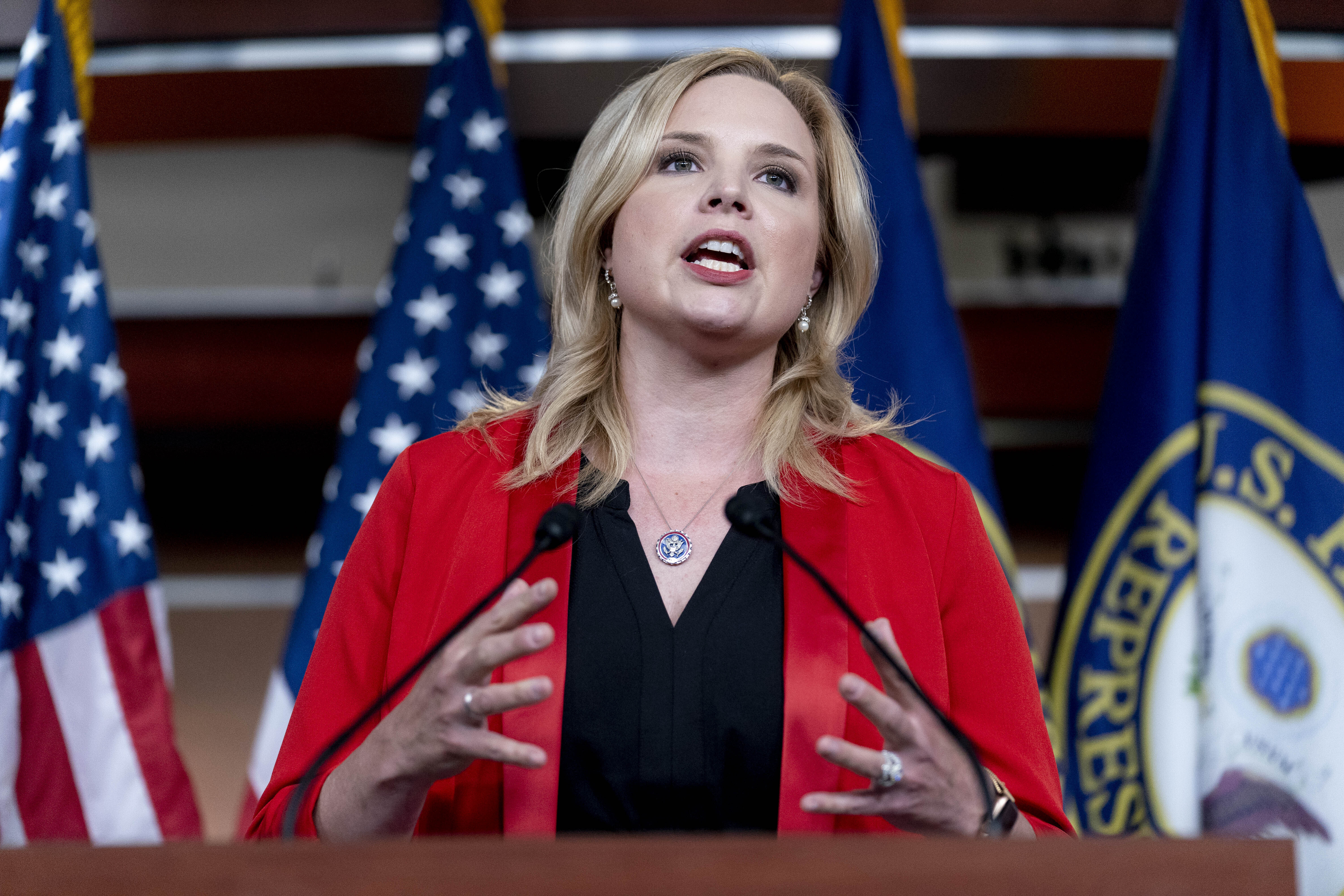 After less than two years in the House, Ashley Hinson’s powerful allies in GOP leadership are already weighing how to elevate her — and by next year, she could be at their table.

The first-term Iowa Republican is hardly the first 30-something conservative woman to don the well-worn mantle of rising star in Washington. She may even take a similar path as another young House GOP leader: Two well-placed Republicans, speaking on condition of anonymity, see Hinson eyeing the conference chairmanship next year — but only if its current occupant, Rep. Elise Stefanik (R-N.Y.), vacates the No. 3 spot for another perch.

While Stefanik made her name in the party boosting Republican women candidates, including Hinson, the Iowan brings a set of skills that line up nicely with the conference chair’s messaging portfolio. A former journalist, Hinson has a reputation for strong media performances and a plate-spinning energy that at times sends her literally running from meeting to meeting. True to form, she deflected questions about her future ambitions.

“My priority is my district, so that’s my focus,” Hinson said in an interview, before declining to get into a yes-or-no question about her interest in seeking the role. “I’m focused on being a really good appropriator … and I am making sure that I am standing up for Iowa’s priorities.”

Hinson first has to survive a strong Democratic challenger this fall in Iowa state Sen. Liz Mathis. But should she do so, and should the GOP reclaim enough seats to flip the House as expected, she has broad support to join leadership from none other than the Republican leader himself.

House Minority Leader Kevin McCarthy, the uncontested frontrunner for speaker if the majority flips, said he could see Hinson on the GOP leadership team because “she’s a natural in that perspective.”

“When she walks into the room, people look to her for leadership,” the California Republican added in an interview last week, praising Hinson as policy-focused, talented on TV, intelligent and an all-around good person.

And asked about her as a future conference chair — with the caveat that it only applies if Stefanik pursues another senior post instead — McCarthy said: “Her talents go right there.” 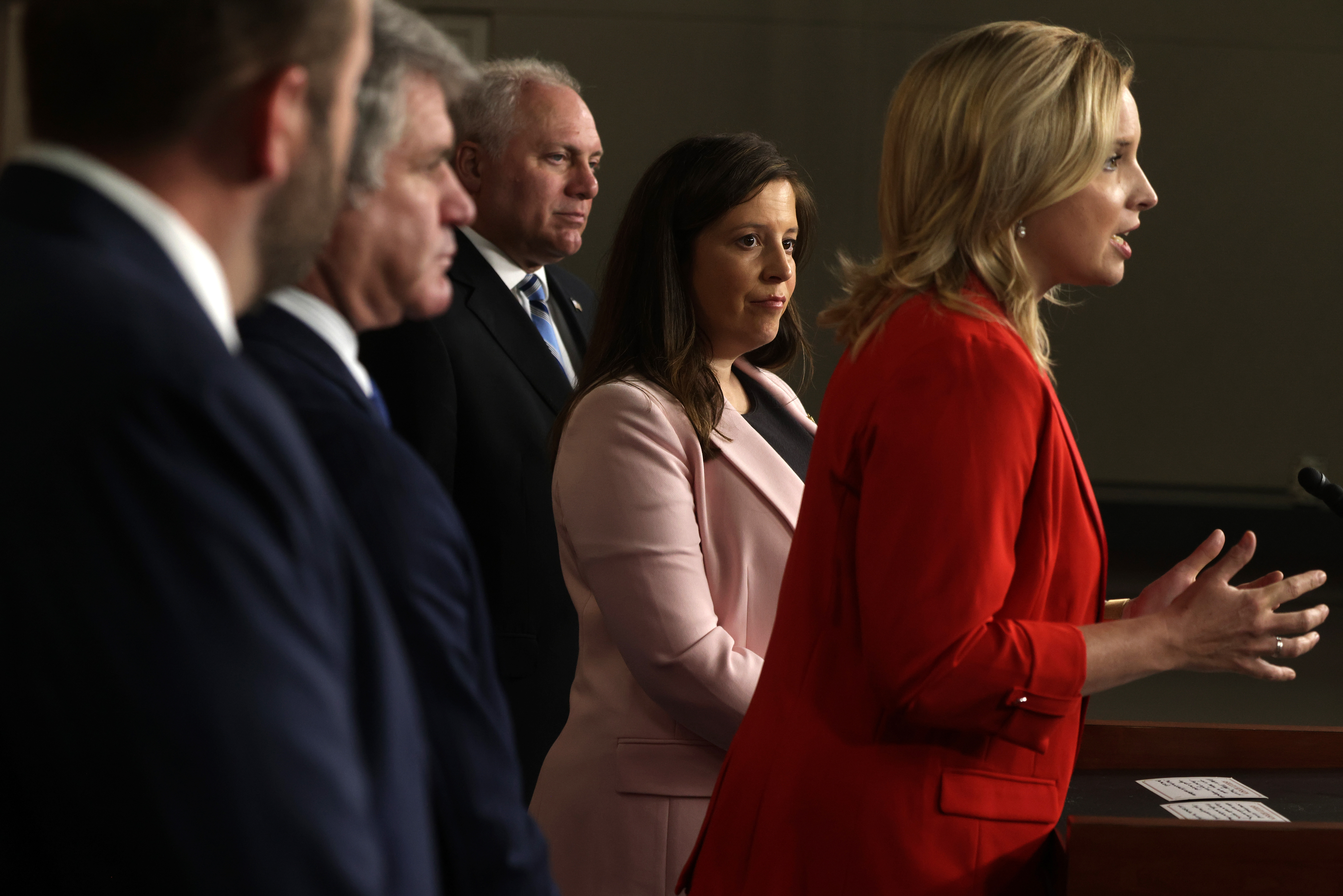 Hinson won her seat last year right from the Iowa state legislature, after ousting Democratic incumbent Abby Finkenauer. She then landed a coveted spot on the House Appropriations Committee, a rarity for a freshman. She quickly authored a school-reopening bill that became a key priority for House Republicans as they pushed for in-person learning amid the coronavirus pandemic.

Perhaps the clearest sign of McCarthy’s interest in spotlighting Hinson came in November, when he tapped her to co-chair the National Republican Congressional Committee’s Young Guns program. Co-led in the past by McCarthy himself, that group is designed to help promising House GOP candidates — a crop Hinson belonged to back in 2020.

Rep. Tom Cole (R-Okla.), her mentor, noted approvingly that her weekly events draw “senior lobbyists” who might take years to pay attention to junior members in the House minority.

Stefanik, the highest-ranking woman in congressional GOP leadership, also credited Hinson as a “legislative workhorse” and “exceptional at communicating our message,” particularly when she “talks about, she’s a mom in a minivan with two young boys.” Like Stefanik, Hinson has sought to reach out to fellow younger Republican women to offer advice on juggling family with career.

But when asked about Hinson potentially joining leadership, Stefanik broadly warned that Republicans should focus elsewhere.

“I’m not engaging in any leadership discussions; nor should our members. We are focused on winning back the majority — and particularly, our freshman members need to [be] because it’ll be their first time serving in the majority,” Stefanik said.

The New Yorker, one year younger than Hinson, was previously seen eyeing a run for majority whip next year, a role that would be open if McCarthy ascended to the speakership and Minority Whip Steve Scalise (R-La.) became the majority leader, as expected. But Stefanik has since backed off of those plans, according to multiple people close to GOP leadership.

And while Stefanik is expected to easily secure the conference chair role again if she seeks reelection, these people say, they believe she has returned to her long-sought goal of leading the Education and Labor Committee in a GOP majority.

That would open the top messaging role for Hinson, in theory. In practice, she will likely face obstacles that include a long list of more senior Republican men who are looking to climb the leadership ladder. Among them are Rep. Jim Banks (R-Ind.), who could also opt to jump into the whip race, and Rep. Mike Johnson (R-La.), currently vice chair of the House Republican Conference.

Johnson said he believes the No. 3 position calls for more experience than a second-term member could deliver.

“A lot of experience is necessary for leadership, particularly with this big [expected] majority,” said Johnson. “And it’s not a slight against her or anybody individually. It’s just, you’ve got to get the most experienced and qualified people, because we have no margin for error.”

Taking the conference messaging helm can also prove tricky, particularly for swing-state lawmakers. Rep. Cathy McMorris Rodgers (R-Wash.), who served in the No. 3 role from 2012 to 2018 while also representing a battleground district, recalled frequently being “lumped” in with positions taken by the other GOP leaders whom she served under.

“I was at those press conferences nearly every week standing by [former Speaker] Paul Ryan … it was like I was swept into whatever positions they were taking or what they had said,” she recalled. “And it felt like it was harder for me to be seen for who I was separate from the speaker’s leadership team.”

Hinson allies argue that it’s advantageous to have a conference chair who can lean on swing-state experience to craft messages for Republicans elected in similar districts, particularly because those sorts of lawmakers will be critical to holding the House in 2024. To win her competitive reelection race, Hinson said she plans to paint Mathis as “very, very liberal” in a newly redrawn district that now leans more Republican.

“Hinson says one thing in Iowa, but goes to Washington and sells out her constituents to climb the political ladder,” Mathis said. “And Iowans can see through that kind of political game.”

Whether or not she seeks the conference chair role, her allies see her rising in the House — or beyond. Sen. Joni Ernst (R-Iowa), who helped recruit Hinson in 2018 and holds a position in Senate leadership, remarked: “If other opportunities come up in the future, it’s certainly something that she should look at.”

Cole, a former campaign arm chair, said that he could see her working alongside Ernst in the future.

“I told her not too long ago I was really glad that Sen. [Chuck] Grassley ran again,” said Cole. “Because otherwise, I think she’d be running for the U.S. Senate. She’s a potential senator or governor in Iowa, without a doubt.”