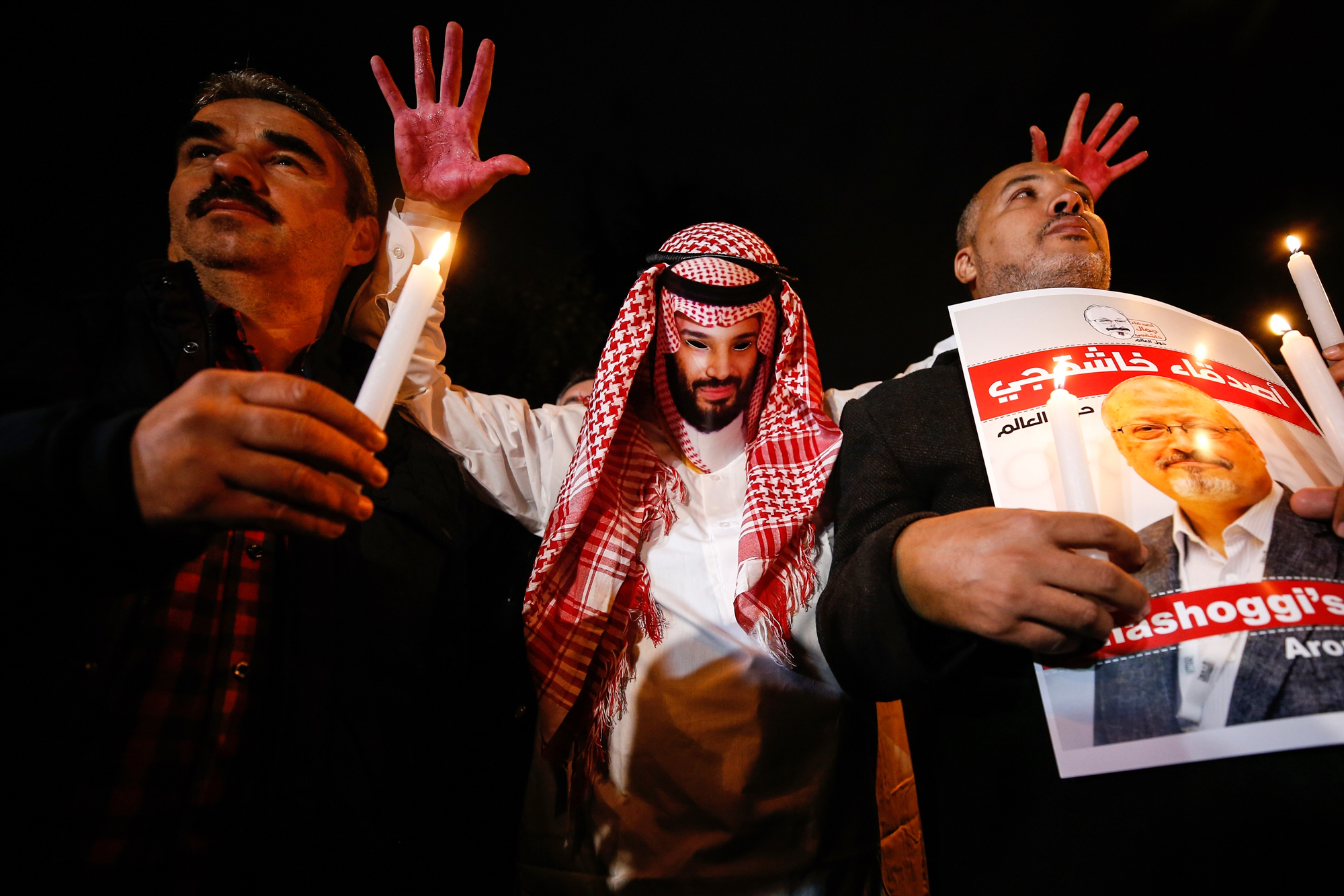 Saudi Arabia has an image problem.

To solve it, one of the biggest public relations firms in the business proposed an out-of-the-box idea. What if the kingdom hosted an entire week of “The Daily Show” from different locations in the country; or if the Hollywood elite came to the kingdom for a Golden Globes-like show rather than staying put in Beverly Hills; or the Saudis created some sort of partnership with the Coachella musical festival that draws the L.A. influencer crowd every year?

Trevor Noah will not be providing a Moment of Zen from Jeddah, at least any time soon. But the prospect of it happening was just one of many proposals prepared by U.S.-based PR giant Edelman as part of a larger attempt to help the Saudis market the kingdom as a new, modern-minded tourism and culture destination.

In a previously unreported 109-slide proposal filed, per law, with the Department of Justice this June, Edelman proposed, what it dubbed, a five-year-long “Search Beyond” campaign.

In it, the Saudis would develop partnerships with celebrities and pursue opportunities that could lead to productions filmed throughout the kingdom. The firm pitched partnering with MTV and teaming up with major institutions. It also suggested getting international celebrities like Priyanka Chopra and DJ David Guetta to serve on the board of the campaign.’ 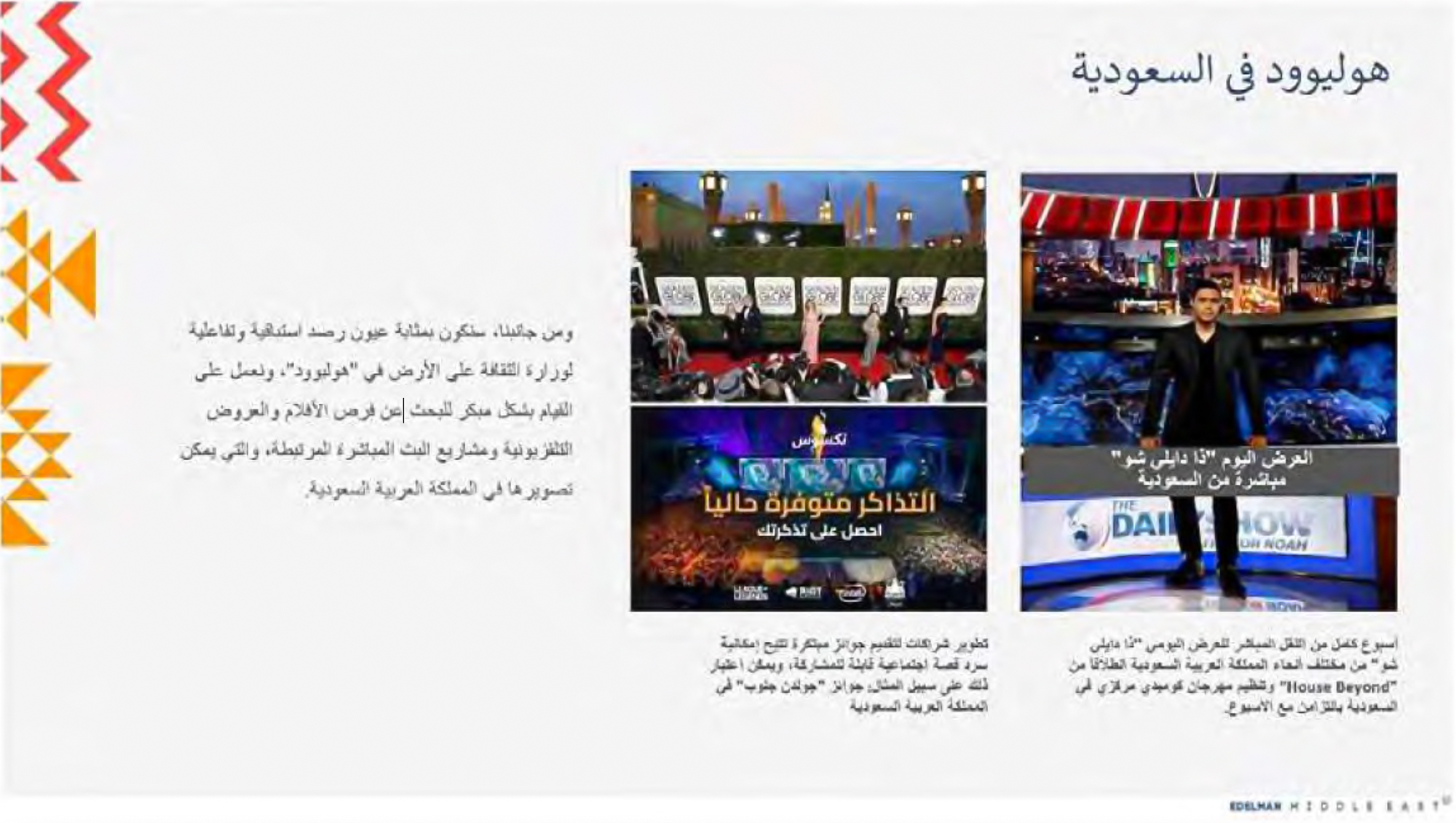 The proposal, which was made in Arabic and professionally translated for POLITICO, illustrates the lengths to which the Saudis have been willing to go to cast off the “pariah” status that President Joe Biden and others gave to them in the wake of the 2018 killing and dismemberment of Washington Post journalist Jamal Khashoggi. U.S. intelligence has said Saudi’s crown prince, Mohammed bin Salman, approved the murder. Biden visited Saudi Arabia on Friday, during which he met with the crown prince and exchanged a fist bump.

“[Mohammed bin Salman] tried to launder his reputation, whitewash it through bringing in celebrities to hold concerts, to sportswash it by buying soccer clubs, and anyway he can sort of try to rehabilitate his reputation and his image,” said Seth Binder, director of advocacy at the Project on Middle East Democracy. “I think to my mind, President Biden’s trip is that sort of final complete rehabilitation.”

A spokesperson for Edelman declined to provide additional details on its deal with Saudi Arabia, for which they are being paid 2,953,125 riyals, or about $787,000, over a year.

“Due to confidentiality agreements with all our clients, we are unable to comment beyond information that is publicly available,” the spokesperson said.

Fahad Nazer, a spokesperson for the Saudi embassy in the United States, asked POLITICO to send its inquiry to his government email but did not respond to questions directed there.

The Saudis have thrown copious amounts of money behind improving their image internationally. Among the expenditures includes a new professional LIV Golf Series tournament, which will host events at clubs owned by, among others, former President Donald Trump. The tour was derided as “sportswashing,” or the use of athletics to mend reputation, and raised eyebrows for enticing Phil Mickelson, Dustin Johnson and others to participate with its sizable prizes. The Saudi-sovereign Public Investment Fund, with others, also purchased the United Kingdom-based soccer team Newcastle United last year, over objections. 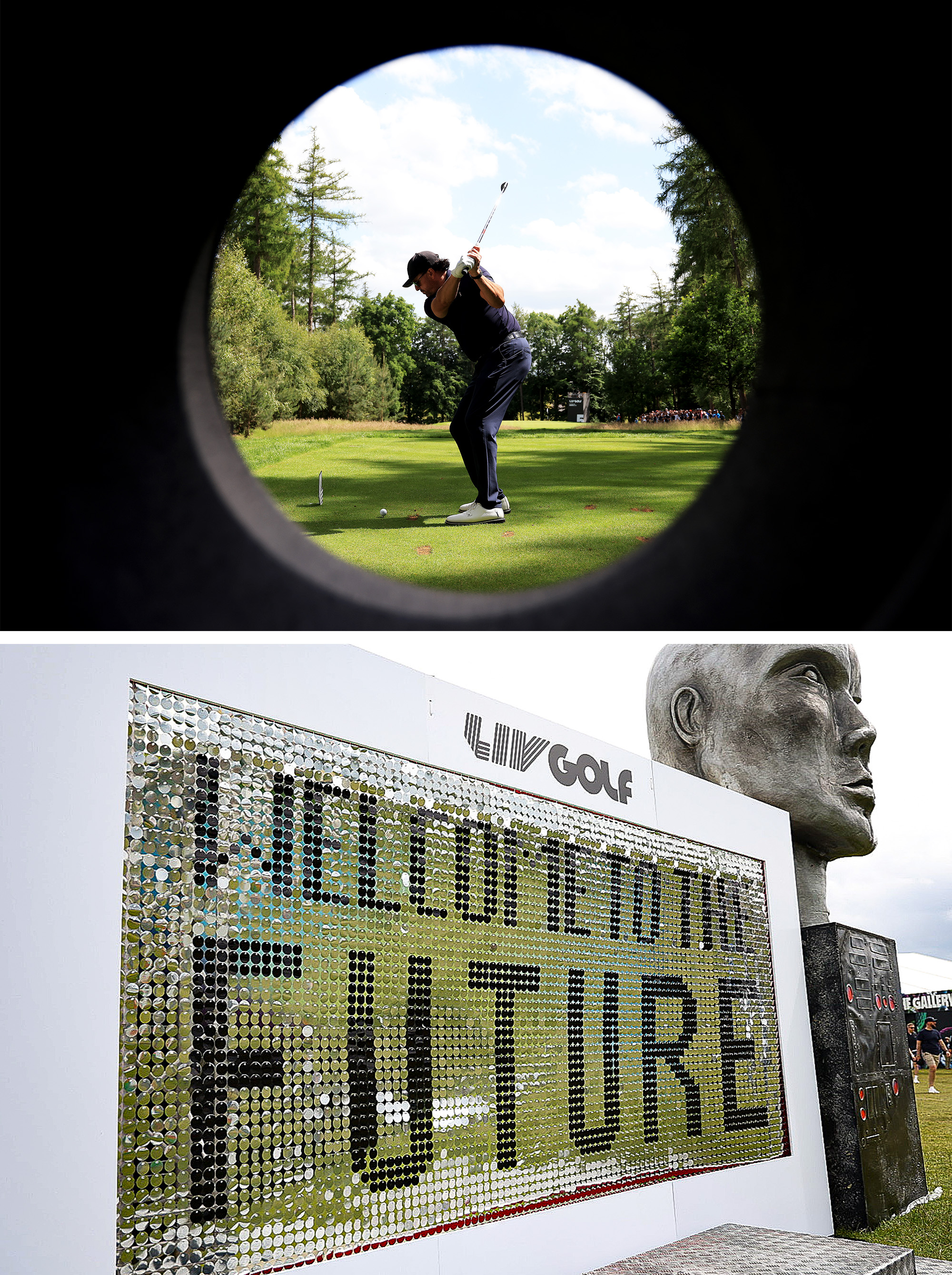 Edelman has a history of work in and with Saudi Arabia, including a campaign to promote the professional networking company LinkedIn as a “platform that amplified the voices of Saudi career women.” In 2020, Edelman registered with the DOJ to represent the Saudi Basic Industries Corporation, a company producing chemicals and other materials that is majority owned by the Saudi government, in a deal that was worth roughly $6.7 million. It has also done public relations work for NEOM Company, which is developing the new Saudi “smart city.”

But the current contract could be one of the most lucrative among its partnerships with the kingdom in recent years, according to Foreign Agents Registration Act (FARA) filings. Edelman, an agency under Daniel J. Edelman Holdings known as United Entertainment Group, broke down the costs for the contract into four categories: research, planning and strategy; media relations and strategic partnerships; social media plan development and outreach; and client management and reporting. Within those categories, Edelman promised to, among other things, “monitor online conversations and media coverage to identify ‘friends’ and detractors,” “Commence a relationship building programme of US based media contacts,” and host “Monthly Client Meetings.”

It’s not uncommon for firms to help connect influencers and foreign governments. Lawyer and P.R. professional Lanny Davis recalled one foreign government asking for the Clinton White House alum to connect it with his friend and actor, Rob Reiner, who also had ties to Hillary Clinton. Bryan Lanza, a partner at Mercury and former communications director for President Donald Trump’s transition team, said these kinds of partnerships between governments and celebrities are becoming more and more frequent.

“You can’t ignore the money,” Lanza said. “Celebrities will make more money pitching a foreign government than making a film these days.”

Ben Freeman, a research fellow at the Quincy Institute for Responsible Statecraft, noted that this was far from the first time the kingdom has used pop culture for public relations. He pointed to the crown prince’s facetime with Oprah Winfrey and Dwayne ‘The Rock’ Johnson on a visit to the United States years ago.

“It’s the next step in their reputational laundering campaign, and whether it’s through sports or whether it’s through Hollywood connection — you name it — this is something they’ve been trying to do for years,” Freeman said. “I think that this lobbying campaign … is a big part of the reason why Biden was able to do this trip, why this was at all possible. It’s because of places like Edelman and the other folks working for the Saudis.”

The contract that Edelman signed with the Saudi government underscores the changing attitudes of U.S. companies towards the middle east nation. In Washington, some who once balked at working with the kingdom have steadily dropped their objections.

The lobbying and communications shop BGR dropped Saudi Arabia in 2018. But in May, the firm finalized a deal to represent the non-governmental Islamic organization Muslim World League, to which the kingdom is “the leading contributing member.” A number of other firms have also inked contracts with Saudi Arabia since a K Street exodus in 2018 after the Khashoggi murder. Earlier this month, Edelman also filed paperwork with the Department of Justice, which is required under the Foreign Agents Registration Act, to conduct public relations for a Riyadh-based advertising company working for the Saudi Data Artificial Intelligence Agency. The roughly three-month contract is worth 779,973 riyals, or about $208,000.

When asked why the firm changed its position, Jeff Birnbaum, a BGR spokesperson, said the Muslim World League was an NGO and not part of the Saudi government, adding that “[i]t has long been an advocate for religious tolerance and an opponent of religious extremism.” He added that the firm’s hiring was not related to Biden’s visit to Saudi Arabia.

Edelman’s proposed “Search Beyond” campaign provides a window into how mega PR firms believe controversial clients can ingratiate themselves with modern media consumers. In the pitch to the Saudi Ministry of Culture, the company touts the success of a campaign that its United Entertainment Group spearheaded for the Empire State building, pointing to its ability to recruit celebrities like Taylor Swift, Kylie Jenner and David Beckham to help “transform the most famous building in the world into a material for cultural dialogue all over the world.” 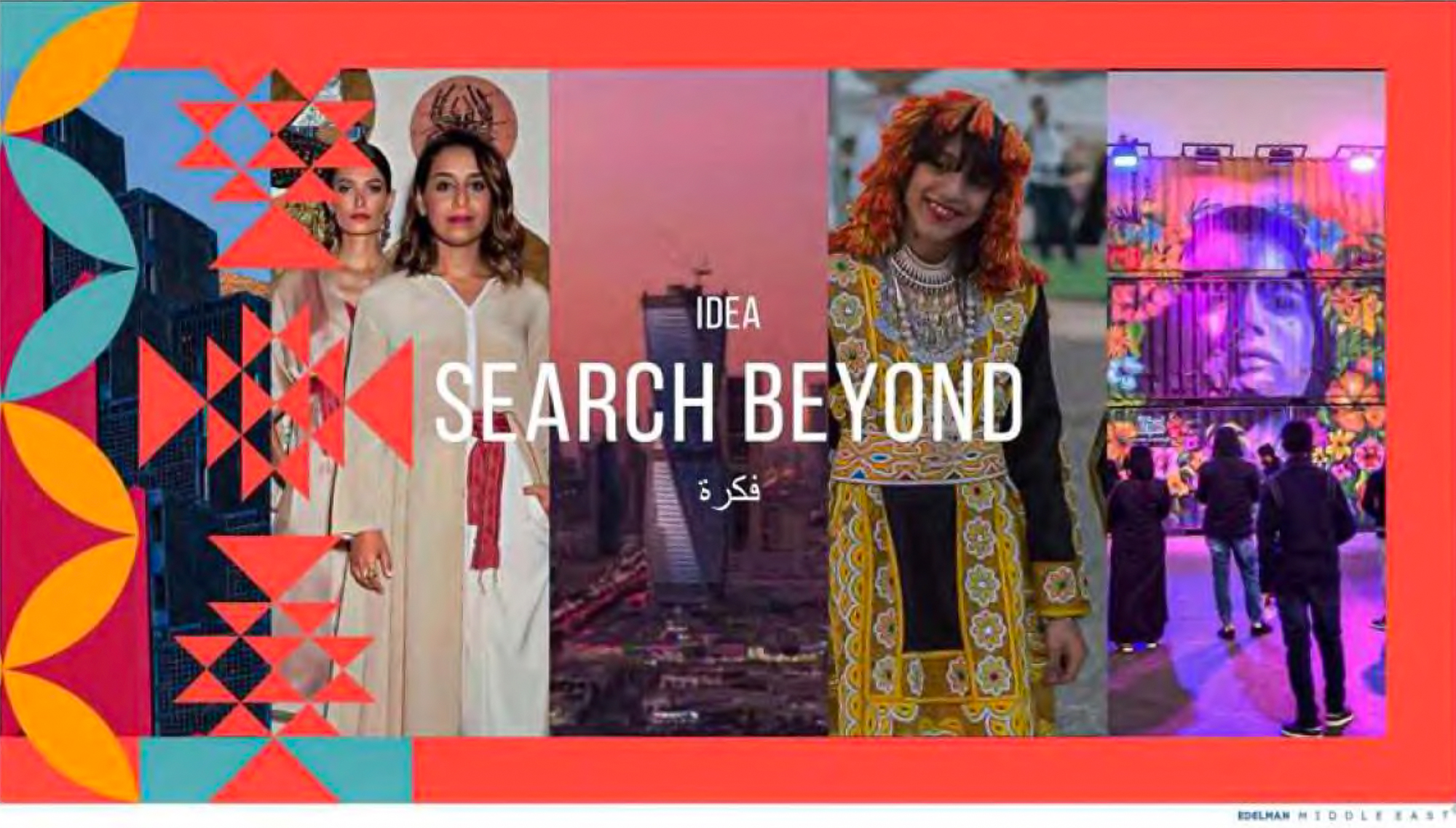 In addition to targeting a U.S. audience, the campaign also would target markets in the Middle East, the United Kingdom, Germany, France and elsewhere. Influencers and the use of social media — be it Twitter, Instagram, or other platforms — appear to be a key part of the effort.

As part of the campaign, the kingdom would create a literal base for influencers, known as House Beyond, and broadcast from the location, potentially on a network like MTV. Edelman said in its pitch it was already working to launch a partnership with the global art festival Art Basel to include in the Search Beyond campaign, according to the translation of the slides. It said it could do the same with the Coachella, Bonnaroo and South by Southwest festivals.

Yun Lee, a spokesperson for Art Basel, said the organization “does not have any form of partnership in place or in development with Edelman.” A spokesperson for South by Southwest said it had not been approached by Edelman or Saudi Arabia, and when asked about whether it would accept Saudi funds, refused “to answer a hypothetical.”

An MTV Entertainment spokesperson said neither MTV nor the Daily Show were involved in the project but declined to comment when asked if the company would be willing to work with Saudi Arabia.

In addition to Guetta and Chopra, Edelman also proposed collaborations with DJ Steve Aoki, the actor Jet Li, Netflix’s “Never Have I Ever” actress Maitreyi Ramakrishnan, and social media influencer Olivia Culpo, a former Miss Universe who Edelman noted once attended a music festival in Saudi Arabia. Among other institutions, the firm suggested the Saudis partner with the Metropolitan Museum of Art. But Ken Weine, the Met’s chief communications officer, said he was not aware of Edelman’s proposal. He did not respond when asked if the museum would accept Saudi funds. 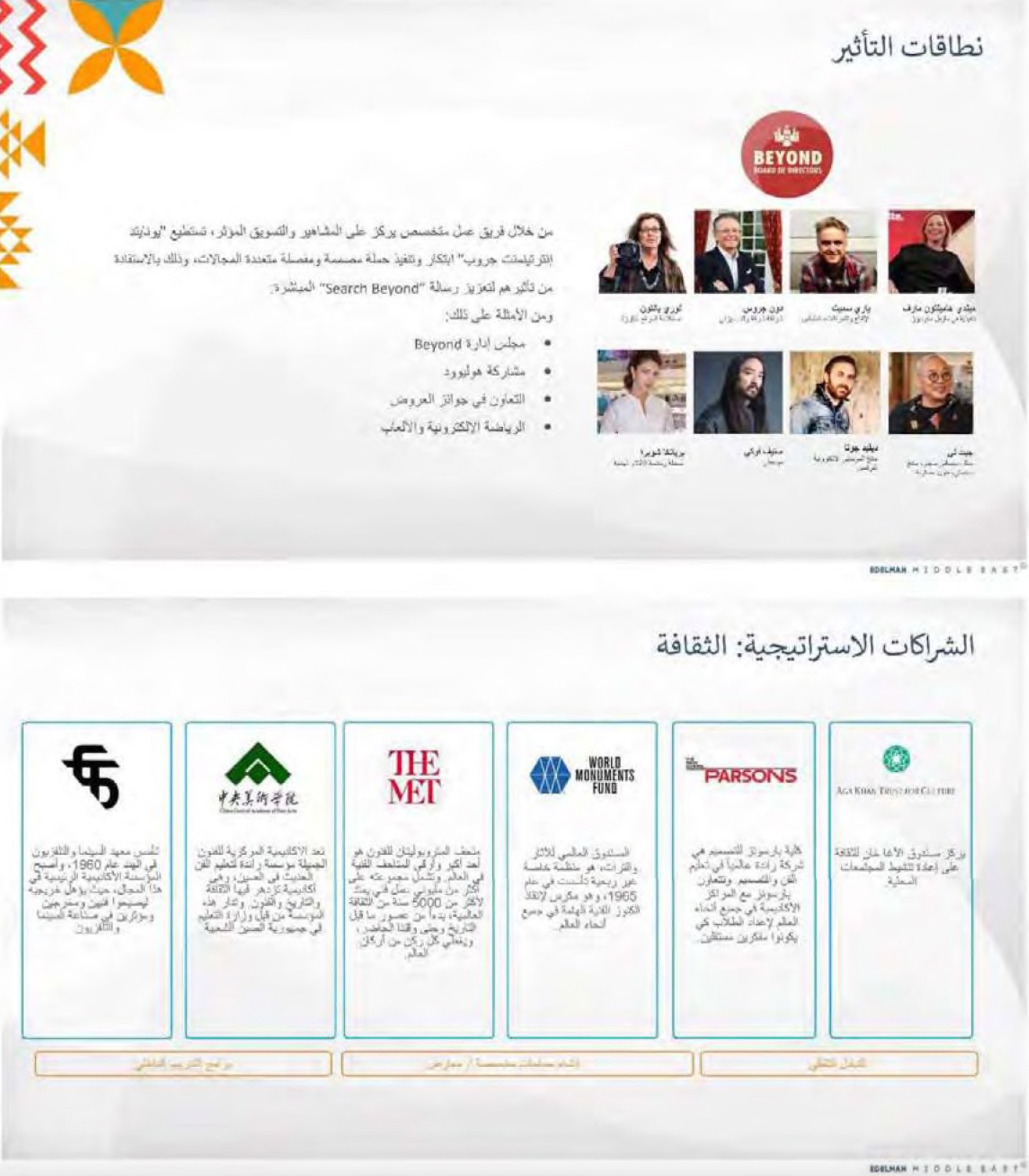 But Edelman also noted that the kingdom faces specific hurdles in improving its image. One slide reads, according to the translation: “Currently the Kingdom is not seen as rich and diverse from the cultural respect,” under which it includes a word cloud of “Traditional concerns around the situations in the Kingdom”—“CONSERVATIVE,” “RESTRICTED,” and “SAFETY” in large font, among others.

Elsewhere, Edelman put together a sample graphic for the global reputation risks that the Saudis might face. Among them: “Woman rights issues,” “Violations of human rights,” “Opinions of conservatives” and “Religious freedom and fanaticism increase.”

One former Edelman employee, who was granted anonymity to discuss sensitive matters, noted that the selection of celebrities like Chopra and Aoki was likely strategic. The person pointed to Chopra’s feminist activism, suggesting that the kingdom was trying to curry favor with a female audience amid longstanding criticism of its record on women’s rights.