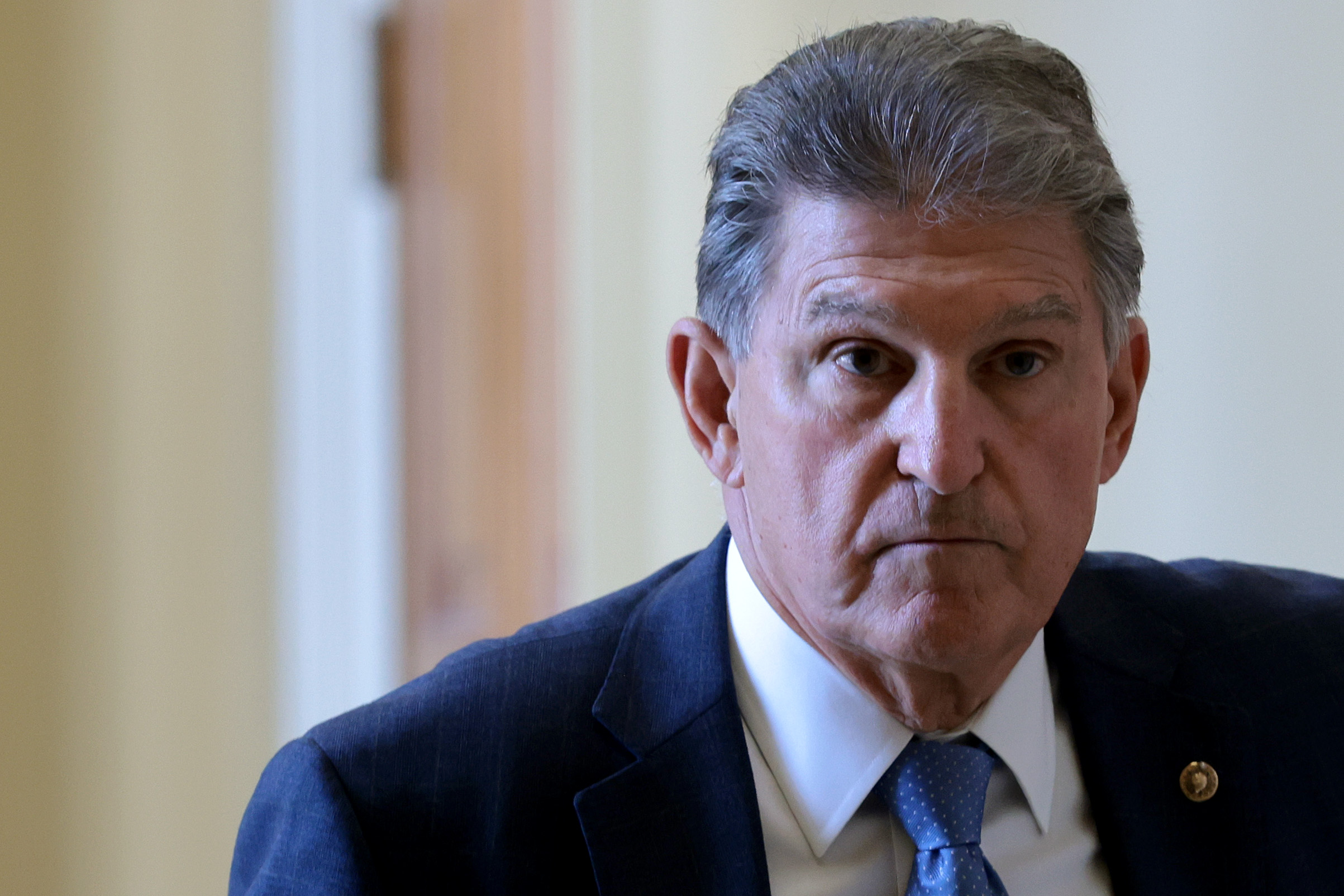 Democrats and climate activists reacted with shock and anger at Sen. Joe Manchin’s rejection of climate and energy investments under a party-line spending package — blasting the West Virginian’s move as one that would doom not just President Joe Biden’s agenda but the future of the planet.

The news comes just two weeks after the Supreme Court curbed the Environmental Protection Agency’s power to regulate greenhouse gases from power plants, and as the Biden administration’s climate strategy has taken a backseat to efforts to ramp up oil and gas production to fend off inflation.

The upshot is that the United States, the world’s No. 2 producer of greenhouse gas pollution, may find itself with little ability to address the problem — even after the Democrats who control the White House and Congress declared it one of their highest priorities.

“I struggle to contemplate what single elected official in American history will do more to cause more massive suffering,” Sam Ricketts, co-founder and co-director for the environmental group Evergreen Action, said after news of Manchin’s rejection broke Thursday night. “There’s numerous examples, but if you want to look decades out from now, this decision by this one senator from West Virginia is going to have repercussions that affect millions, if not billions.”

Democrats have struggled for months to pass a slimmed-down climate and energy package as part of a budget reconciliation bill that would require the support of all 50 Senate Democrats, including Manchin. He had previously said he could reach agreement on climate if legislation included elements helping both renewables and fossil fuels.

But Manchin informed Senate Majority Leader Chuck Schumer on Thursday that he wouldn’t support the investments in climate and energy ahead of the August recess, and his office pointed to his concerns about stoking inflation in a statement.

Manchin on Friday disputed reports that he had walked away from the talks completely, instead saying he is waiting for July inflation figures to make a determination and insisting Democrats could still vote on a reconciliation package with climate provisions in September. But that is past the July deadline that Schumer had set, and it forces Democrats to choose between making a deal now to lower prescription drug costs or hold out for a larger bill in September.

“I can’t make that decision basically on taxes of any type and also on the energy and climate because it takes the taxes to pay for the investment in the clean technology that I’m in favor of,” Manchin said during a radio interview on West Virginia’s MetroNews. “But I’m not going to do something and overreach that causes more problems.”

Manchin’s Democratic colleagues, though, are dubious about his intentions and prefer to vote on a bill before the August recess, given the members will be focused on campaigning for November’s midterm elections after that.

“It is hard to feel optimistic there is a way to getting to yes with Sen. Manchin on emissions reductions and clean power given the last year-and-a-half,” Sen. Tina Smith (D-Minn.) said in an interview. “Sen. Manchin is joining every single Republican in stopping the efforts to cut emissions and speed up this transition to clean energy. That is his legacy. I believe there needs to be accountability for that in the ballot box.”

“Given the chance to address the pressing needs for the country you can always count on Sen. Manchin not to decide and punt a decision to later. I don’t have reason to think that would end,” he said in an interview. “If you choose not to decide you still haven’t made a choice.”

Manchin had already killed an earlier, larger iteration of the party-line package late last year, even after other Democrats had begun dismantling it to meet the senator’s demands. Those concessions included nixing a program — a key priority of Smith — that among other provisions would have paid money to utilities that supply more clean power and imposed penalties for those that don’t.

What largely remained intact was a broad package of clean energy tax incentives designed to expand and extend long-term subsidies for renewable energy and emerging technologies such as hydrogen, carbon capture and small nuclear reactors. Democrats had recently scrapped from the subsidies a mechanism that would make it easier for companies to gain access to the federal incentives by receiving direct payments rather than tax incentives, and it had seemed that the remaining sticking point revolved around incentives for electric vehicles.

Still, people familiar with the negotiations had expressed optimism in recent days that Democrats were nearing a deal on the clean energy provisions. Senate Finance Chair Ron Wyden (D-Ore.) said in a statement Thursday night that “nearly all issues in the climate and energy space had been resolved.”

Manchin said in the radio interview Friday that talks had been “good,” with staffs working diligently for the past few months. Still, Manchin seemed to sour on the package earlier this week amid a historic rise in inflation, telling reporters on Wednesday that anything Democrats pass needs to be “scrubbed” to make sure it’s not inflationary.

Rep. Earl Blumenauer (D-Ore.), a member of the House Ways and Means Committee, responded Friday that the provisions included in the package would help combat inflation over time.

“If we abandon the approach that we’ve taken, we will lose markets internationally and put us further behind,” he said in an interview. “Ultimately, having these provisions strengthens the economy.”

News of Manchin’s rejection also left environmental activists and Democrats to pick up the pieces to try to find a potential path to cutting emissions. Without action from Congress, however, Biden’s goal for curbing U.S. greenhouse gasses 50 to 52 percent below 2005 levels by the end of this decade appeared to be slipping away.

“We will be way off track and have no plan to limiting warming to the degree that’s necessary,” said Leah Stokes, a University of California-Santa Barbara professor who worked with Democrats on climate provisions of the reconciliation package. “I am sure the Biden administration will use every regulatory tool in the toolbox and use every executive action they can, but ultimately we need Congress to act. But one senator who clearly is in bed with the fossil fuel industry is condemning generations of Americans on this planet to a broken Earth, including his own grandchildren.”

Absent new policy action, a Rhodium Group report this week found that the U.S. is falling short of its targets and is on track to reduce emissions by just 24 percent to 35 percent below 2005 levels by 2030. Scientists have said that is too little to prevent global warming from reaching catastrophic levels.

“As we regroup, obviously there is no giving up on the climate crisis and no giving up on humans’ ability to adapt and address major challenges. But the path is a lot harder,” said Christy Goldfuss, senior vice president for energy and environment policy at liberal Center for American Progress.

Manchin’s move also appeared to leave the administration grappling with what it’s next step should be. “It’s more of a re-evaluation kind of day,” said one federal agency official, who spoke on condition of anonymity.

John Podesta, founder and chairman of the Center for American Progress, said the administration had previously worked up an action plan before last year’s international climate talks in Glasgow, Scotland, that it should now try implement.

“They need to dust that off,” he said. “The tragedy here of course is everything becomes more difficult, less cost effective without this investment package.”

Talks are also likely to start churning on a potential tax extenders package to salvage the existing subsidies for clean power. But that would require the cooperation of Republicans, an unlikely prospect.

“It’s hard for me to see much incentive to help save Democrats from themselves so close to the election,” said Sen. Kevin Cramer of North Dakota, a Republican who took part in bipartisan discussions on energy and climate policy with Manchin earlier this year.

Climate activists are also pressing Biden to expand his use of executive action and to close the door on fossil fuel projects, such as ConocoPhillips’ Willow oil project in Alaska and plans for a new offshore drilling program, which both had emerged as potential trade-offs for Manchin’s support.

“The drilling decisions being made right now are about development and production in years if not almost a decade into the future,” Goldfuss said.

Gregory Wetstone, president and CEO of the American Council on Renewable Energy, said lawmakers also need to salvage as much of the clean energy tax package as possible, whether through the existing reconciliation bill or a different legislative vehicle, or else risk stalling the growth of renewable energy.

“Tax incentives for renewable energy phase down and largely out in today’s tax code, while century-old fossil fuel incentives remain permanently in place,” he said.

Evergreen Action’s Ricketts called for consequences to Manchin specifically, including removing him as chair of the Senate Energy and Natural Resources Committee. “Frankly, I don’t think he has any business being Energy Committee chairman if he’s unwilling to move energy policy, even as his colleagues bend to his demands,” he said.

Sen. Martin Heinrich (D-N.M.), a member of the panel, also questioned Manchin’s leadership Friday, tweeting that his refusal to act is infuriating “makes me question why he’s Chair of ENR.”

Ricketts added Democrats will need to be “scratching and clawing for every inch” going forward, including pressing for the White House to use executive actions and pressing state governments to lead the charge.

But even action from the administration faces its own daunting prospects following last month’s Supreme Court decision that restricted the EPA’s authority to curb emissions without “clear” direction from Congress. The implications of that ruling have already started to emerge in other cases across the country where opponents are challenging the administration’s regulatory actions.

Still, climate hawks say that should not stop the administration from aggressively moving forward in the absence of action from Congress.

“Every single agency and department across the administration has different actions they can take. West Virginia vs. EPA did not change that,” Goldfuss added.

Zack Colman contributed to this report.