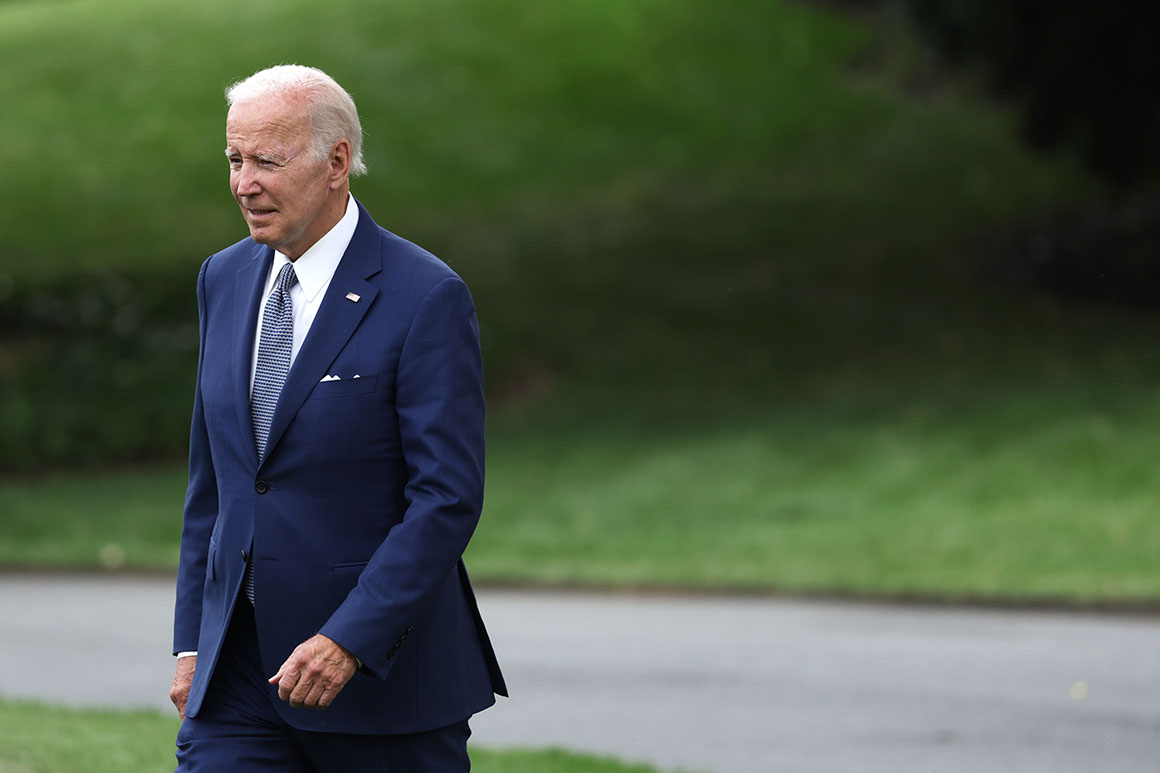 A left-wing group that worked in 2020 to persuade progressives to support President Joe Biden is now preparing to turn on him, organizers told POLITICO, with plans to launch a public pressure campaign to block his renomination in 2024.

The effort, by RootsAction.org, is the latest sign of unrest among Democrats about Biden, whose job approval rating has cratered during a punishing midterm election year. RootsAction, with an email list of about 1.2 million people in the United States, said it plans to spend six figures on a “#DontRunJoe” campaign, with digital ads starting in early nominating states on Nov. 9, one day after the midterm elections.

Though prominent Democrats have said they will support Biden if he seeks reelection — as Biden has said he plans to do — rank-and-file Democrats appear far less unified, roiling the party halfway through the midterm year. According to a New York Times/Sienna College poll released on Monday, nearly two-thirds of Democratic voters say they want someone else to be the party’s nominee in 2024.

“Unfortunately, President Biden has been neither bold nor inspiring,” RootsAction said in a prepared statement shared first with POLITICO. “And his prospects for winning re-election appear to be bleak. With so much at stake, making him the Democratic Party’s standard bearer in 2024 would be a tragic mistake.”

It’s possible that Biden, if he runs in 2024, would quickly coalesce support from throughout the party. He accomplished that in 2020, largely winning over progressives after defeating Sen. Bernie Sanders (I-Vt.), among other liberals, in the primary. Sanders, the progressive icon RootsAction initially supported, has said he will support Biden if he runs again.

But Biden appears far weaker today than he did following his defeat of Donald Trump. His job approval rating has fallen below 39 percent, according to the FiveThirtyEight polling average, worse than Trump’s at this point in his presidency. And confidence in Biden has been waning among young voters and people of color, key Democratic constituencies.

In both Democratic and Republican circles now, there is widespread uncertainty about the state of each party’s likely standard bearer in 2024, with Trump appearing less like a foregone conclusion on the GOP side in recent weeks.

On the left, at least some Democrats have had enough of Biden, too. Following Sanders’ defeat in the 2020 primary, RootsAction recruited progressives critical of Biden to appear in appeals to leftist Democrats to cast ballots for him, part of the group’s “#VoteTrumpOut” initiative.

Two years later, the group said that if Biden does run, he will “have a fight on his hands.”

“Our immediate goal within the Democratic Party is to ‘dump Biden,’ much as the anti-Vietnam–War forces among Democrats set out to ‘dump Johnson’ in 1967, which led antiwar candidates Eugene McCarthy and Robert Kennedy to enter the race,” RootsAction says in a FAQ on its “DontRunJoe” website.

“If you’re in touch with Democratic Party activists, the frustration is palpable,” said Jeff Cohen, a co-founder of RootsAction. “Biden appears to be dithering while progressive achievements just go out the window, from abortion rights to the Clean Air Act.”

The White House did not immediately respond to a request for comment.