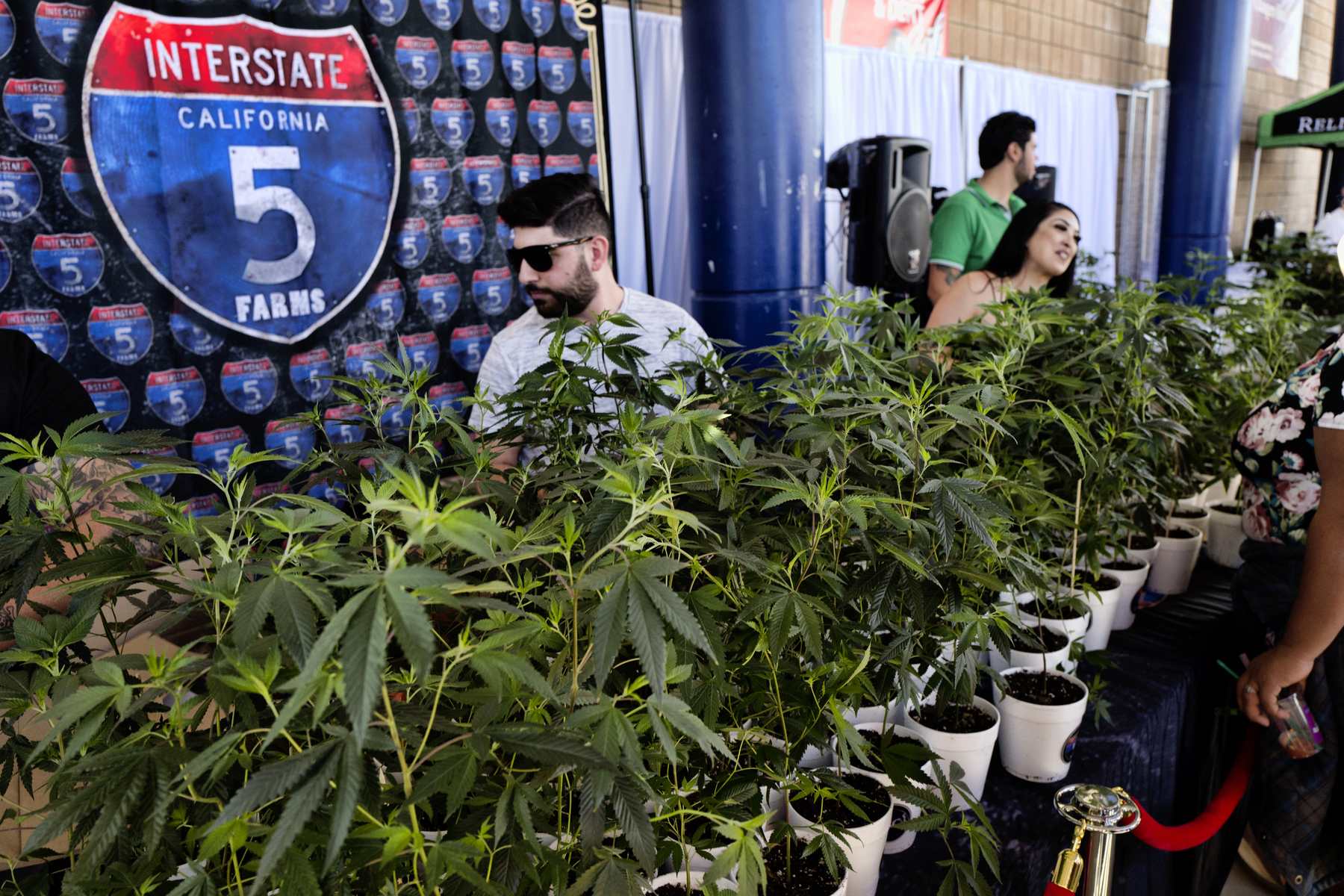 LOS ANGELES — California’s licensed cannabis businesses are getting a tax cut — and they are disappointed about it.

Democratic Gov. Gavin Newsom raised hopes in the cannabis world this year when he called for an overhaul of the state’s pot taxes. But the cuts that cannabis-friendly lawmakers managed to eke out were modest — far short of the boost they hoped to deliver to legal weed businesses getting outcompeted at every turn by the booming underground economy. Many see it as a missed opportunity.

“We’re going to continue to fuel the illicit market until we acknowledge that there’s over regulation, over taxation of something that we claim we want to see succeed, a legal cannabis market,” said state Sen. Scott Wiener (D-San Francisco) in a floor speech critiquing the tax-reform bill.

Frustrations have been building steadily since voters legalized recreational cannabis in 2016, with Newsom’s backing. Rather than watching businesses rush to enter the market, the nascent legal industry has languished behind an expansive network of off-the-books pot shops and tucked-away farms that fuel a multi-billion-dollar enterprise.

For licensed operations trying to survive, the reason is simple: The taxes are too high.

The legislation Newsom signed into law last month won’t lessen the tax burden for many businesses, at least for very long. It eliminates a weight-based tax for cannabis growers, but leaves a 15 percent tax on retail sales — and gives state officials the authority to eventually raise retail taxes to make up for the lost cultivation revenue.

“This is actually a pretty good landing spot, knowing the politics, but does it solve the industry’s problems? Hell no, it doesn’t,” said Adam Spiker, executive director of Southern California Coalition, a cannabis trade association.

Uprooting an entrenched illicit cannabis market continues to be a problem nationwide, despite three-quarters of states having legalized either recreational or medical sales. Underground purchases were worth $70 billion in 2021, compared to $26.5 billion for the legal industry, according to estimates from New Frontier Data.

Nowhere is the problem more pervasive than in California, where the unlicensed market continues to not only exist, but thrive, because of a unique confluence of factors. Many of the businesses that operate without licenses today were part of a decades-old medical market that flourished under relaxed medical regulations voters approved through Proposition 215 in 1996, and still use that network to move products. And more than 60 percent of cities and counties still ban all retail marijuana businesses, according to data from the California Department of Cannabis Control, creating wide swaths of the state where it’s difficult for consumers to access legal weed.

Roughly 1,000 brick-and-mortar pot shops serve the state’s legal market, along with 481 permitted retail delivery services. That’s nowhere close to the 3,000 unlicensed retailers and delivery services that were estimated to operate in California as of 2020, according to a market analysis by Marijuana Business Daily.

Licensed businesses also say the extra costs tacked onto their products due to strict testing and packaging regulations make it hard to compete with their underground competitors, who offer nearly identical items at steep discounts.

California’s cannabis tax-reform law came out of lengthy negotiations between the industry, labor unions and a coalition of healthcare, youth advocacy and environmental groups that are guaranteed a portion of cannabis revenues — and fervently oppose any tax cuts that could shrink that pot.

It includes a handful of new tax credits that reward weed businesses with strong labor practices and operations in so-called “social equity” programs, which are designed to support communities disproportionately harmed by drug criminalization. The changes also simplify a convoluted system for paying excise taxes, which industry leaders say will give shop owners more freedom to charge what they see fit for individual items.

That a deal was reached despite so many moving parts was hailed as a tactical victory by cannabis industry groups. But to some, the win felt hollow.

Wiener, a veteran lawmaker who has recently become more involved in cannabis legislation, said he “very reluctantly” voted for the bill, mostly because of the new tax credits it establishes for employers who offer competitive wages and benefits and businesses that get fee waivers through social equity programs. Qualifying retailers would also be allowed to keep a portion of the excise taxes they’re required to pay to the state, effectively dropping their tax rate to 12 percent.

But the state senator didn’t hide his frustration with the negotiations around the bill, saying the Newsom administration focused heavily on helping cannabis growers rather than other segments of the market. “From early on,” Wiener said, “the administration — and I’ll never fully understand why — decided that we needed to provide comprehensive relief to cultivators, but far less relief to retailers.”

State Sen. Steven Bradford (D-Gardena) echoed this criticism, saying that the deal offers equity businesses “meager crumbs with the hopes that they will remain quiet.”

Reducing taxes on the cannabis industry has proven to be a minefield for the administration. That’s because a wide range of non-cannabis organizations directly benefit from cannabis tax revenues, including childcare and health programs represented by the powerful Service Employees International Union — one of Newsom’s top supporters. The bill guarantees at least $670 million in annual funding for those programs, and even puts aside $150 million from the general fund to backfill any lost revenues.

But the cannabis bill also contains non-tax provisions: It creates new penalties for landlords who knowingly make their properties available to illegal cannabis operations and earmarks $20 million to help cities and counties set up retail pot markets. Department of Cannabis Control Director Nicole Elliott hailed the deal as “some of the most significant reforms to our cannabis policies in years.”

“Ultimately, these policies strengthen the legal market and further the intent of Proposition 64,” she said, “including by continuing important investments in vital programs.”

The new law has received a positive reception from cannabis farmers, who will not only see their tax burden disappear, but will now also have more viable products to sell. Kristin Nevedal, manager of Mendocino County’s cannabis program and co-founder of the International Cannabis Farmers Association, said that’s because some products, like low-grade flower, faced such an imbalance in value compared to the tax rate that they were either discarded or mislabeled as another part of the plant, like leaves, which fetch little on the market.

Still, she said, eliminating the cultivation tax without lowering the retail tax rate or adding dispensaries will limit growers’ relief. That’s because legal growers have seen the value of their harvests plummet in recent years due to an oversupply of product compared to available retail shelf-space, a problem that won’t go away with the cultivation tax.

“I’ve always been somewhat skeptical that eliminating the cultivation tax would immediately bolster the economic viability of cultivation sites,” Nevedal said, while stressing that she is more hopeful than before.

Amy Jenkins, a top cannabis-industry lobbyist, said she hopes the new tax system will lead to a boost in sales and tax revenue, arming the industry with evidence to justify another tax cut. After years of tax-relief bills failing in the Legislature, she argued, it was “imperative that some of the reforms outlined in this bill were implemented immediately.”

Spiker, however, said he’s skeptical that lawmakers would be willing to make another adjustment to tax rates in the near future.

“Try going back next legislative season saying, ‘Hey, we need to reduce it more.’ It’s not going to happen,” he said. “They’d be admitting they messed it up the first time.”