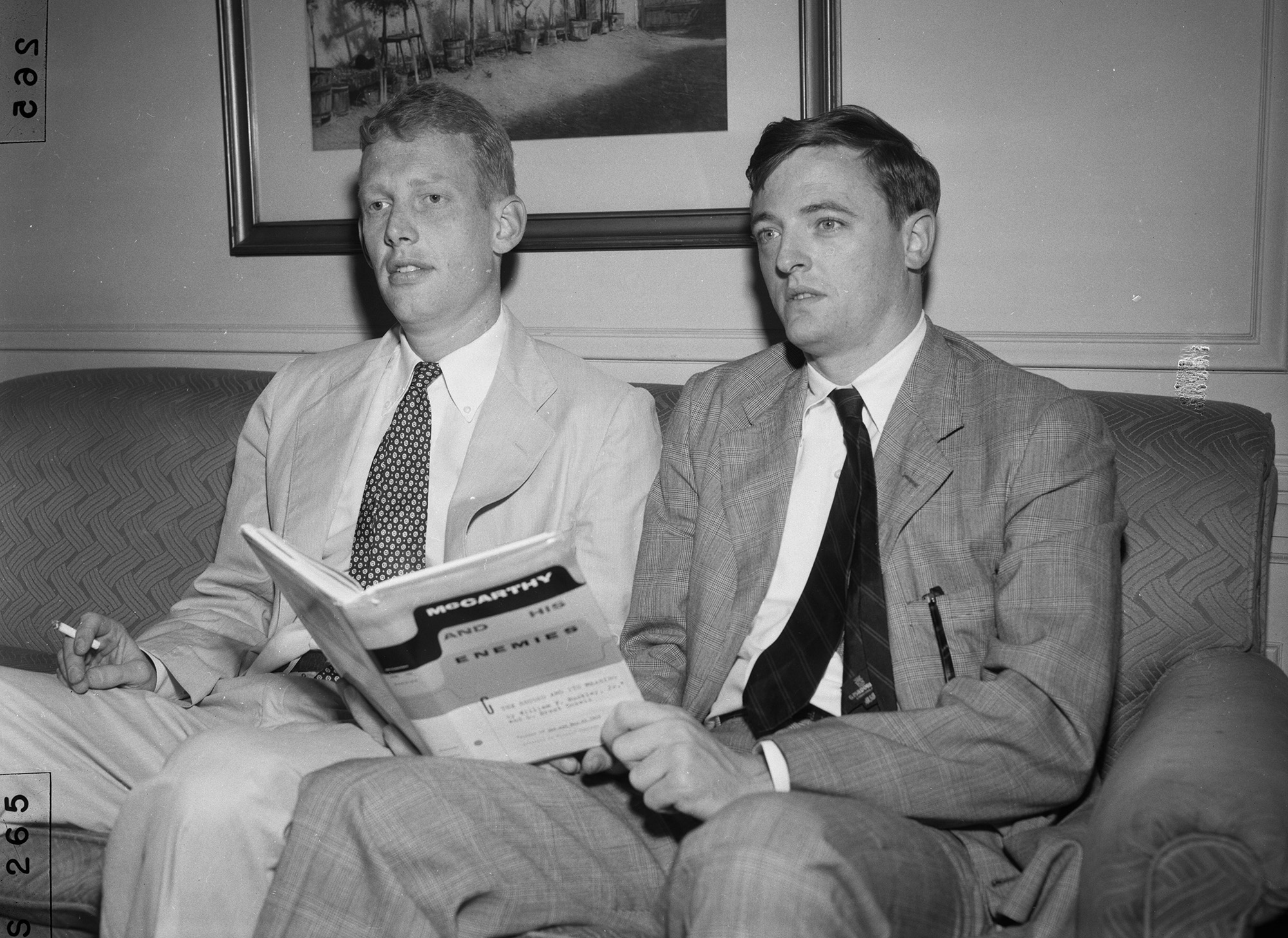 Ever since Donald Trump’s ascension in the GOP, a kind of intellectual treasure hunt has taken place to try and identify the true source of the political right’s embrace of radicalism.

One prominent candidate is the Claremont Institute, where Michael Anton, author of the notorious “Flight 93” essay, essentially kick-started the national conservative movement on behalf of Trump. Other frequently mentioned conservative stalwarts are Samuel Francis, author of the posthumously published Leviathan and Its Enemies who was fired from the Washington Times as a columnist in 1995 for espousing white supremacy, and Robert Welch, the founder of the John Birch Society. Then there is Pat Buchanan, who set the stage for Trump with his own run for the Republican presidential nomination in 1992 on a populist-nationalist platform. And all along, much attention has focused on the significance of William F. Buckley Jr., the founder of National Review, as well as regular contributors to the magazine such as Willmoore Kendall and James Burnham, both of whom left a deep imprint on the modern right.

So far, so good. But with the Supreme Court’s dismantling of Roe v. Wade and its decision to examine the “independent state legislature” theory this fall, it’s time to nominate a fresh candidate — Buckley’s brother-in-law, L. Brent Bozell Jr. Often dismissed as a kook during his lifetime, “Hell Bent” Bozell did more than perhaps anyone to create the blueprint for the militant conservatism now triumphant at the high court and the grassroots.

Even before Roe’s toppling, Bozell, who was the subject of an aptly titled 2014 biography Living on Fire, had recently started to attract fresh scrutiny, mostly because of the indictment of his grandson, L. Brent Bozell IV, by a federal grand jury on seven counts for alleged participation in the Jan. 6 insurrection. L. Brent Bozell III, meanwhile, is the panjandrum of a conservative media empire, founding what’s now called the Media Research Center and the Parents Television and Media Council. 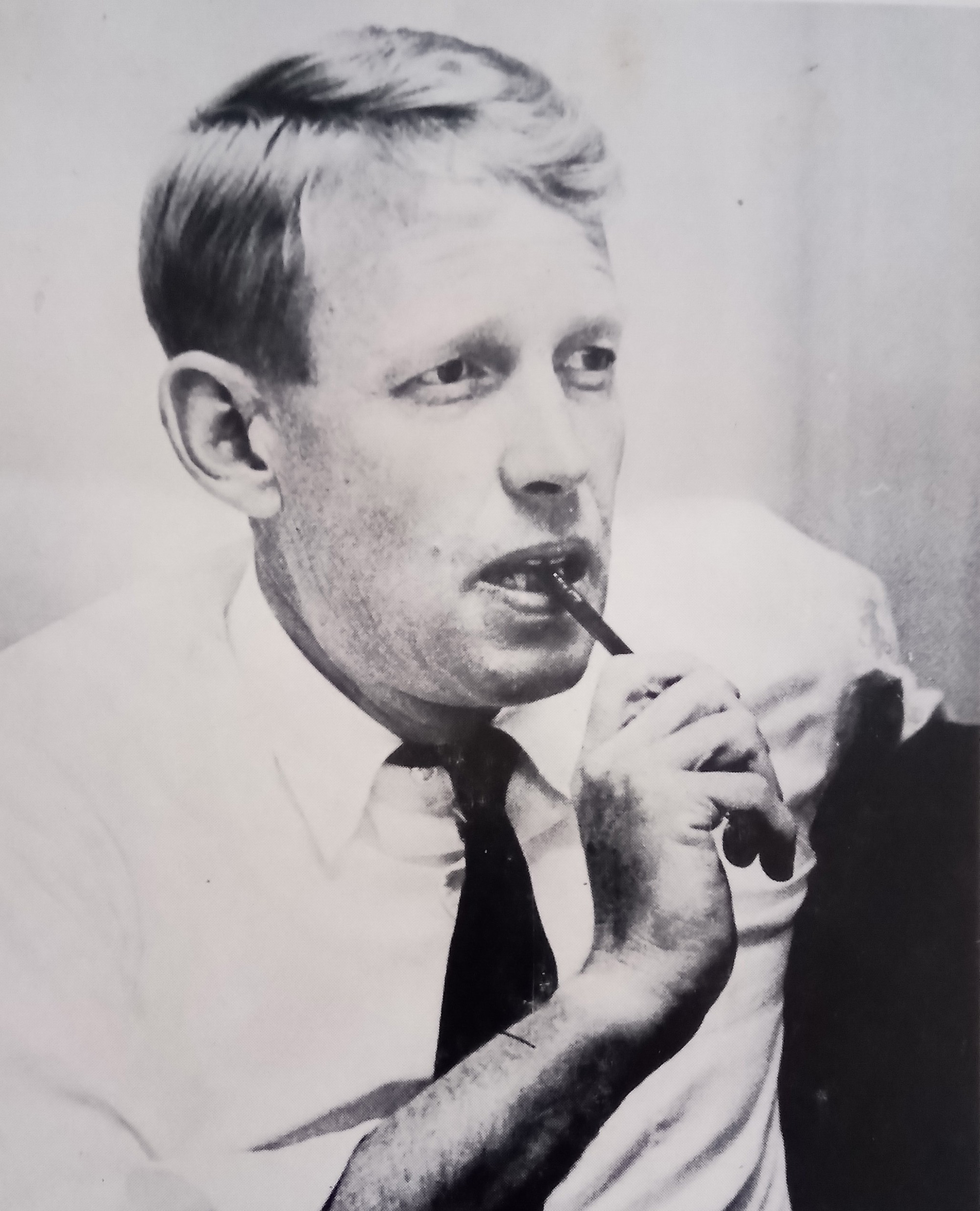 But Jr. was the first theocon. “The liberal republic is coming down,” Bozell announced in 1968. Its tenet of individual freedom represented a “revolt against God.” After the Supreme Court approved Roe in 1973, he decried the “tide of death set loose by the contraceptionalists, the population planners, the war planners, the pornography legitimizers, the sex educationists, the women’s and gay liberators, the genetic manipulators, and of course by the abortionists’ own massive successes in the great population centers.” A tempestuous figure who suffered from alcoholism and manic depression, Bozell ended up playing a key role in fomenting the culture wars and, as Jeet Heer recently noted in the Nation, in fostering the right’s explicit embrace of political violence. 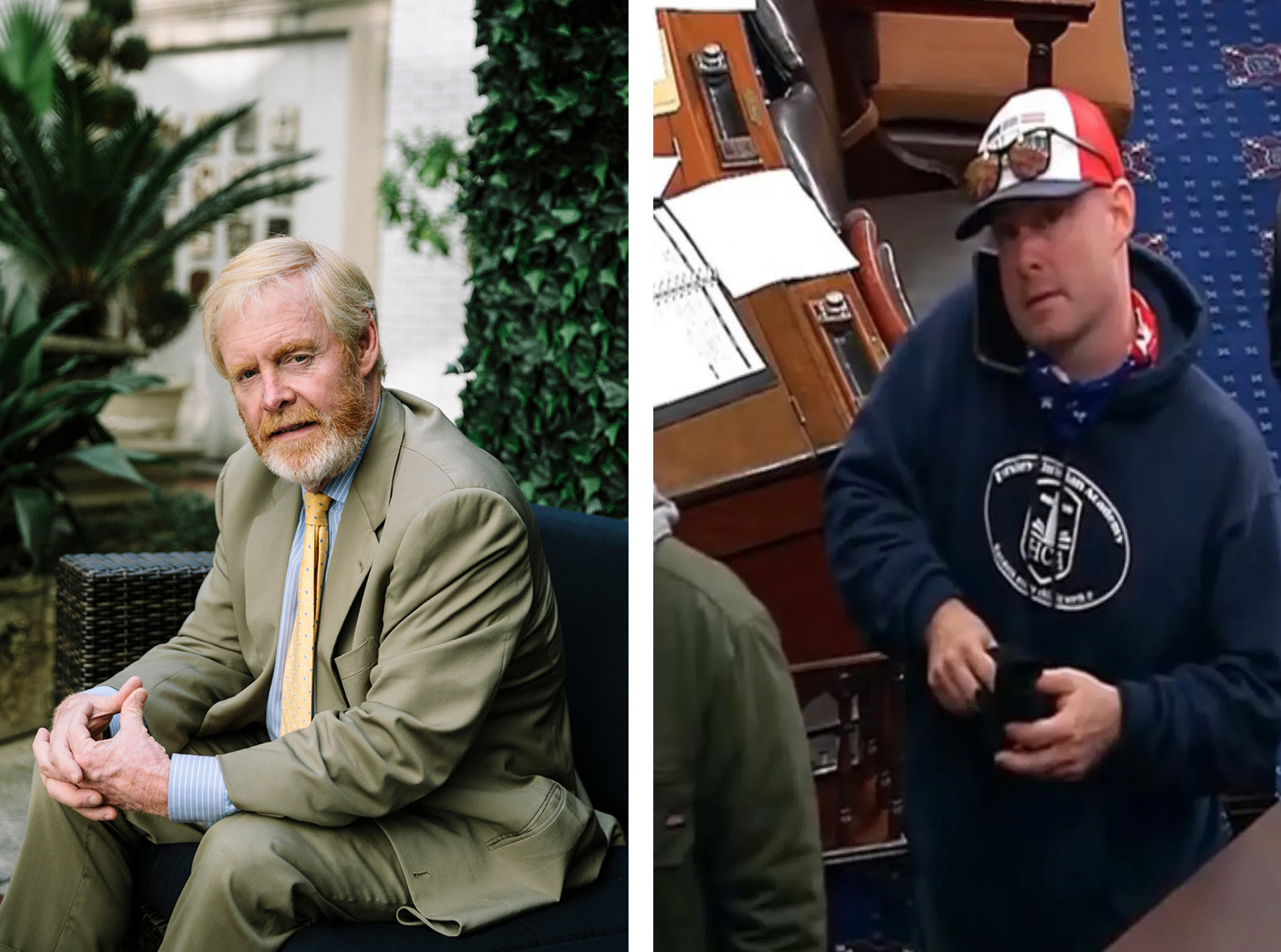 As Geoffrey Kabaservice, a historian of the GOP and a vice president of political studies at the Niskanen Center, told me, “Bozell valorized the theocratic authoritarianism of Spain under Francisco Franco. The radical conservatives on today’s Supreme Court, wittingly or not, have channeled Bozell’s vision and are in the process of overthrowing the rights-based liberal vision of equality that in many ways began with the 1954 Brown v. Board of Education decision.” Sam Tanenhaus, a former editor at the New York Times who is completing a biography of Buckley, agrees: “Bozell knew the route was via the Supreme Court.”

Unlike Buckley, whom he met and befriended in 1946 as an undergraduate at Yale, Bozell was not fed conservatism with his mother’s milk. Born in Omaha, Neb., in 1926, he grew up in an Episcopalian family that voted Democratic. At Yale, he adopted Catholicism and conservatism with the full zeal of a convert. Like Buckley, he was deeply influenced by his Yale mentor Willmoore Kendall, whom Garry Wills once described as an “anti-communist ogre.” Kendall contended that communists should be threatened with deportation from America and that liberals exhibited an “instinctive dislike for the American way of life and for the basic political and social principles presupposed in it.” In October 1948, Bozell joined the Conservative Party of the Yale Political Union and sounded Kendallian notes, decrying bipartisanship in foreign policy and civil rights legislation. In his senior year, he married Buckley’s sister, Patricia, before going on to attend Yale Law School. In 1954, Buckley and Bozell published McCarthy and His Enemies, an impassioned defense of the Wisconsin demagogue that argued that he, and he alone, had the necessary fortitude to root out the internal communist subversion that liberals were too lily-livered to tackle. Buckley and Bozell were careful to note that they were hunting communists, not liberals, but warned, “Some day, the patience of America may at last be exhausted, and we will strike out against the Liberals.” It was only a matter of time, in other words.

Joe McCarthy, for one, was impressed, hiring Bozell as his adviser and speechwriter. So was Arizona GOP Sen. Barry Goldwater, who had Bozell ghostwrite his best-selling The Conscience of a Conservative. Some conscience. In it, Goldwater explained that he was not “impressed by the claim that the Supreme Court’s decision on school integration is the law of the land.”

Bozell and his family had visited Spain in the early 1960s, where he became a fan boy of Franco whose strict adherence to the Catholic creed and readiness to crush dissent struck a chord with him. Bozell became especially enamored of a Catholic monarchist movement known as Carlists and ended up temporarily moving to Spain in 1965. Like the modern-day Catholic political pilgrims on the right who venerate Hungary’s authoritarian Viktor Orbán, he disdained the notion that freedom is essential or even a good thing. In September 1962, in a sophistic essay titled “Freedom or Virtue?” in National Review, Bozell declared that the Founding Fathers divulged “not a word suggesting that freedom is the goal of the commonwealth.” Liberty would serve as a get-out-of-jail-free card for libertinism.

What this Robespierre of the right really hankered for was the freedom to establish authoritarianism. Earlier, in March 1962, Bozell, Goldwater and other conservatives had addressed a raucous anti-communist Madison Square Garden rally held by the fledgling organization Young Americans for Freedom, which Bozell had helped to found. When Goldwater appeared, the audience repeatedly sang “Glory, hallelujah!” Bozell demanded that the Joint Chiefs of Staff invade Havana and that American forces stationed in Berlin immediately “tear down the wall.” But opposing communism abroad was simply a way station to imposing theocratic rule at home, which was why Bozell made sure to lambaste the “inner nature” of liberalism as “nothing but secularized Gnosticism trying to establish a paradise in this world.” Above all, as the New York Times reported, “Mr. Bozell referred repeatedly to the conservative cause as that of the ‘Christian West.’”

In his book, The Warren Court: Reflections on the Consensus Society, which was published in 1966, Bozell laid out the plan for restoring that Christian West by way of defending the Jim Crow South. Again and again, he decried Brown v. Board of Education as a monstrous usurpation of states’ rights, declaring, “a more explicit repudiation of the underlying assumptions of constitutional government can hardly be imagined.” Bozell, you could even say, was the original originalist: His mantra was that the Supreme Court should return to the 18th century conception of the Constitution in which the legislature prescribes the rules while the judiciary deferentially voices its views without proposing any course of action. The practical import of Bozell’s constitutional legerdemain would have been to eviscerate federal power and transform America back into a confederation of states. He concluded by asking “what weapons are available for the Counter-Revolution.” 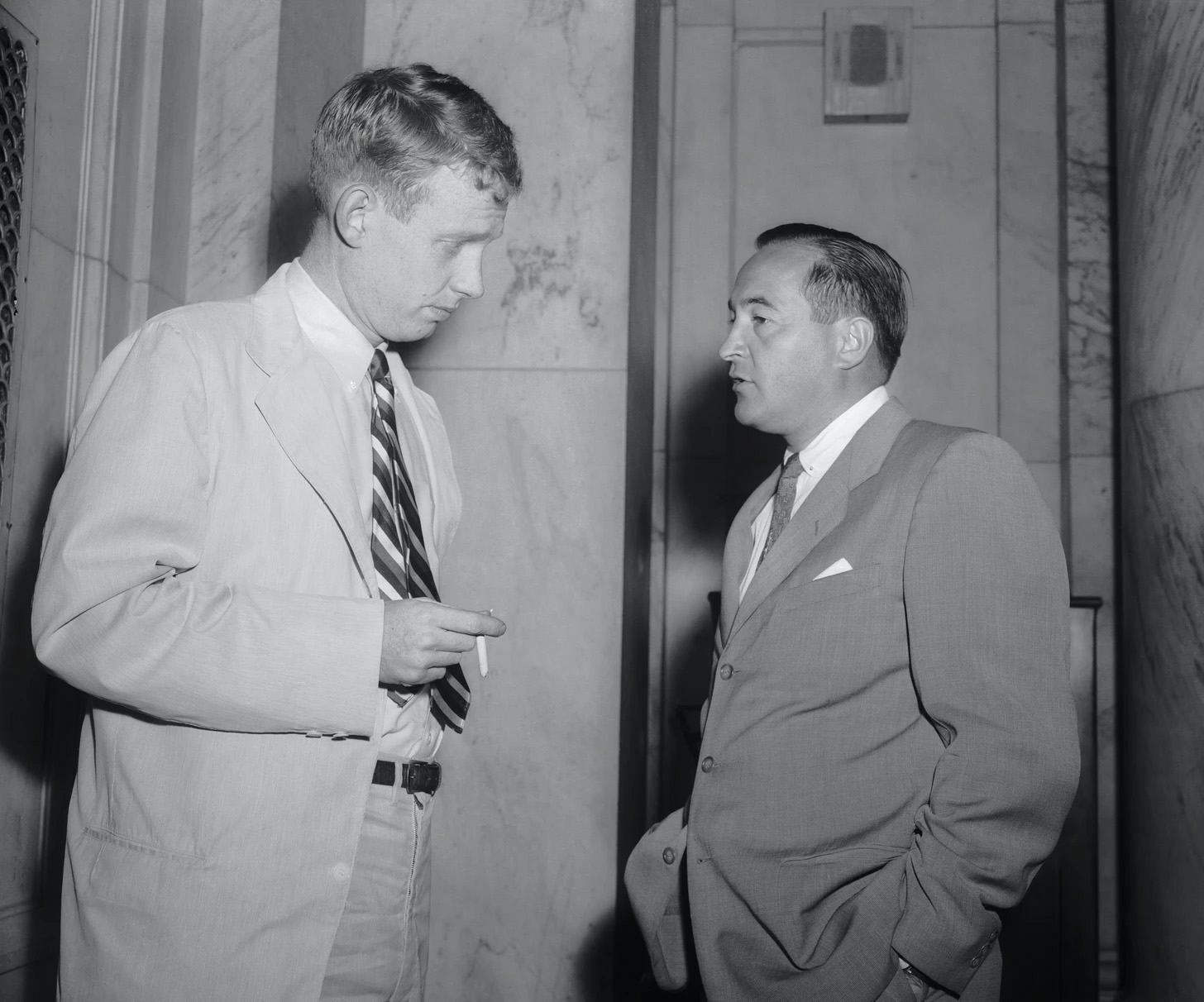 Bluff and bombast? Not a chance. In 1965 Bozell castigated his brother-in-law and erstwhile ally Buckley, whose celebrity he resented, for his decision to excommunicate the John Birch Society from the conservative movement. After Buckley declined to publish Bozell’s letter protesting the decision, Bozell insisted that his name be removed from the masthead of National Review. More was to come. In June 1970, Bozell organized the first violent anti-abortion protest, leading a Spanish Carlist faction calling itself the Sons of Thunder to a George Washington University Student Clinic. Bozell was later convicted on several counts, including assaulting a police officer with a 5-foot wooden cross. Buckley and others on the right felt that this episode of onward Christian soldiers was uncomfortably reminiscent of the tactics of the civil rights and anti-Vietnam War protesters.

Bozell was undaunted. In an Oct. 14, 1970 op-ed in the New York Times titled “Encouraging Murder,” he once more came out swinging: “It is a Republican regime which now spearheads these policies; but in responsibility there is no useful distinction between Republicans and Democrats, conservatives and liberals. The cure, if there is one, will come from a militant constituency preeminently concerned with the sanctity of human life. In this militancy Christians will play their role.”

By the time he died in April 1997, however, Bozell was largely forgotten. It was Buckley who enjoyed the fruits of victory when Ronald Reagan was elected president in 1980. But in the long run, a different philosophy has won out. Writing in the August 2021 issue of First Things, for example, Ross Douthat complacently observed that Bozell’s heirs “prefer illiberal nationalism to liberal internationalism, and they believe that the nationalist-populist uprisings provide an opening for a Catholic insurgency within the West’s elite.” Bozell, whose credo was “Yes, we are patriots; but we are Christians first,” appears to be the true godfather of a revanchist right.