In all, roughly four in ten Americans say they are having difficulty paying their bills — a nearly 50 percent increase since last spring, according to a Lever review of data from the US Census Bureau’s Household Pulse Survey. 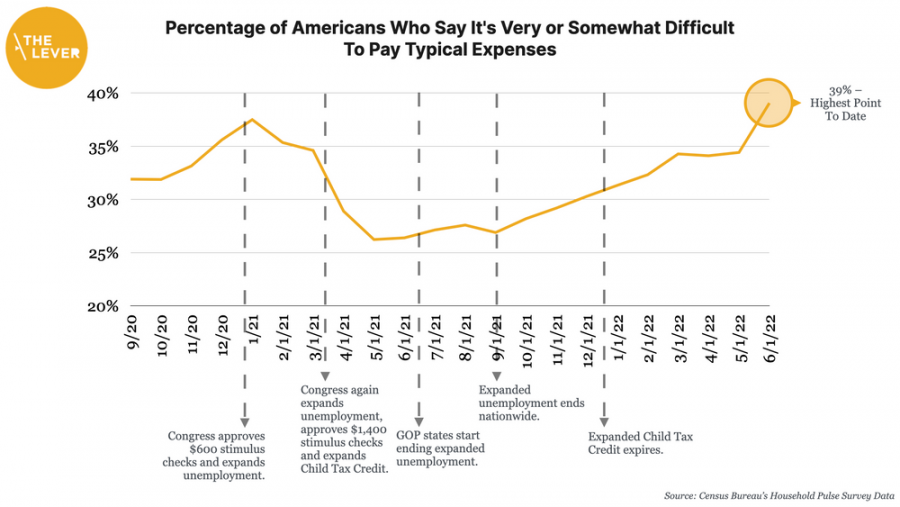 As the suffering has increased, Washington policymakers, Beltway economists, and corporate media personalities have started pressing an austerity agenda, demanding even more pain in the name of taming inflation — even though data suggest inflation is largely being driven by corporate profiteering and supply chain blockages rather than wages or consumer spending.

Indeed, the number of Americans experiencing financial difficulties dropped substantially in the first half of 2021, thanks to pandemic relief measures that added $300-weekly federal unemployment benefits, sent out two stimulus checks totaling $2,000, and expanded the child tax credit to provide most American parents with payments of $250 or $300 per month per kid.

Benefits Were Cut Off

While the federal pandemic aid has ended, inflation has drastically increased. As a result, since last April, there has been a staggering 49 percent increase in the number of Americans reporting that it’s very or somewhat difficult to pay typical household expenses.

Matters appear to be getting substantially worse now — and rapidly. The percentage of Americans reporting financial stress jumped more than 13 percent between May and June. This figure is the highest it’s been since the Census Bureau started asking this question in August 2020.

The overall increase in financial hardship can be clearly traced to the end of pandemic aid programs. Most Republican-led states moved to cut off the federal unemployment benefits last spring, and Congress allowed the expanded unemployment programs to expire last September.

To make matters worse, inflation has accelerated since the federal aid was cut off, and Americans are having to contend with record price increases in their daily lives.

The federal government’s response to inflation has been to raise interest rates — a move that will likely put downward pressure on wages, cause job losses, reduce worker bargaining power, and exacerbate the housing crisis.

Financial hardship could continue to climb even further thanks to congressional inaction: Americans on individual health insurance plans will see their premiums spike next year if Democrats fail to extend the subsidies they passed last year. Without an extension, people on these plans will receive notices about new premium increases in October, just before the November midterm elections.

When the Biden administration formally ends the public health emergency the federal government declared at the start of the COVID pandemic — a move that could come as early as October — up to fourteen million Americans could lose their Medicaid coverage, since states will be incentivized to start throwing millions of Americans off of their Medicaid rolls.

Last week, a Bloomberg News house editorial — which typically expresses the views of its billionaire owner, former New York mayor Mike Bloomberg — called on the federal government to set a firm date to end the public health emergency and limit funding so that states start trimming their Medicaid rosters.

“Lawmakers can rarely resist too much of a good thing,” said the editorial. “But with the COVID crisis ebbing, the country needs to start getting back to normal. Ending these emergency programs — while easing the transition — is the right thing to do.”

You can subscribe to David Sirota’s investigative journalism project, the Lever, here.