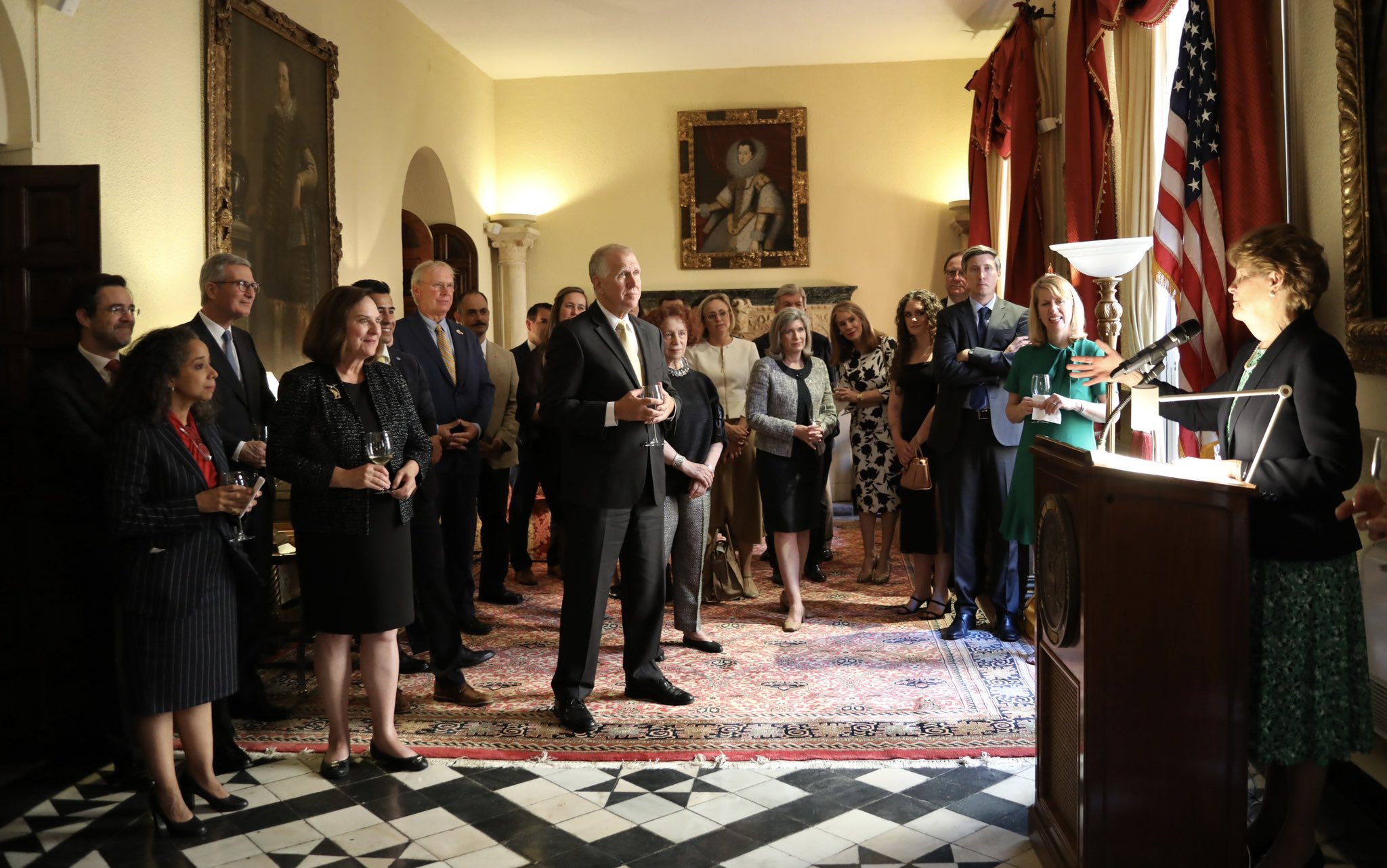 MADRID — Thom Tillis and Chris Murphy’s work on a once-in-a-generation gun safety bill began thousands of miles away from the Capitol, in the Western Balkans.

The North Carolina Republican and the Connecticut Democrat barely knew each other at the time and had no predetermined reason to link up, especially on an issue as vexing as gun violence. They don’t sit on the same Senate committees. They’re from different regions. And less than two years ago, Murphy was even fundraising on behalf of Tillis’ Democratic opponent.

Their swing through Serbia, Bosnia-Herzegovina and Kosovo in April changed all of that.

Known as a congressional delegation and abbreviated in Hill-speak to CODEL, the trip took Tillis and Murphy away from the Capitol’s often vicious partisan culture and built them a relationship that proved, as the Republican explained, pivotal to the gun deal.

On CODELs, “we’re working 12- and 14-hour days, we’re sometimes traveling two or three hours from country to country,” Tillis said in an interview from Spain’s capital, the site of another overseas delegation to this year’s NATO summit. “And that just gets you into a position where … you build that trust and you build that familiarity, [and] that serves as a basis for getting accomplished what we did.”

Many facets of official Washington can look impenetrably bureaucratic to the voters who send lawmakers there, and in some ways CODELs are no exception. But there’s a reason the trips are referred to as a “secret weapon” in a gridlocked capital: For more than a half-century, visits intended to reassure allies about goings-on in the U.S. have also helped members of Congress foster rare human connections that can shape future policy — even on issues unrelated to foreign affairs.

On paper, CODELs allow lawmakers to travel abroad to meet with world leaders, diplomats and advocates on any number of national security topics. But in practice, lawmakers who join them spend tenfold the amount of time together than they do on the Hill each week while running between committees, staff meetings and votes. The rigid, often scripted nature of their typical day-to-day essentially disappears, allowing CODELs to function as a counterweight to domestic polarization.

Sen. Jeanne Shaheen (D-N.H.), a fixture of the modern CODEL, and Tillis organized last week’s eight-member trip to the NATO summit, which included stops in Finland and Sweden. In Madrid, Shaheen was swarmed by foreign journalists who recognized her due to her extensive international travels.

“We get to know each other in ways that we don’t often have time to do when we’re actually in the Senate and learn to trust each other,” Shaheen said in an interview on the sidelines of the hubbub. “Which is really important when you’re dealing with all issues, really.”

For Tillis and Murphy, a CODEL paved the way for their roles as two of the four negotiators shaping bipartisan gun safety legislation. In some ways, though, their willingness to entertain the type of give-and-take negotiation Washington once ran on was a prerequisite for even joining the international trip.

That’s because the Senate’s more partisan members on both sides of the aisle rarely join CODELs, especially those trying to profess ideological purity to their political base. Participating in a delegation essentially asks senators to lose their Democratic or GOP labels — albeit temporarily — and function as de facto diplomats.

“At a time when fewer and fewer members spend time together during the week, and none on the weekends, this is really the best opportunity for time away from Washington and time in places around the world,” said Sen. Chris Coons (D-Del.), another CODEL veteran who traveled to Madrid. There, he added, “what unites us as Americans is more important than what divides us as partisans.”

Lawmakers rarely bring reporters along, in part due to concerns about security and resources. POLITICO joined last week’s NATO summit CODEL to compare, firsthand, the lore of lawmaker travel with the reality.

A legacy from Acheson to McCain

CODELs began in the 1940s, when future Secretary of State Dean Acheson first established the department’s legislative affairs office. He aimed to use lawmakers to bolster the Truman administration’s diplomatic efforts, especially on issues that require buy-in from Congress.

“You have a co-equal branch of government doing diplomacy overseas, which is incredibly important, especially when you’re looking to reinforce a message,” said Naz Durakoglu, the assistant secretary of State for legislative affairs and a former foreign policy adviser to Shaheen.

The CODEL to Spain’s capital spoke with one voice to allied nations about the near-unanimous Senate support for admitting Sweden and Finland into NATO. In the coming weeks, the chamber is expected to vote on a defense treaty that would put the U.S. government’s rubber stamp on both countries’ entry into the storied Western military alliance. (Formal ratification requires approval from all 30 member-nations.)

The Shaheen-Tillis-led trip also featured a one-hour meeting with President Joe Biden, who attended the summit here. Biden, a former Senate Foreign Relations Committee chair, is himself an experienced CODEL-traveler who’s credited the trips for fostering his decadeslong friendship with the late Sen. John McCain (R-Ariz.).

It started like this: Early in Biden’s Senate tenure, McCain served as the chamber’s Navy liaison, a role that allowed him to join CODELs overseas. In a 2017 speech, McCain joked that he often had to carry senators’ luggage, and “once or twice that turned out to be the young senator from Delaware.”

“I’ve resented it ever since,” McCain quipped.

Mark Salter, McCain’s longtime chief of staff and confidant, has said the experience helped shape the senator’s future. The getaways were “incubators for friendships across generations and party lines” beyond any CODEL’s formal goals, Salter observed in 2020’s “The Luckiest Man: Life With John McCain.”

A more recent case of CODEL-driven alliance is Sen. Joni Ernst (R-Iowa) and Senate Majority Whip Dick Durbin (D-Ill.), who both traveled to Madrid. Ernst, an Army veteran and rising GOP star, has teamed up with Durbin on issues ranging from Ukraine aid to reauthorizing the Violence Against Women Act.

The Iowa conservative has also found a partner in Shaheen on advancing the rights of women and girls in Afghanistan after its government fell to the Taliban.

In his memoir based on decades with McCain, Salter described the late senator as deeply aware of CODELs’ power to help senators dip their toes in executive branch waters.

He “saw that diplomacy and the conduct of foreign policy weren’t the exclusive preserve of presidents and secretaries of state,” Salter wrote. “Senators, too, could acquire the influence of world statesmen.” 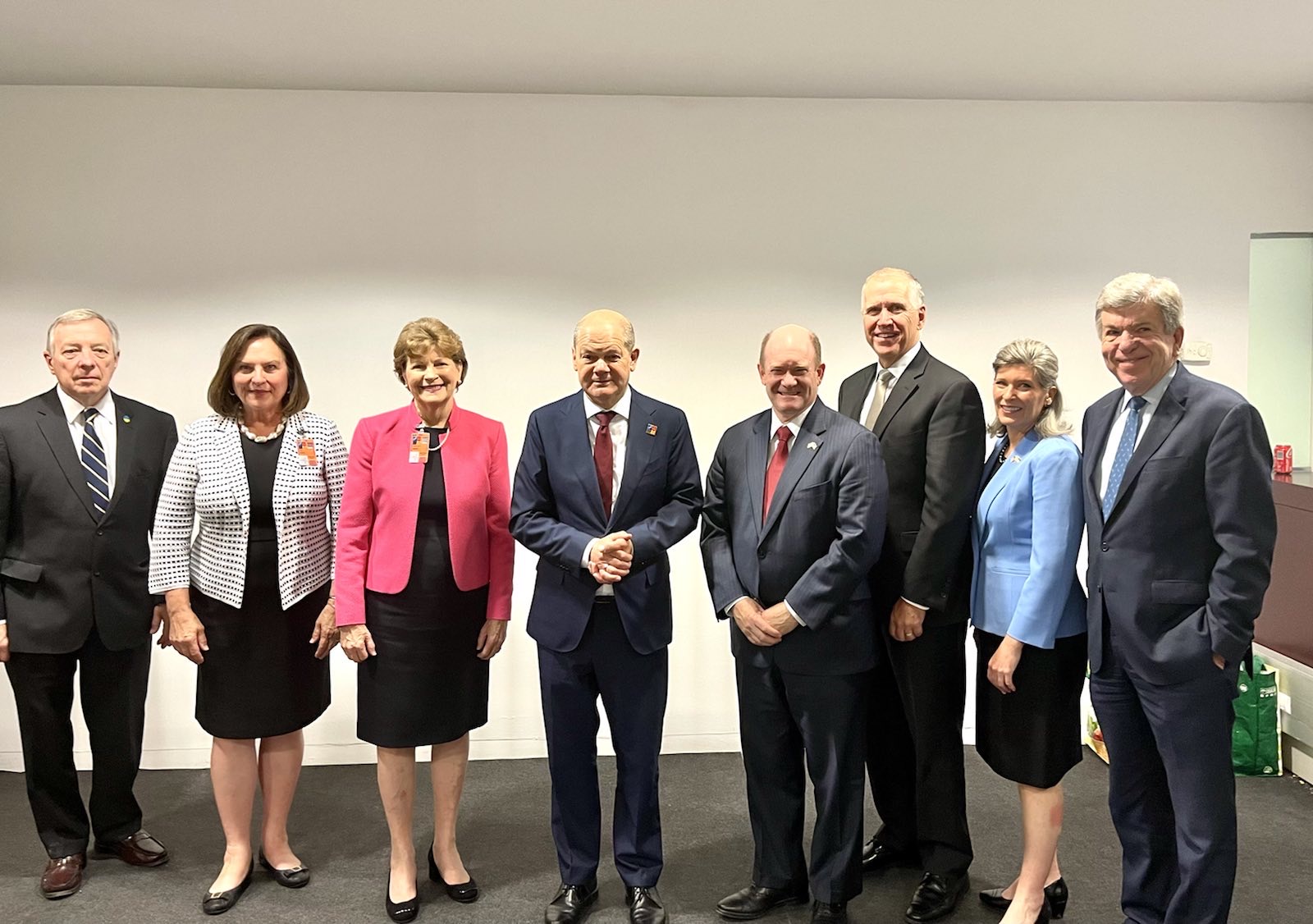 After meeting their own president, GOP senators in the delegation actually praised Biden for helping the summit succeed — yet another break from their stateside posture.

“Here, we have a bipartisan delegation and a president who have a common goal,” Tillis said. “Back home, maybe not quite as much.”

Sen. Deb Fischer (R-Neb.), who attended that meeting, complimented Biden for spending time with the group but said she wished it would happen more often stateside.

“When he left, he said he would like to meet with us again. I personally welcome that. I think it’s important to meet with a diverse group of senators,” Fischer said. “It would only be helpful for the president if he would reach out to us in our country as well as here.”

Not always sunny in CODEL land

While the Balkans trip helped get gun legislation over the finish line, Tillis and Durbin appeared to have productive conversations during the NATO summit about the third-rail topic of immigration reform.

Durbin said in an interview in Madrid that he and Tillis have decided to restart their immigration talks, which had previously included Sens. John Cornyn (R-Texas) and Alex Padilla (D-Calif.). His comments followed last month’s deaths of more than 50 migrants in a Texas trailer.

“Thom and I sat and talked over and over again and will some more, I’m sure,” Durbin said. “Each of those conversations is probably a factor of two or three in what would be the normal contact we have. Just time without political pressure, time in a personal nature, really builds relationships.”

Lawmakers say they try hard on CODELs to not discuss issues that divide them — and there are many — particularly when they’re seeking to showcase congressional unity to foreign counterparts. For that reason, Coons said, the senators didn’t speak to one another in Madrid about the Supreme Court’s ruling last month that reversed Roe v. Wade.

Yet CODELs can also spark the occasional domestic division.

A group of GOP senators that included more staunch conservatives, such as Wisconsin’s Ron Johnson and Louisiana’s John Kennedy, visited Russia over the July Fourth holiday in 2018. There, they met with Foreign Minister Sergey Lavrov in a stated effort to ease tensions after U.S. intelligence agencies concluded that Moscow meddled in the 2016 election — and to this day, their trip sparks condemnation from the left.

Russia never changed its behavior and is now waging a brutal war against Ukraine.