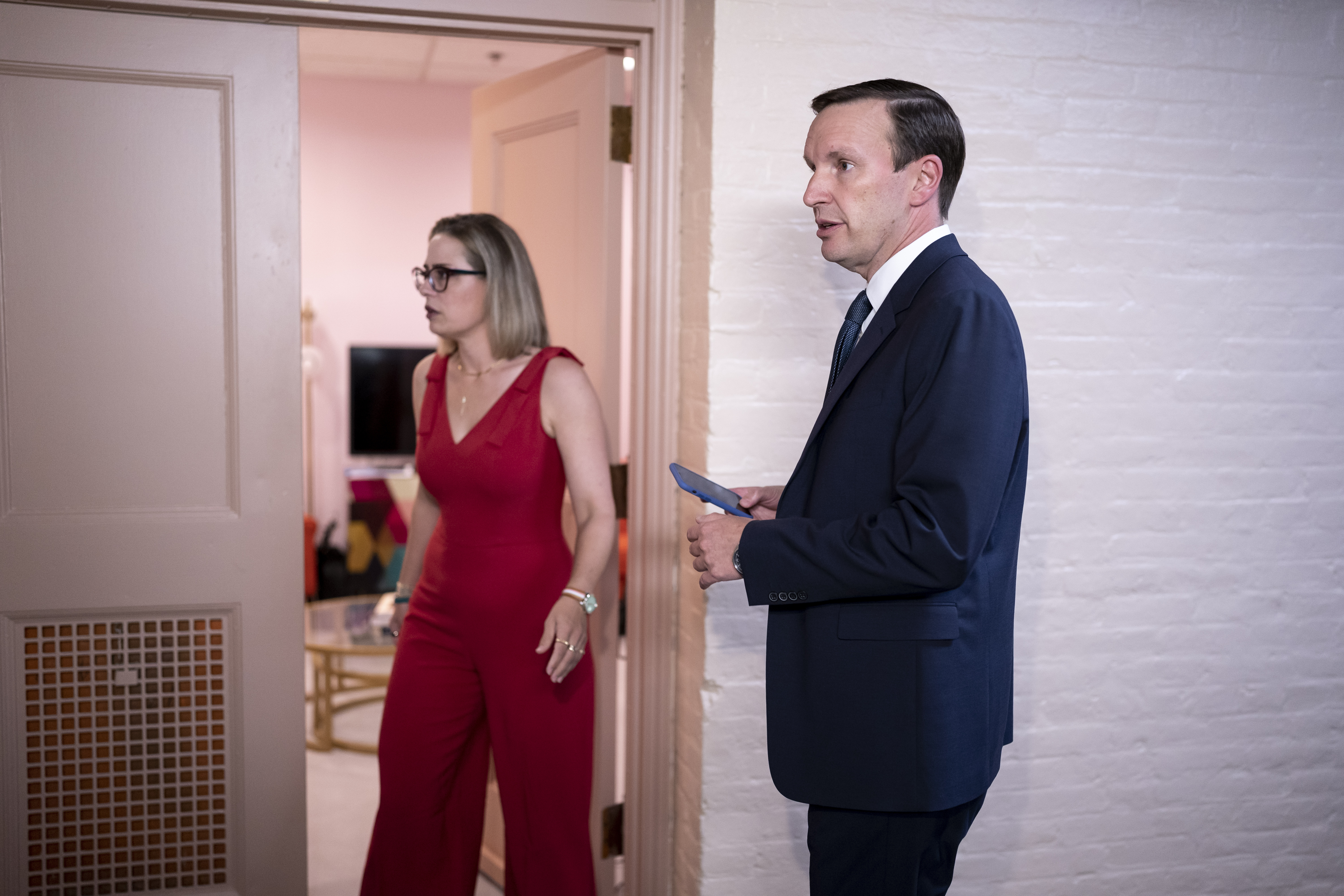 In a Washington run by Baby Boomers and octogenarians, it took two 40-something Democrats with a yin-and-yang approach to get a gun safety deal done.

Chris Murphy had developed self-described “pessimism” in his decadelong quest to rein in gun violence. That’s where Kyrsten Sinema came in, pushing her more liberal friend along.

Their partnership proved exactly what Democrats needed to break through on gun safety after nearly 30 years of attempts. They’re close enough for the triathlete Sinema to give Murphy fitness advice. But the Connecticut progressive also credited the Arizona centrist with maintaining “optimism” that he sometimes struggled to muster.

“I’ve tried every tactic in the book to get this body to act and I’ve never been successful. And so I have a bit of PTSD about negotiations. Kyrsten just was convinced from the very start that this was possible,” Murphy said in an interview on Thursday. “We needed that.”

The Senate’s Thursday night passage of its bipartisan gun safety bill marked a seminal moment for a Democratic Party that pushed through background check mandates in 1993’s Brady Bill but has struggled ever since to reassemble that coalition. Behind this year’s effort is a duo who reflects their party’s ascendant Generation X as well as the future of the caucus: a coalition of stalwart liberals and Sun Belt moderates.

Neither Sinema nor Murphy chair committees or hold formal leadership roles in the Democratic caucus, yet the two senators cut a deal with GOP Sens. John Cornyn of Texas and Thom Tillis of North Carolina that will go down in the party’s annals. The legislation would strengthen background checks on young people, deliver billions of dollars for mental health and close a domestic violence loophole for gun buys — a response to a gunman killing 19 children and two adults last month in Uvalde, Texas.

The Democratic pair did it in their own unique styles. Murphy is a loquacious Northeasterner squarely in the party’s left flank. He became a senator in the days after 2012’s devastating school shooting in Newtown, Conn., forming partnerships with gun safety groups that gave him credibility with them at critical moments over the past month.

Sinema is a head-down moderate who’s taken unceasing criticism from the left for defending the filibuster while cutting bipartisan deals on infrastructure and now gun safety. Her close relationships with Republicans are crucial to that success, giving her intuition for where the GOP might land and helping her serve as a go-between for Murphy and Cornyn.

Sinema described her negotiating style succinctly in an interview: “I am unwilling to accept defeat.”

In an interview, Senate Majority Leader Chuck Schumer said the deal “only would have happened … with a Democratic majority,” citing past Republican reluctance to put gun legislation on the floor. And he gave Sinema and Murphy plenty of room to maneuver.

It helped that they share a track record of working with their Republican counterparts. Sinema partnered with Cornyn on the border and Murphy teamed up with the Texas Republican to improve the guns background check system. While Murphy and Cornyn failed to reach a broader gun deal last year, Murphy suggested those negotiations formed the basis of this year’s agreement.

Even so, Murphy faced doubters. Fred Guttenberg, a gun safety activist who lost his daughter during the 2018 school shooting in Parkland, Fla., told Murphy last year to cut off talks with Cornyn and move forward with a floor vote — but the senator pushed back.

“I basically thought Cornyn was a waste of time and you couldn’t trust him. And Murphy considered John Cornyn a friend,” Guttenberg said. “His investment in that relationship, in hindsight, was the right thing to do because it set the table for what happened this week.

The talks over the last month weren’t always pretty. Cornyn told reporters repeatedly that it was time for negotiators to wrap things up to no avail. After some tough meetings, Sinema reached out individually to Cornyn to reiterate that a deal was still possible.

“The only thing I wish is that they would have been a little easier to get to a yes,” Cornyn said of the Democrats.

Sinema’s ability to be an ideological brake on the Democratic Party proved pivotal in getting GOP buy-in on a sensitive topic like firearm access. Even on Thursday afternoon, as negotiators tried to move to a final vote, she shuttled between Democrats and Republicans to send the bill more quickly to the House.

Democrats “deserve some credit here for being willing to accept less than what they’ve insisted on in the past,” said Senate Minority Leader Mitch McConnell. He spoke to Sinema throughout and called her “remarkably effective. As she almost always is on legislation that actually has a chance of becoming law.”

“I think Sinema has very real constraints on what she’s willing to vote for. So it’s natural that she would be the one who limits the attempts from Democrats who try to do more,” said Sen. Tammy Duckworth (D-Ill.).

Rep. Ruben Gallego (D-Ariz.), who’s threatened to run against Sinema in 2024, responded to her expression of grief over the Uvalde shooting by comparing her statements to a now oft-mocked phrase previously used by many GOP lawmakers after mass killings. He tweeted at her that “unless you are willing to break the filibuster to actually pass sensible gun control measures you might as well just say ‘thoughts and prayers.’”

Sinema doesn’t directly respond to those jabs. But she feels justified in her resistance to weakening the filibuster. Notably, she pushed successfully for language in the gun bill that would close a loophole allowing some domestic abusers to still purchase firearms, a long-elusive Democratic goal.

“I am continually proud of my approach. We are passing the most holistic solution to gun violence in our country in 30 years,” she said.

It’s rare for Sinema to talk to the press at all. When a particularly fraught meeting broke up last week, Sinema patted Murphy on the back before leaving him to update reporters — the private and the public players in their typical modes.

Murphy was also the primary conduit to Schumer, who agreed not to force a political vote before Murphy had time to work with Republicans. The Nutmegger observed: “I talked to Chuck Schumer more in the last four weeks than I probably have cumulatively for the last four years.”

Schumer recalled “several times” that the deal seemed close to falling apart. At one point, Schumer said he gave Murphy a “little bit of a pep talk” amid doubts about the outcome.

Murphy and Sinema got plenty of outside pressure to take a different tack. So Murphy offered a practical view of the talks to gun safety groups and helped convince them that some progress was preferable to another failed vote.

They also took his strategic advice.

“Every once in a while, candidly, I would put out a message via tweet that would be really aggressive,” Guttenberg said. Murphy “would nicely let me know to just please not do that.”

Murphy’s made clear that he’ll continue to push for more gun safety measures and campaign against those who oppose the new legislation, which is set to pass the House as soon as Friday. Yet after giving the same gun violence speech for the past decade, he’s feeling slightly more at ease.

“I’ve lived the last 10 years in fear that I wouldn’t be able to do something that all of these people in this movement felt honored their” dead loved ones, Murphy said. “I feel so indebted to everybody who’s been a part of this process. Because I think we’ve relieved just a little bit of pain and anxiety for a lot of survivors and a lot of parents.”