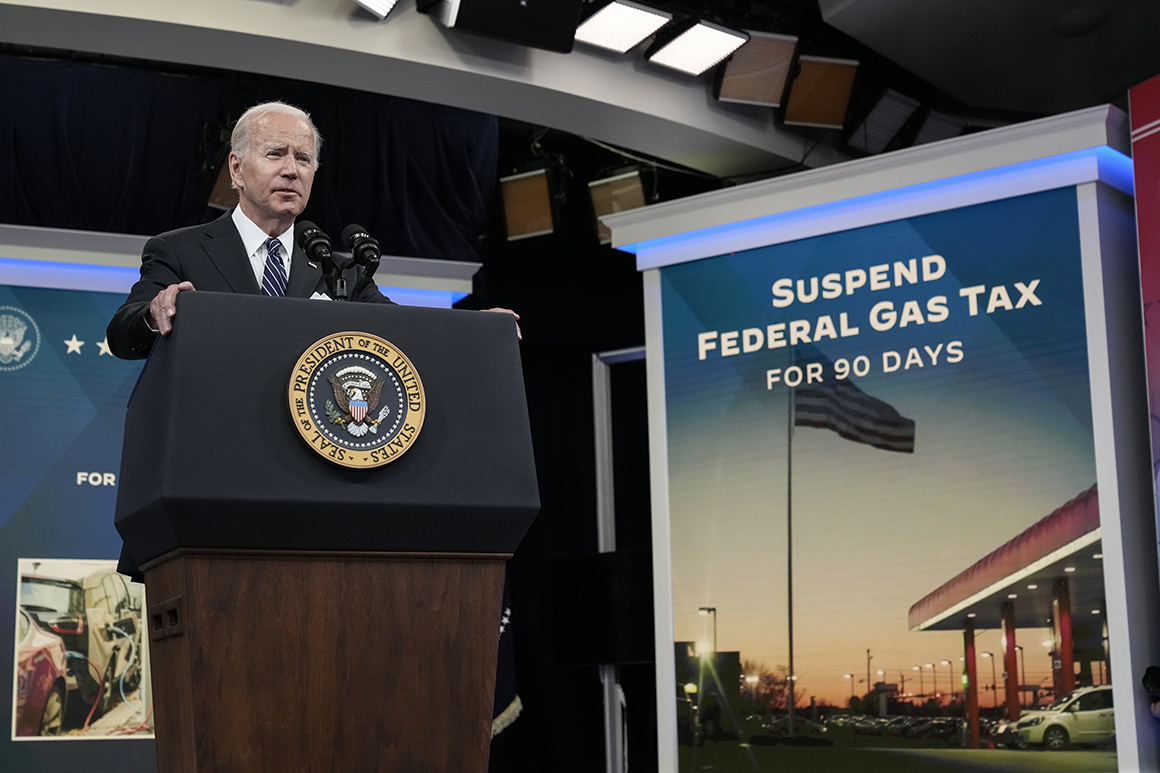 But what would it actually do?

The hard realities: Even if Congress was in a mood to cooperate with Biden’s plan, most studies show that only a small portion of the savings from halting the tax would make its way to consumers. Meanwhile, the tax pause would take money away from Biden’s signature infrastructure law — and it probably wouldn’t offer his party much help with voters in November. It does, however, give Biden some cover to appear as if he’s at least trying to tackle an issue that’s hitting Americans in the pocketbook.

Here are some details you need to know about Biden’s proposal, which is unlikely to become reality:

What exactly has Biden proposed?

The White House wants Congress to suspend the 18.4 cents per gallon federal gasoline tax and 24.4 cents per gallon federal diesel tax for the next three months, “to provide direct relief to American consumers who have been hit with Putin’s Price Hike.” Biden also asked states to either halt their own fuel taxes or find other ways to help consumers. For example, California has considered $400 direct payments to vehicle owners. Chicago has been sending drivers $150 gas cards and $50 transit vouchers.

What are the chances of a gas tax holiday happening?

Congress creates the laws that raise — and spend — money. But the lawmakers that Biden would need to enact his proposed pause in gasoline tax collections are lukewarm at best. A handful of Democrats are on record as supporting the idea, but many of them dislike Biden’s proposal — because it doesn’t go far enough.

Critics of a tax holiday include House Speaker Nancy Pelosi and Senate Majority Leader Chuck Schumer, who have said a pause would bring only meager savings for consumers but could enrich oil companies that are already earning record profits. Instead, they prefer legislation that would penalize price gouging by oil companies (who deny gouging).

Would the tax holiday save me money?

Probably not as much as you think.

If the 18.4 cents-per-gallon tax were paused as Biden has asked, consumers would save about $3 on the $75 it costs to fill up a standard sedan or crossover, assuming 15 gallons purchased at $4.98 a gallon.

And motorists may not even see that much. One reason Democratic leaders have opposed a gas tax holiday is skepticism that oil companies would pass along the savings at the pump, as opposed to just pocketing the extra money.

The University of Pennsylvania’s Wharton School examined the impacts in the states that have paused their gas taxes in the last few months and found that in Maryland, 72 percent of tax savings were passed onto consumers, compared with 58 percent to 65 percent in Georgia and 71 percent to 87 percent in Connecticut. Still, the Wharton researchers found that “these price reductions were often not sustained during the entire holiday.”

And the dollar amount Wharton put on the savings from a potential gas tax holiday at the federal level was meager. In March, they found that suspending the federal gas tax through December would save the average person between $16 and $47 on gas while lowering federal tax revenue by about $20 billion.

Drivers would easily forget the small savings in the gas tax amid daily fluctuations in fuel prices, which can “drop or surge by 10 to 20 cents a gallon in a single [trading] session,” said Tom Kloza, global head of energy analysis at the Oil Price Information Service. It could even backfire: “The problem with an 18 cents a gallon gas tax holiday is that it juices up demand when the supply-and-demand balance is already tilted toward tight supply.”

Kloza suggested that limiting U.S. fuel exports — thus keeping more of the gasoline supply at home — could be a more effective way of reining in domestic prices.

How would the tax vacation affect federal infrastructure spending?

In short, the government would have less money for projects such as highways, transit, bridges and related programs involving the environment and racial equity — including Biden’s prized $1 trillion-plus infrastructure law.

The federal government deposits taxes on gasoline and diesel fuel into the Highway Trust Fund, which it uses to pay for infrastructure projects across the country. According to the Congressional Budget Office, tax revenues into the fund in the current fiscal year should amount to about $44 billion, assuming the status quo.

The White House estimates that the proposed 90-day holiday could cost as much as $10 billion but said it should have “no negative effect on the Highway Trust Fund.” Biden called on Congress to use “other revenues” to make up for the shortfall, “consistent with legislation proposed in the Senate and the House to advance a responsible gas tax holiday.” 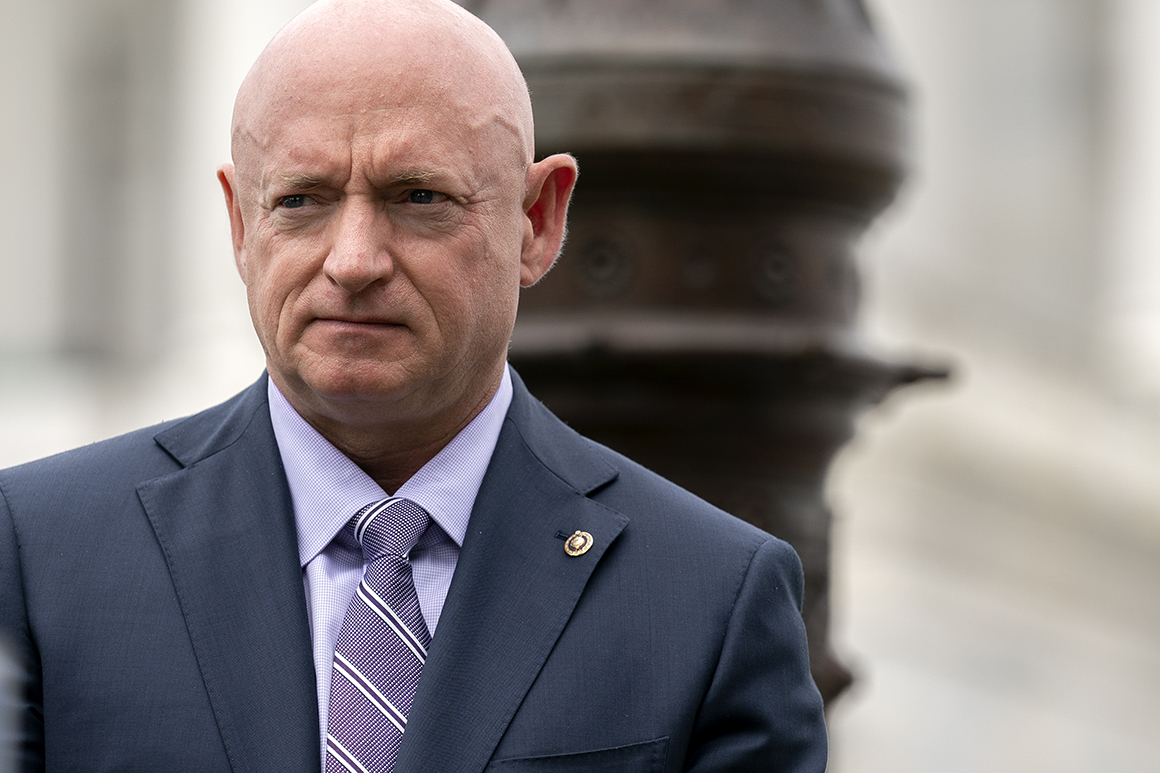 Some industry groups that support transportation spending, especially those that depend on federal contracts, said the holiday would undermine Biden’s signature infrastructure law.

Portland Cement CEO Michael Ireland said a gas tax holiday would “strangle” the law “before it is even up and running.” Stephen Sandherr, CEO of Associated General Contractors of America, called it a “desperate” and “irresponsible” ploy that “won’t provide relief at the pump” but “would leave a massive hole in the federal Highway Trust Fund.”

Construction industry officials also waved off any potential benefit to suspending the diesel tax, although the price of diesel fuel has gone up by more than 40 percent in the past year and is a significant driver of rising construction costs. They say the damage to the Highway Trust Fund far outweighs any potential short-term benefit of saving 4 percent on a gallon of diesel, or likely far less, depending how much of the savings the oil companies pass along.

The infrastructure law also depended on a $118 billion transfer from the Treasury to avoid the need for Congress to come up with a source of new revenues. But Dave Bauer, CEO of the American Road and Transportation Builders Association, noted that “the single biggest pay-for for the infrastructure bill was the gas tax,” which contributed hundreds of billions of dollars to the bill.

Without the gas tax, Bauer said, it would have been difficult for Congress to pass the bill.

“If you don’t count that foundational contribution from the existing user fees, I mean, how much harder would that have been?” he said. “Without that existing revenue foundation, they would have needed $200-250 billion more over the next five years.”

Would Democrats even benefit?

The call for a pause on gas taxes started with a handful of Democrats, including Kelly and Maggie Hassan (D-N.H.) in the Senate and O’Halleran and Kim Schrier (D-Wash.) in the House, who were searching for an issue that would boost their campaigns in tight races. But Pelosi and Schumer immediately quashed it.

Biden’s proposal isn’t bringing many Democrats to his side, even as high gas prices and inflation threaten to doom the party’s chances of holding onto its majority in Congress.

Sen. Tom Carper (D-Del.), chair of the Senate Environment and Public Works Committee, tweeted that “suspending the primary way that we pay for infrastructure projects on our roads is a shortsighted and inefficient way to provide relief” for consumers.

House Majority Leader Steny Hoyer said he doubts that a gas tax holiday “gives much relief” and told reporters Wednesday that he doesn’t know whether it could pass the House.

Meanwhile, some of the handful of Democrats who initially proposed a gas tax holiday criticized Biden’s proposed 90-day hiatus as too short.

Republicans have uniformly panned the idea as a gimmick. And many key Democrats agree with them.

Pelosi has dismissed the idea as “good PR” and “very showbiz.” Along with a price-gouging bill, she has floated a tax on oil production and direct payments to consumers to offset the high price of fuel.

So why is Biden pushing this?

The White House is contending with a deluge of bad economic headlines, and this proposal offers Biden an opportunity to look like he’s taking action aimed at addressing one of the main economic ills angering voters, even if it has little chance of seeing the light of day.

But the gas and diesel tax — which haven’t gone up since 1993 — are not the reason Americans are getting sticker shock at the pump. The war in Ukraine, inflation and oil companies’ production cuts all play a role, and policymakers in Washington, D.C., have few tools to counteract them.

Ben Lefebvre contributed to this report.