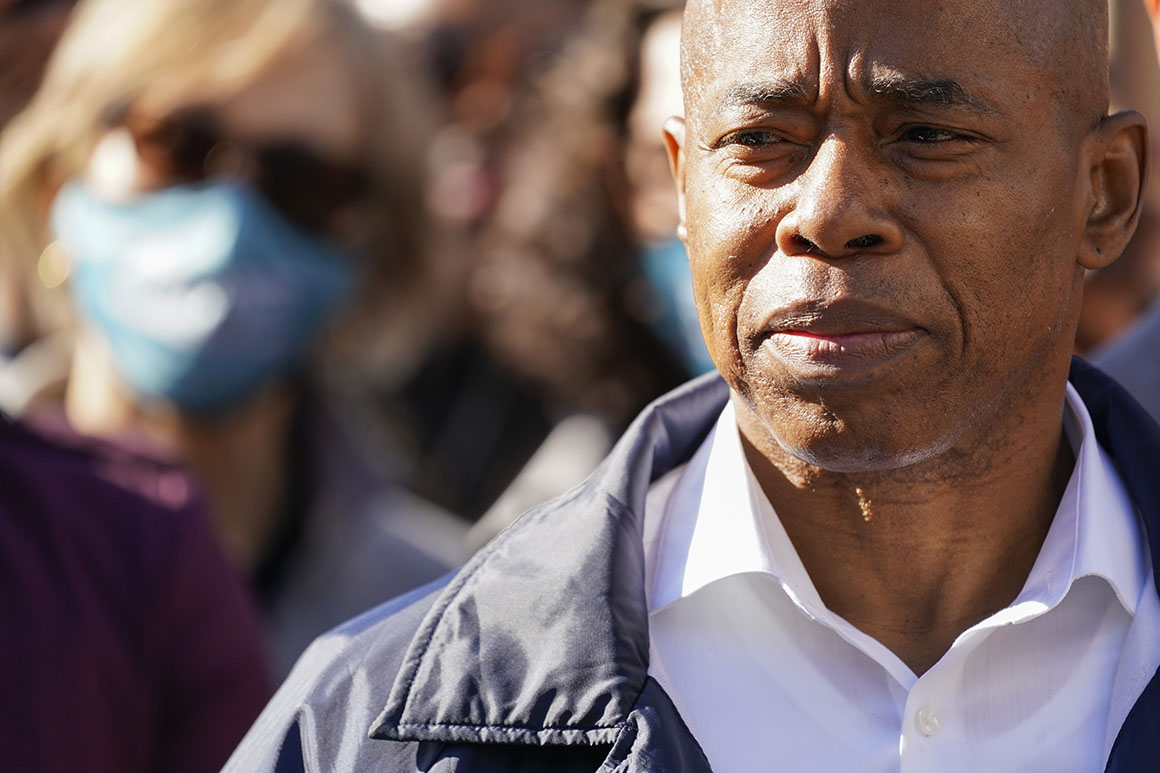 NEW YORK — As late as last year, Mayor Eric Adams still shared ownership of a Brooklyn co-op that he previously claimed he transferred to a friend, according to a financial disclosure released Wednesday morning.

The turnabout marked the latest chapter in the mysterious personal life of the new mayor of the nation’s largest city — a saga that involves overnight stays in a government building; a public tour of a cluttered, subterranean apartment; and late nights at the home of a friend with a checkered past.

A six-page form on file with the city’s Conflicts of Interest Board reveals that in 2021, the mayor still owned 50 percent of a one-bedroom co-op on Prospect Place in Brooklyn that he bought decades ago. He valued his share of the property at $250,000 to $500,000, according to the routine form that all elected officials must fill out annually.

The otherwise-routine disclosure exposed another inaccuracy in the mayor’s personal housekeeping.

When questions arose about Adams’ real estate portfolio during the Democratic primary last year, campaign adviser Evan Thies told POLITICO that Adams had signed his interest in the unit over to the other owner, and no longer had a stake in the property.

He said the campaign would amend documents referencing the Prospect Place address to clarify he no longer owned it. Last June Thies also said Adams — whose residency became a focal point in the final weeks of the primary — had not lived in the co-op for about 10 years.

That same month, Adams himself told THE CITY that the woman with whom he owned the apartment should have alerted the cooperative board of the transfer.

Not only did Adams newly disclose the property in the most recent conflicts board disclosure, he amended five past forms to register partial ownership of the property. Forms covering the years 2016 through 2020 that POLITICO obtained in during the 2021 election do not include the address. However, the same forms on the board’s website Wednesday do — and the conflicts board confirmed they have been updated.

The tale of Adams’ nebulous whereabouts begins at the Prospect Place cooperative, which the mayor purchased some three decades ago with his then-partner, Sylvia Cowan.

Throughout the campaign, Adams’ team maintained that he had ceded ownership of the unit to the former girlfriend years ago without requiring any payment from her. And the appearance of the Prospect Place address on election documents as recently as last year were all clerical mistakes, according to Thies.

On Wednesday, mayoral spokesperson Fabien Levy said that while Adams transferred ownership of the property to Cowan in 2007, she did not file a new deed for the unit.

“The mayor has not lived at, earned any income from, or controlled the property in over a decade,” Levy said.

The mayor discovered he still owned the property last year, when Adams replaced his longtime accountant, Clarence Harley, who has been blamed for several mishaps during the campaign.

“Once he got a new accountant, the mayor realized all the proper paperwork had not been filled out in the past and that a new deed had not been filed by the other property owner,” Levy said. “That process is now underway and that is why the mayor proactively and personally called [the conflicts board] before he took office and asked about what amendments needed to be made to past filings.”

After a brief stint living in a rental, Adams moved in 2017 into a Bedford-Stuyvesant brownstone he owned.

A year earlier, he had purchased a Fort Lee, N.J., apartment with his current partner, Tracey Collins, in the same building where public records show Cowan now lives.

During the campaign, Adams said he had stopped visiting Collins in New Jersey after he moved into his Brooklyn Borough Hall office in March 2020 to assist with pandemic recovery in his capacity as borough president. He went as far as pitching a mattress near his wooden desk and setting up cookware, including a blender for his trademark smoothies, in the stately municipal building.

Yet a year later, POLITICO found through eyewitness accounts and information from rival campaigns that Adams was still staying in his government office, often coming and going late at night and during the early-morning hours.

“I’ve been entering borough hall at 1 in the morning, working until 3 to 4 with my staffers who come in because they believe — and then getting up at 6:30, 7 to go to the train station,” Adams said last June, addressing the press after POLITICO first reported on his living situation. “It’s not a mystery where I am.”

He attributed his evasiveness to a desire to protect his family, particularly given his history as an outspoken NYPD captain.

He then invited reporters to inspect the trappings of his dark, cramped basement apartment at the Bed-Stuy brownstone. He was joined by his adult son Jordan, who said he routinely stayed on another floor of the home and occasionally crashed on his father’s couch.

But even after the showing, questions about the property continued.

Last year, Adams had to amend his tax returns after failing to disclose rental income to the Internal Revenue Service. The amended forms, however, contained another error that the campaign pledged to rectify: They showed Adams spent no time at the property during the previous year.

At the time, a spokesperson attributed both mistakes to the accountant, Harley, who the mayor said had fallen on hard times and was living in a homeless shelter. A report in THE CITY found that Harley had been fired from his previous job over accusations of embezzlement, and POLITICO discovered Harley was not registered in databases of state or federal tax preparers — and did not work out of the Midtown address he listed on official tax forms.

Adams has yet to release either the second version of the amended tax forms or his 2021 returns.

The Bed-Stuy address is also the subject of two unresolved complaints alleging illegal construction at the property. After the complaints were filed in July and October, the city’s Department of Buildings said Adams had called to schedule an inspection. That inspection has yet to occur, according to the database run by the agency, which Adams now controls.

Since becoming mayor — which entitles him to free digs at the storied Gracie Mansion flanking Manhattan’s East River — Adams has been spotted out on the town with one of his closest friends, Zhan “Johnny” Petrosyants, a restaurateur who pleaded guilty in a federal money laundering case in 2014. The two have hit up high-end eateries and clubs, and Adams has been known to stay over at Petrosyants’ Trump Tower apartment.

Adams also traveled the globe before taking office, vacationing Monaco in the summer and touring Ghana on an ancestral trip in December. He also flew to a political conference in Puerto Rico on the private jet of cryptocurrency billionaire Brock Pierce — a gift that would ordinarily have to be disclosed to the conflicts board. Adams said he paid the tech-savvy Pierce through an old-school travel agent, though he never provided a receipt.