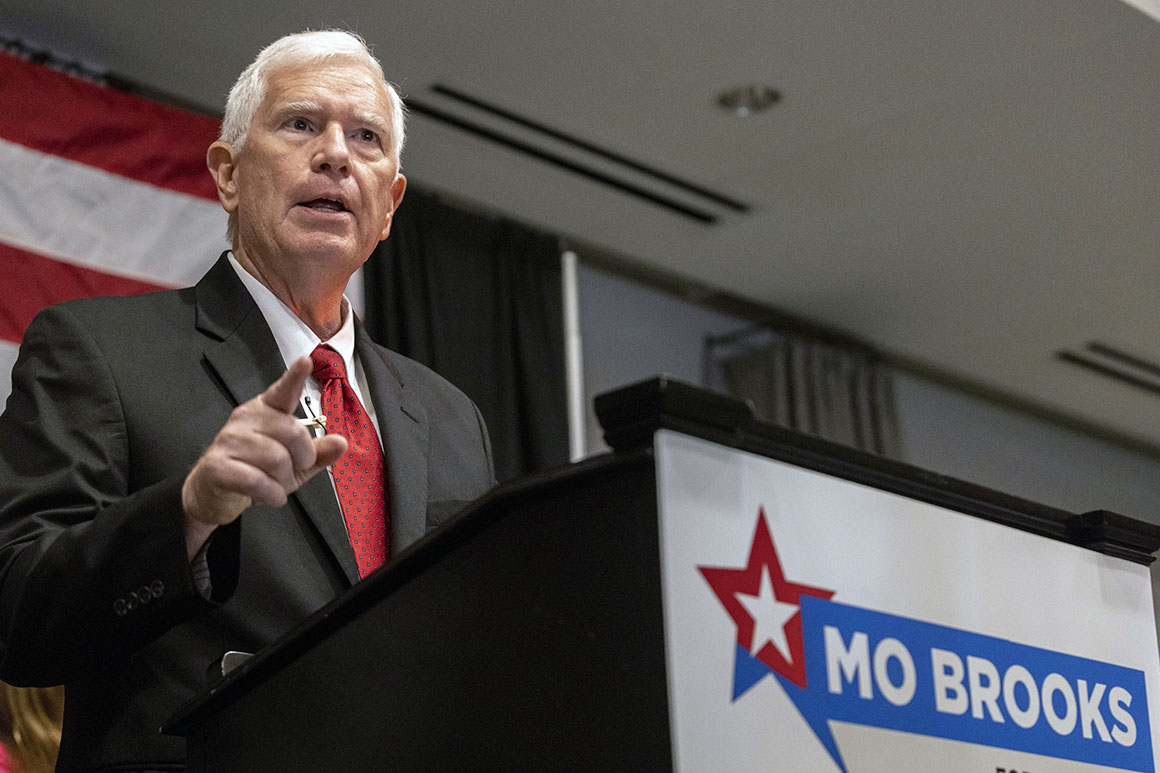 Republican voters will effectively pick the next member of Congress for a handful of open, deep-red congressional seats in Tuesday’s primaries — including a Senate seat in Alabama that’s been the subject of one of the strangest and most dramatic races of 2022.

There, the fight to replace retiring GOP Sen. Richard Shelby has come down to Rep. Mo Brooks and Katie Britt, Shelby’s former chief of staff — and, as often happens in GOP primaries these days, Donald Trump. A handful of safely Republican House districts in Georgia and Alabama will also see voters choose brand-new nominees.

And in Virginia, Republicans in two swing seats will get the chance to shape the broader House landscape, selecting their contenders to go after vulnerable Democratic districts.

Here’s what to watch for in Tuesday’s elections:

Trump and Mitch McConnell on the same page

Tuesday’s marquee race is the Alabama Senate runoff between Britt and Brooks.

Trump’s mercurial temperament has hung over the entire race. The former president first endorsed Brooks, a longtime ally, back in April 2021. But Brooks’ campaign never took off, and Trump un-endorsed him in March, citing Brooks’ unwillingness to harp on Trump’s full suite of falsehoods about the 2020 election. 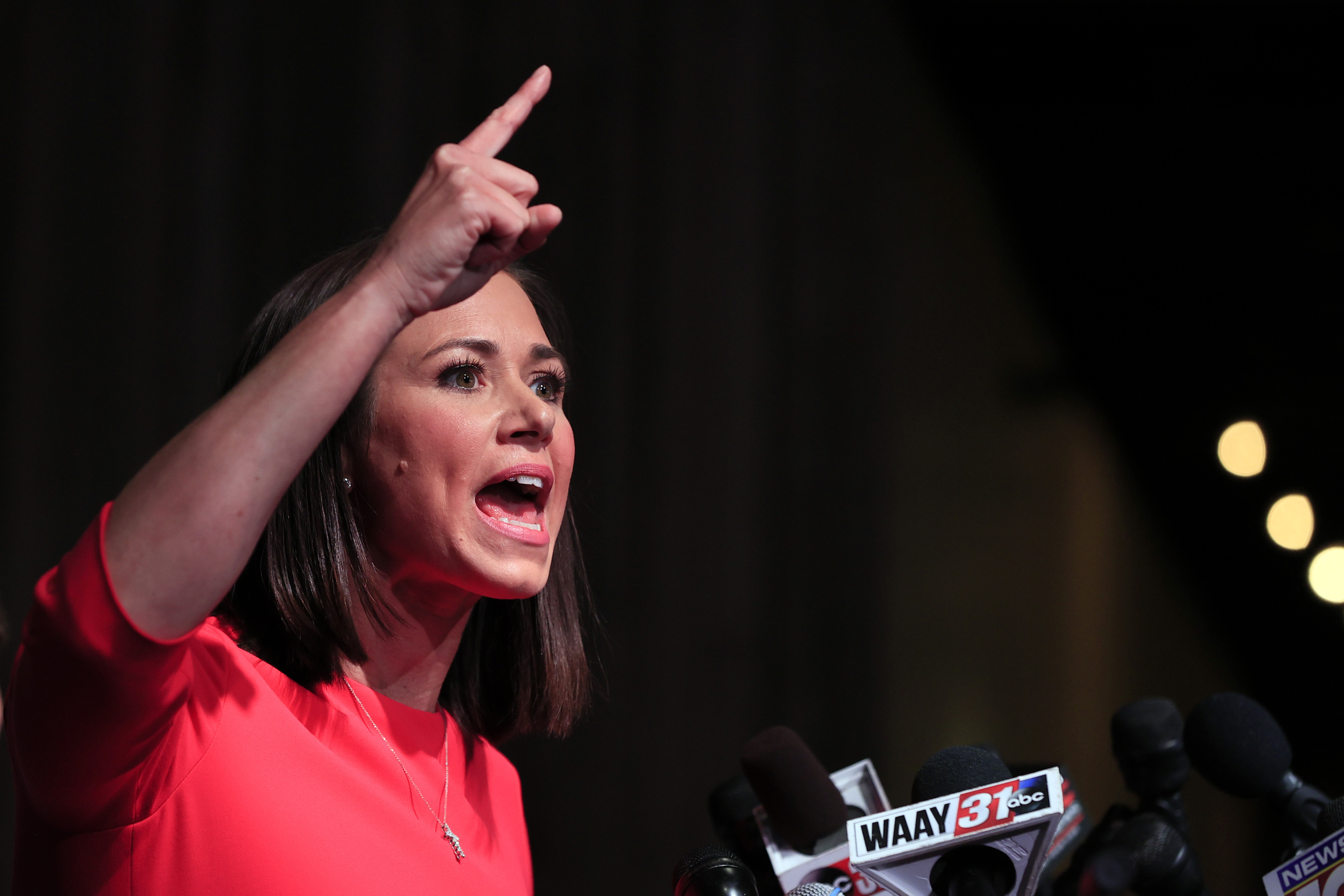 Remarkably, Brooks was still able to snag second place in the late May primary and advance into the runoff alongside Britt. That’s when Trump plunged back in, backing Britt earlier this month. In a stemwinder of an endorsement statement, the former president said Brooks’ “words caused me to withdraw my Endorsement, and Mo has been wanting it back ever since — but I cannot give it to him!”

Britt is the favorite heading into the primary, having outpolled Brooks in recent weeks. And in a twist, Trump’s backing puts him on the same side of a primary as Senate Minority Leader Mitch McConnell. Brooks has a long history of anti-McConnell statements, and the McConnell-aligned Senate Leadership Fund pumped $2 million earlier this year into a super PAC bashing Brooks (and boosting Britt).

Virginia Republicans are also picking their candidates for a pair of battleground districts that will be right in the middle of the fight for the House majority.

In Virginia’s 2nd District, state Sen. Jen Kiggans is the party favorite in a field that also includes Tommy Altman, Andy Baan and Jarome Bell. Kiggans has been tabbed as a top candidate by House Republicans’ campaign arm and has the support of the Congressional Leadership Fund — the super PAC with close ties to House Republican leadership.

Meanwhile, a Democratic group has spent heavily to promote Bell as a Trump-aligned candidate in the final days of the primary — the latest example of millions of dollars of Democratic meddling in GOP primaries this year. The winner will face Democratic Rep. Elaine Luria in November.

POLITICO’s Election Forecast rates the 2nd District as a toss-up and the 7th District as leaning Democratic heading into the June nominating contests.

Remaking the House, one primary at a time

A trio of House primary runoffs on Tuesday will likely pick long-term Republican members of Congress in safe red seats.

The race to replace Brooks in the House, in Alabama’s 5th District, sees Madison County Commission Chairman Dale Strong facing off against former Assistant Secretary of the Army Casey Wardynski. Strong narrowly missed out on winning the nomination outright in May, when he took 45 percent of the primary vote. Wardynski outpaced four other candidates at 23 percent of the vote to get the second spot in the runoff.

Georgia Republicans are also competing for two red seats there — the 6th and 10th Districts.

Georgia’s 6th District might be the most recognizable congressional seat in America after the expensive Trump-era elections there, but the makeup of the district is much different now: It was significantly redrawn during the redistricting process, with Republicans transforming Democratic Rep. Lucy McBath’s battleground into a solidly red seat. McBath hopped over to the 7th and successfully beat fellow Democratic Rep. Carolyn Bourdeaux in a member-versus-member primary, leaving the 6th open.

Republicans Rich McCormick and Jake Evans advanced out of the primary, with McCormick taking 43 percent of the vote to Evans’ 23 percent in a crowded field. Evans has Trump’s endorsement, while McCormick, a surgeon who narrowly lost to Bourdeaux in 2020, has the support of groups including the Club for Growth and Americans for Prosperity, as well as Sen. Ted Cruz (R-Texas).

In the 10th, the race is on to replace GOP Rep. Jody Hice, who unsuccessfully tried to unseat Georgia Secretary of State Brad Raffensperger in last month’s primary. There, businessperson Mike Collins narrowly edged out the party-switching former state Rep. Vernon Jones for the two spots in the runoff, 26 percent to 22 percent.

The GOP battle has broken down along familiar lines in the state: Trump has backed Jones, after dangling his endorsement in this race as a means of getting Jones to suspend his campaign for governor. Collins, meanwhile, has the support of Gov. Brian Kemp — whom Trump just tried and failed to beat in a May primary.

A handful of other big tests

Democrats have a series of statewide runoffs in Georgia, but the two biggest ones are likely the lieutenant governor and secretary of state, with candidates hoping to join a ticket headed by gubernatorial nominee Stacey Abrams. State Rep. Bee Nguyen is the favorite for the Democratic secretary of state nomination, a race that has attracted national attention amid fights over voting and election administration in the state.

The lieutenant governor primary sees former Democratic Rep. Kwanza Hall, who briefly served in Congress to finish the term of the late Rep. John Lewis, in a battle with attorney Charlie Bailey.

And in Alabama, Republicans will pick their nominee in a runoff, with two candidates running to succeed term-limited Secretary of State John Merrill. The matchup pits state Auditor Jim Zeigler against state Rep. Wes Allen. Zeigler is part of a coalition of Trump-aligned secretary of state candidates that are trying to seize control of American elections, while Allen has pushed to withdraw the state from a national compact that most election officials say is critical to maintaining and improving voting rolls.

And in the nation’s capital, Washington, D.C., Mayor Muriel Bowser is facing a heated Democratic primary that includes two current city councilmembers. Bowser is seeking a third term. Whoever emerges with the Democratic nomination will be a heavy favorite in November in the deep-blue city.