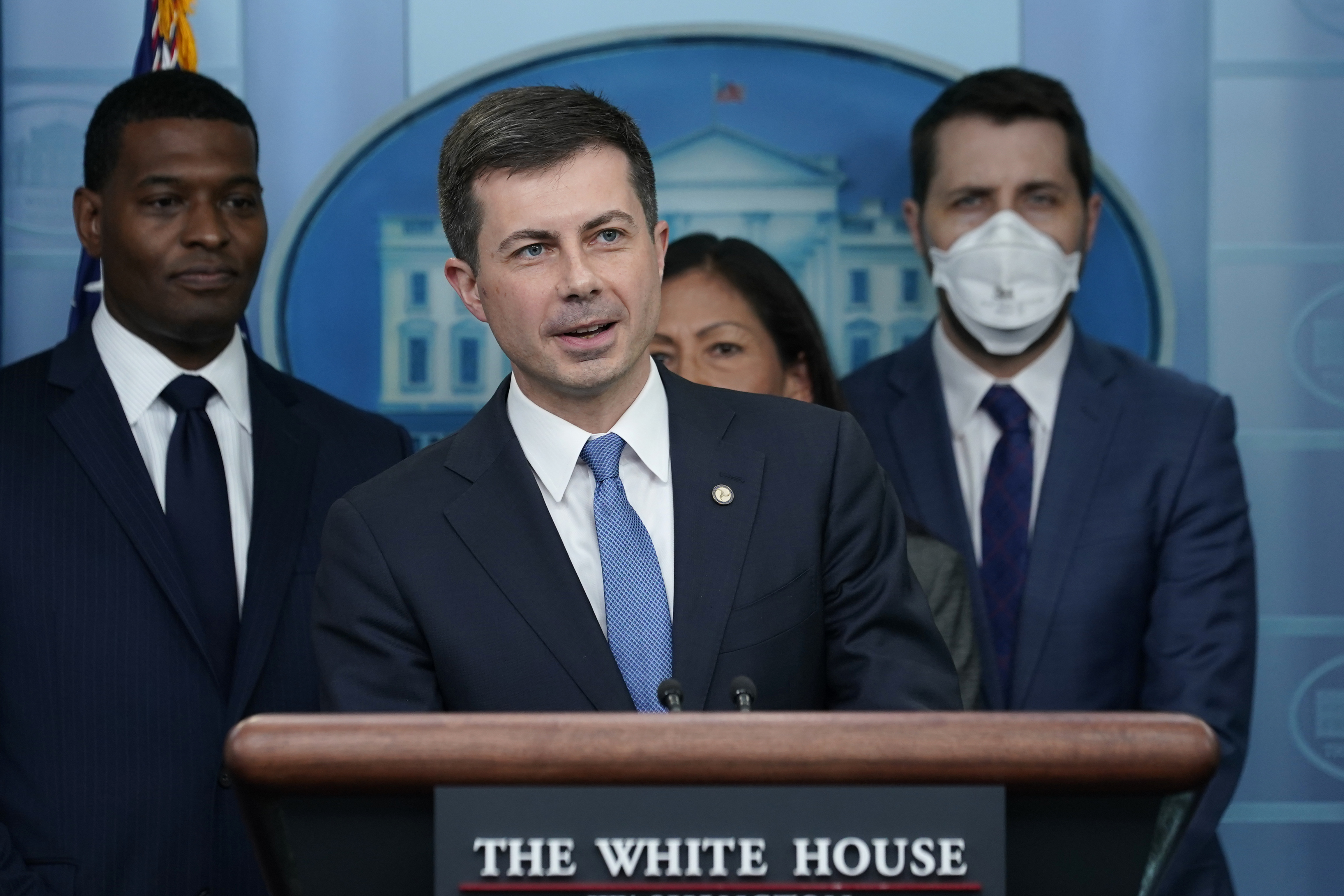 Democrats have hailed the infrastructure law, with its $550 billion in new road, rail and broadband funding, as a transformative shift for the country. But inflation — which reached a 40-year high of 8.6 percent last month — has already slashed billions from its value, forcing states to cancel or delay projects as costs balloon.

These skyrocketing building costs are undermining Democrats’ ability to campaign on their hard-won infrastructure package — the result of months of grueling negotiations — in the crucial months before the midterm elections. And Republicans are seizing on the moment to blame Democrats for stalled projects, high prices and red tape.

In North Carolina, for instance, despite the gusher of cash coming out of the federal government, state officials will add new projects to their long-term infrastructure plans only if they replace existing ones.

“If [inflation] doesn’t slow down, we’re just going to end up eating into the capacity of getting more infrastructure done,” said Robert Scaer, CEO of the global engineering firm Gannett Fleming. “We’re going to spend a lot more money for fewer projects. … The buying power of [the infrastructure law] is absolutely being diluted.”

Materials’ prices were already on the rise even before inflation hit levels unseen in decades in May — for instance, the price of steel doubled in the year before Biden signed the Infrastructure Investment and Jobs Act in November 2021. It came down briefly after that but is back near its highest point ever.

Since the bill’s passage, the price of diesel fuel, which is needed to ferry stone from quarries, which will eventually be turned into concrete and asphalt, has gone up by about $2 a gallon, an increase of more than 50 percent. And workers — if you can find them and keep them — are commanding higher pay.

Sen. John Barrasso (R-Wyo.), who until recently led Republicans on the Senate Environment and Public Works Committee, told POLITICO that people in his state are feeling the pinch.

Democrats counter that despite inflation’s impact, the investment is still historic and people are excited for the cash infusion.

“It was a once-in-a-generation increase in resources,” said Sen. Ben Cardin of Maryland. “It certainly won’t go as far as we would like it to, but we meet every year. So, we adjust as we go forward.”

Still, Cardin said Congress might have to increase appropriations to account for the lost buying power — something Democrats might not have the power to do, if the midterm elections go as expected.

Already, cities and states that have anticipated using the new federal dollars are seeing the costs of their planned infrastructure projects skyrocket, which could limit how far they can stretch their newly minted federal dollars once they arrive.

A one-mile road rebuilding project in Lansing, Mich.; a $1 million paving project near Dayton, Ohio; and an interstate interchange reconstruction in the Atlanta metro area are among countless infrastructure projects facing delays because of rising costs.

The biggest roadway project underway in the city of Raleigh, N.C. — originally a $31 million effort to widen sidewalks, add separated bike lanes and enhance transit infrastructure to a 2.3-mile stretch of road — has seen costs balloon by 70 percent since 2017 and has had to delay construction by almost a year.

“We’re definitely seeing higher inflation rates than what we typically see,” said Chad Cantrell, the project manager for the Raleigh work. But for the Raleigh project, the main cost driver isn’t concrete or fuel or even labor, though — it’s real estate. The project plans to widen the road’s right-of-way from 90 feet, in some places, to 126 feet, and “the real estate market has exploded in Raleigh, driving up real estate costs a lot higher than anyone would have anticipated,” Cantrell said.

The project, which was to be built entirely with city money, now will have to access federal funds, setting in motion an application procedure expected to add 10 months to the process and adding additional costs to comply with federal labor laws and inspection regimes.

Transportation Secretary Pete Buttigieg sought to downplay inflation fears last month, telling reporters that given the five-year term of the law, there’s still a lot of time for inflation to get under control before the money runs out.

“One benefit we have going for us is that this is a long-term vision that includes projects to begin construction almost right away and things that are further in the out years,” Buttigieg said. “The tightness we’re experiencing today is not what you would see across the five-year life of this funding, let alone the longer life of the construction projects themselves.”

And White House infrastructure czar Mitch Landrieu recently told reporters that while “nobody is not going to be affected by higher prices” right now, the infrastructure law is a long-term investment, not a one-time stimulus, and that its investments in the supply chain and other areas will bring down costs.

But the Congressional Budget Office predicted last month that inflation will stay high into next year, and diesel prices are expected to stay high through the end of 2022. And while economists and pundits have differing theories about what’s driving the labor shortage — it’s been caused by low wages, or complications from long Covid, or low immigration — no one knows when it will end.

The politics of inflation

Meanwhile, Republicans are using inflation as a political attack line, and voters are receptive. Polling shows that inflation is Americans’ top concern heading into the midterms, and they trust Republicans over Democrats to address it by a 19-percentage-point margin.

“The president’s policies fueling inflation and creating more red tape for infrastructure projects are making it worse,” said Rep. Sam Graves of Missouri, the top Republican on the House Transportation and Infrastructure Committee, in a statement to POLITICO. He cited an Eno Center for Transportation study that found that if inflation continues at or near current rates, it “will have eaten the entire IIJA spending increase.”

“That has a real cost felt by businesses and families in every corner of our country,” Graves said.

Still, Senate Environment and Public Works Chair Tom Carper (D-Del.) told POLITICO in late May that he’s “actually, for the first time in a while, encouraged about what’s going to happen to inflation,” specifically citing recent moves by the Federal Reserve, which he said had previously been “AWOL with respect to combating inflation.”

Regardless, costs continue to rise, sending construction and engineering businesses scrambling to redo estimates. In some cases, companies are inserting clauses into contracts allowing them to surpass price estimates where costs have ballooned, ultimately passing the financial exposure along to state transportation departments and local project sponsors. They’re trying to prevent delays by buying materials long before they’re ready, and in some cases, before the scope of the project has fully taken shape, in order to avoid slowing things down because a certain kind of pipe or part won’t be available for months.

Scaer said Gannett Fleming has had to revise cost estimates for airport and transit projects they’d drawn up two years ago to add escalation clauses allowing costs to rise as much as 8 percent per year. And on a smaller wastewater project, the cost of steel pipes could drive the price up by 50 percent.

“That is a significant effect on our clients — I mean, they have an operating budget,” Scaer said. “It puts the project in jeopardy, period. These towns only have so much capacity to be able to take on projects.”

Those escalations are being inserted into existing contracts. On new contracts, Gannett Fleming is now asking clients for a chance to reevaluate costs every six months.

“What we are seeing is contractor estimates being submitted that are above the DOT’s engineers estimates, and the DOT not awarding the work and then re-bidding,” said one construction industry representative who spoke anonymously to give his candid opinion. “It has really soured DOT-contractor relations and resulted in project delays.”

But states are the ones that are taking on the additional risk as contractors price inflation into their contracts. “The risk isn’t on the contractor; it’s on the state,” said North Carolina DOT Chief Operating Officer Joey Hopkins in an interview. He said state DOTs are having to revisit old project estimates to account for the skyrocketing cost of diesel and other inputs.

“We’re having to look at things in different ways and repackage projects — group smaller projects together in some cases, or split larger projects apart and make them smaller,” Hopkins said. In some cases, the state DOT has had to rebid projects because its engineers’ estimates were too low and it didn’t get any bids at that price point, only to discover that the price point was unrealistic.

Industry groups underscored the point that state DOTs haven’t fully absorbed the enormity of the inflation that’s occurring and are taken by surprise at the high cost of the bids they receive, as private companies try to pass the cost risk along to the states.

“The state DOTs, it doesn’t seem, in most states are taking the inflation into account when they’re putting out their bids,” said Michele Stanley, vice president for government and regulatory affairs at the National Stone, Sand & Gravel Association. “So their budgets are clearly not going as far, and they haven’t been prepared for that.” Stanley said her members are seeing a lot of commercial projects halted because sponsors realize they simply don’t have the budget for them.

But state DOTs are catching on. In a just-released draft of North Carolina’s plan for transportation improvement projects over the next 10 years, the state DOT warned that it would only consider new projects if they replaced existing projects. More than 800 projects are listed as being eligible for swaps, totaling $38 billion.