No major US poll has asked if respondents identify as socialist, much less what they actually think. A new survey finds that socialists aren’t just more pro-redistribution and class-conscious than liberals — they’re also far less racist and xenophobic.

Over the past few years, there has been a deluge of popular accounts announcing that many Americans, especially young Americans, are not only fed up with capitalism but also broadly supportive of the once feared S-word: socialism. According to a 2021 Fortune/SurveyMonkey poll, 42 percent of Americans have a positive perception of socialism, jumping to 55 percent among Americans aged eighteen to thirty-four. Concretely, this shift in popular support has manifested in the election of multiple self-described socialists to important local, state, and national political offices; the exponential growth of the Democratic Socialists of America (DSA); and increasing social movement activism and labor organizing.

However, it is one thing to have a positive perception of socialism and quite another to make the jump to identifying as a socialist. If DSA’s membership numbers are any indication (growing from around 7,000 in 2016 to nearly 100,000 in 2021), it is likely that socialist identification has increased in the United States. Unfortunately, no contemporary major survey of Americans actually bothers to ask respondents if they identify as socialist — much less what socialist-identifying Americans actually think. Instead, American surveys typically stick to the liberal-conservative, two-dimensional scale of political ideology. Are you “very liberal” or “somewhat conservative”? This, it is alleged, encompasses all meaningful ideological variation among Americans.

There are many reasons to be skeptical of relying on the liberal-conservative scale. First, despite the well-worn narrative that Americans are becoming more ideologically polarized, the empirical findings on polarization are, at best, mixed. I imagine that the reader would be surprised to discover that a majority of Republicans, despite their supposed conservatism, support stricter gun laws, believe that income inequality in the United States is too high, favor increases in the minimum wage, and believe that “the government in Washington ought to see to it that everyone who wants to work can find a job.” Supermajorities of Americans — and I’ve always thought of this as the best-kept secret in the social sciences — support a broadly redistributive political agenda, far further to the left than even the most liberal Democratic politician would deign to consider implementing.

Since I consider the conventional political ideology scale used in US surveys severely lacking, and with a more elementary curiosity concerning the attitudes and beliefs of American socialists, I surveyed roughly one thousand Americans in the fall of 2021.

I found that, compared to non-socialist Americans, Americans who identify as socialist are consistently more pro-redistribution, more disdainful of the rich and big business, and less likely to be ideologically racist or hold anti-immigrant sentiments. Perhaps more importantly, those who identified as socialist were similarly distinct from those who identified as liberal but not socialist. American socialists are more pro-redistribution, more class-conscious, and less racist than American liberals.

A selection of the results from the survey are presented below (see the full results here). The points represent the average response value — controlling for income, gender, education, age, and race. (The original sample is nationally representative with regard to age, race, and gender, and rake weighting was used to make the sample nationally representative with regard to educational attainment and partisanship.) For each predicted attitude, I present results comparing socialists with all non-socialist respondents as well as a separate model comparing socialists with non-socialist liberals. 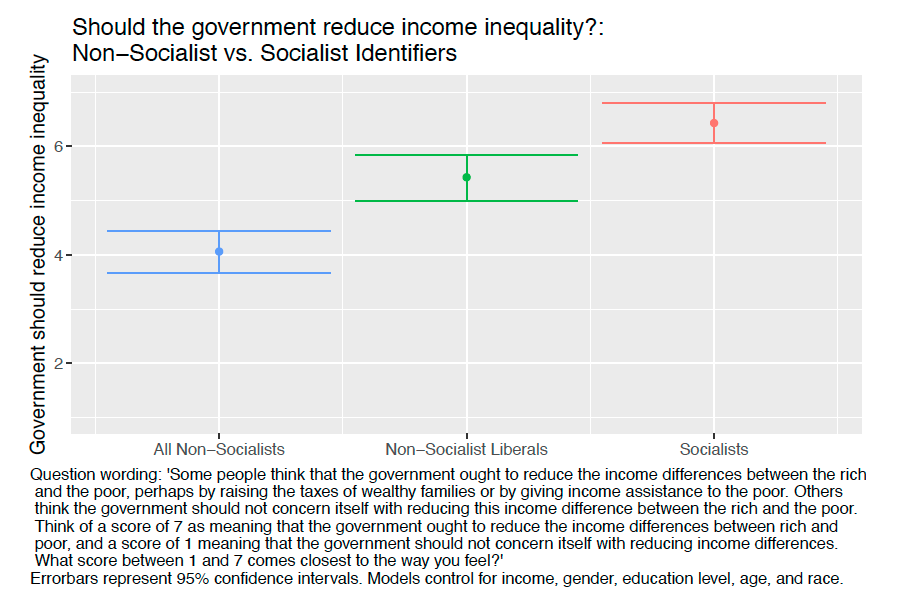 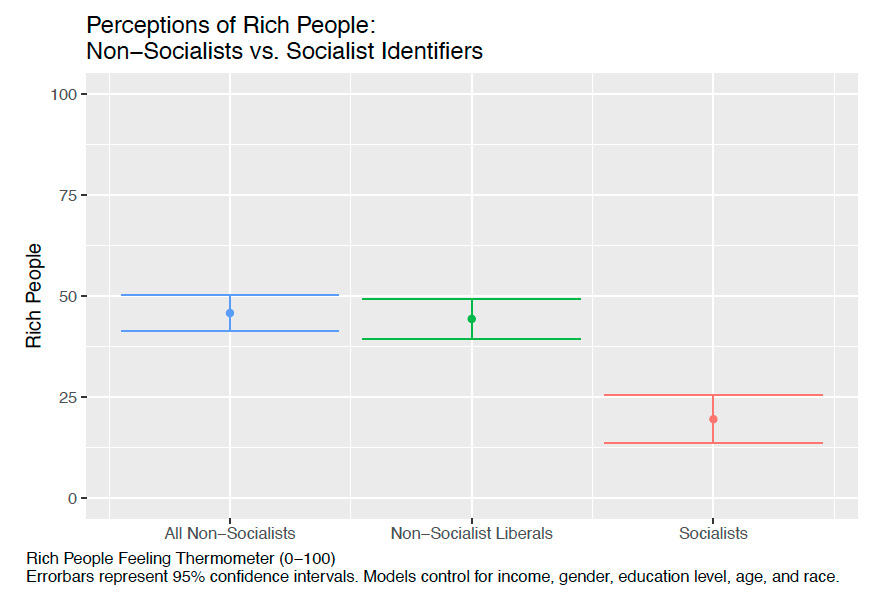 As the models show, socialists are much more likely to support a robust welfare state and reductions in economic inequality compared to Americans as a whole, as well as to American liberals. Similarly, socialist identifiers rate the rich and big business much lower on a feeling thermometer (where higher values on a 0-to-100-point scale indicate more favorable attitudes) than Americans as a whole, as well as non-socialist liberals — who, it turns out, hold almost identical attitudes toward rich people and big business as non-socialists as a whole. 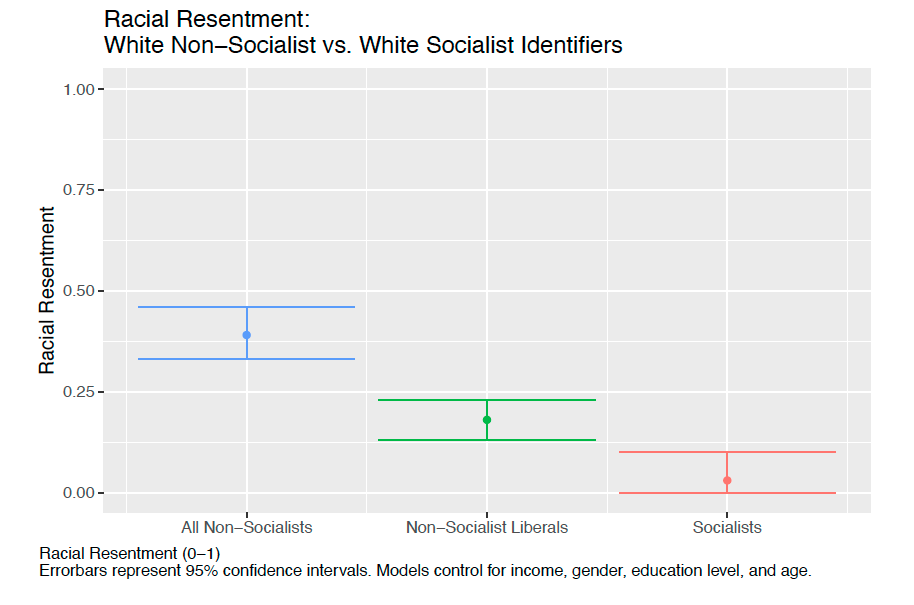 Socialists are less racially resentful (racial resentment is a measure of ideological racism commonly used in American public opinion research) than American liberals. Not only that, but those who identify as socialist are also less likely to perceive immigrants as “tak[ing] jobs away from people already here” than Americans as a whole, and — you guessed it — American liberals, too.

These results are important for a number of reasons. At the most basic level, for the first time that I am aware, we have concrete information — at the level of mass opinion — about what contemporary American socialists actually believe. These results also illustrate that US socialists differ substantively from US liberals in expected and, perhaps, unexpected ways. Despite the typical liberal-professed trope that socialists have a “race problem” — allegedly ignoring racial inequalities to focus exclusively on more important class inequalities — American socialists, at least at an ideological level, hold less racist attitudes than that supposed bastion of racial progressivism, the American liberal. Clearly, the draw of socialist identification is not unidimensionally centered on issues of class. If socialist identification truly is growing — and only repeated studies like the one outlined here can determine if this is in fact the case — these results may portend a serious change in American politics.