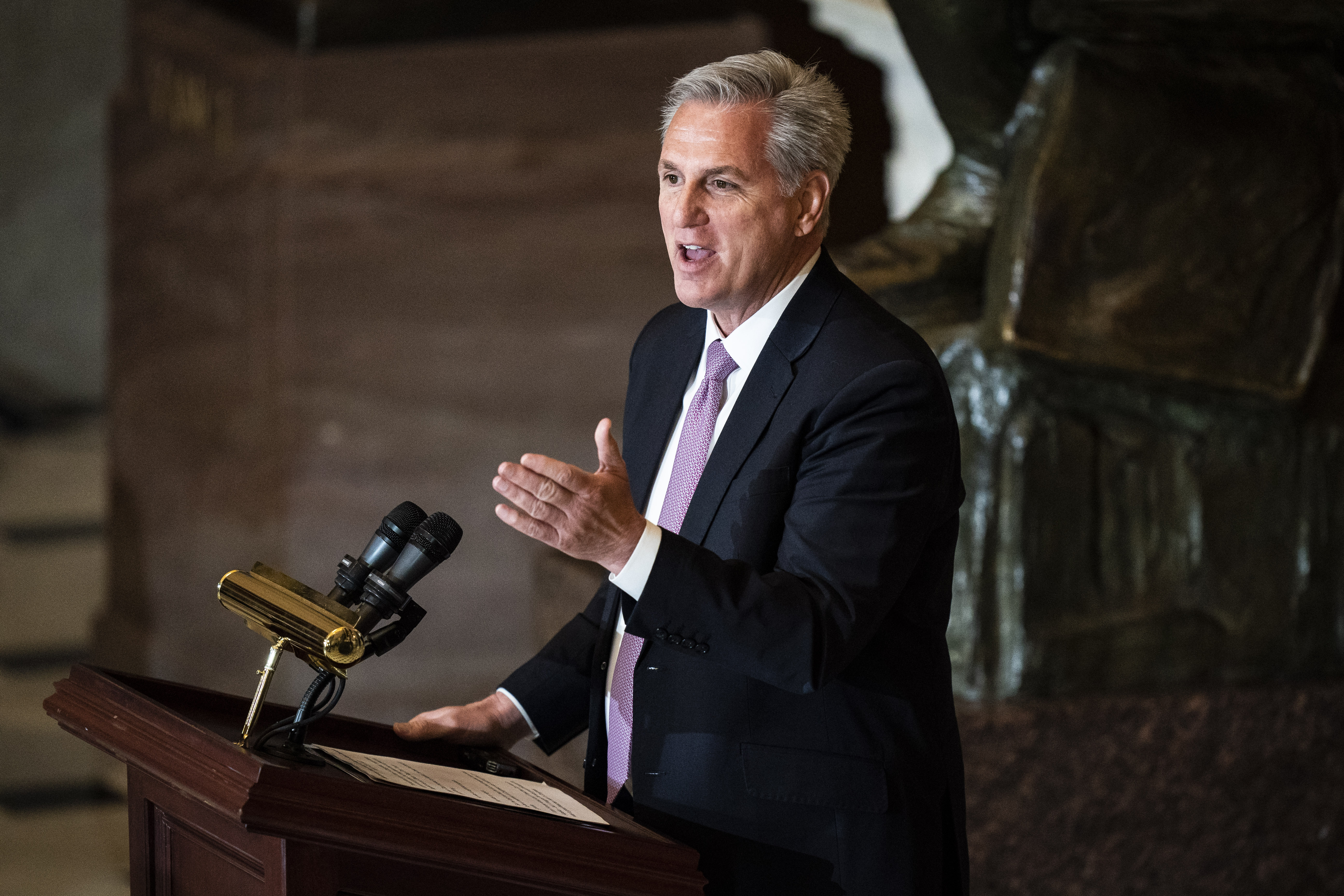 Now, McCarthy says a criminal conviction of Steve Bannon — who is facing contempt charges for defying a select committee subpoena — would be invalid because the committee doesn’t have enough members.

McCarthy’s brief, filed jointly with House GOP Whip Steve Scalise, is an extraordinary intervention by minority lawmakers to confront the majority in court — particularly. And it comes as McCarthy himself is facing a subpoena from the select committee requiring him to testify on May 31. He has yet to indicate whether he will cooperate with the panel, but his legal argument suggests he sees the subpoena itself as invalid as well.

The Republican leaders say they decided to file the brief in response to House Democrats’ own decision to submit their own brief in Bannon’s case earlier this month. Pelosi touted the filing in a May 10 press release, contending that the House was defending itself against Bannon’s contention that the select committee was improperly constituted.

“[Bannon]’s attacks against the validity of the subpoena are deeply flawed: They ignore the deference that a court owes the House regarding the meaning and application of its own rules and procedures,” House Counsel Doug Letter wrote in the filing.

At the heart of the dispute is the language of the resolution that created the Jan. 6 select committee last year. According to the resolution, Pelosi “shall appoint 13 Members to the Select Committee, 5 of whom shall be appointed after consultation with [McCarthy].”

Last July, Pelosi rejected two of McCarthy’s picks for the panel — Reps. Jim Banks (R-Ind.) and Jim Jordan (R-Ohio) — while agreeing to seat his other three selections. In protest, however, McCarthy withdrew his remaining three picks and boycotted the committee, a step Democrats described as “the Minority Leader’s failure to continue the consultation process.”

Pelosi has cited McCarthy’s decision as the reason the panel is currently operating with just nine members, rather than the 13 contemplated in the resolution. And Letter, who represents Pelosi and the select committee, has argued that it would be untenable if a minority party could hobble a committee simply by refusing to participate.

Pelosi, Letter has argued in separate court cases, has properly interpreted the rules of the House to permit the select committee to operate without its full slate of members, citing a GOP-run select committee that made a similar decision in the aftermath of Hurricane Katrina.

Three federal judges have embraced Letter’s position, arguing that the select committee is properly constituted, despite the disagreement over its membership. Overriding the House’s interpretation of its own rules — particularly when the full House repeatedly endorsed the committee’s work by voting to hold figures like Bannon in contempt — would be inappropriate, the judges argued.

“That the resolution states that Speaker Pelosi “shall” appoint thirteen members to the Select Committee is not conclusive as to whether thirteen members are required for it to lawfully operate,” Judge Timothy Kelly, a Trump appointee, wrote in a ruling upholding the select committee’s legitimacy earlier this month.

Allies of former President Donald Trump have long argued that the select committee is operating improperly because it has fewer than 13 members and because it lacks a “ranking member” appointed by the GOP leader. In dozens of lawsuits, Trump allies have cited these procedural arguments as reasons to oppose complying with the select committee’s subpoenas.

Democrats, though, say Rep. Liz Cheney (R-Wyo) has effectively served as the committee’s ranking member even though she was appointed by Pelosi. Rep. Adam Kinzinger of Illinois, the panel’s only other Republican, was also picked by Pelosi.

The McCarthy-Scalise brief was filed Tuesday by attorneys Stan Woodward and Stan Brand, himself a former general counsel of the House. Brand is also representing longtime Trump adviser Dan Scavino, who was held in contempt by the House last month for refusing to comply with a Jan. 6 select committee subpoena.

The attorneys say McCarthy and Scalise issued their filing as a result of “an institutional concern for the prerogatives of the House.” They contend that Letter’s brief in the Bannon case “misstates the law and misleads the Court (and the public) concerning any legal interest of the House in a criminal prosecution for contempt of congress.”

“It is now for the judiciary to oversee a determination of guilt and not for the House, including the Minority Leadership,” they write.

McCarthy and Scalise say they voted against the decision to permit Letter to file a brief in the Bannon case but were outvoted 3-2. Decisions by the BLAG were once routinely unanimous but they’ve more recently split along party lines, the GOP leaders note, citing a series of cases from 2019 and 2020 in which both McCarthy and Scalise dissented.

One case they didn’t note was Rep. Louie Gohmert’s December 2020 lawsuit against then-Vice President Mike Pence, part of an effort to help keep Trump in power. The House filed a brief in that case contending that Gohmert’s lawsuit was a bid to overturn the will of American voters. McCarthy and Scalise dissented.