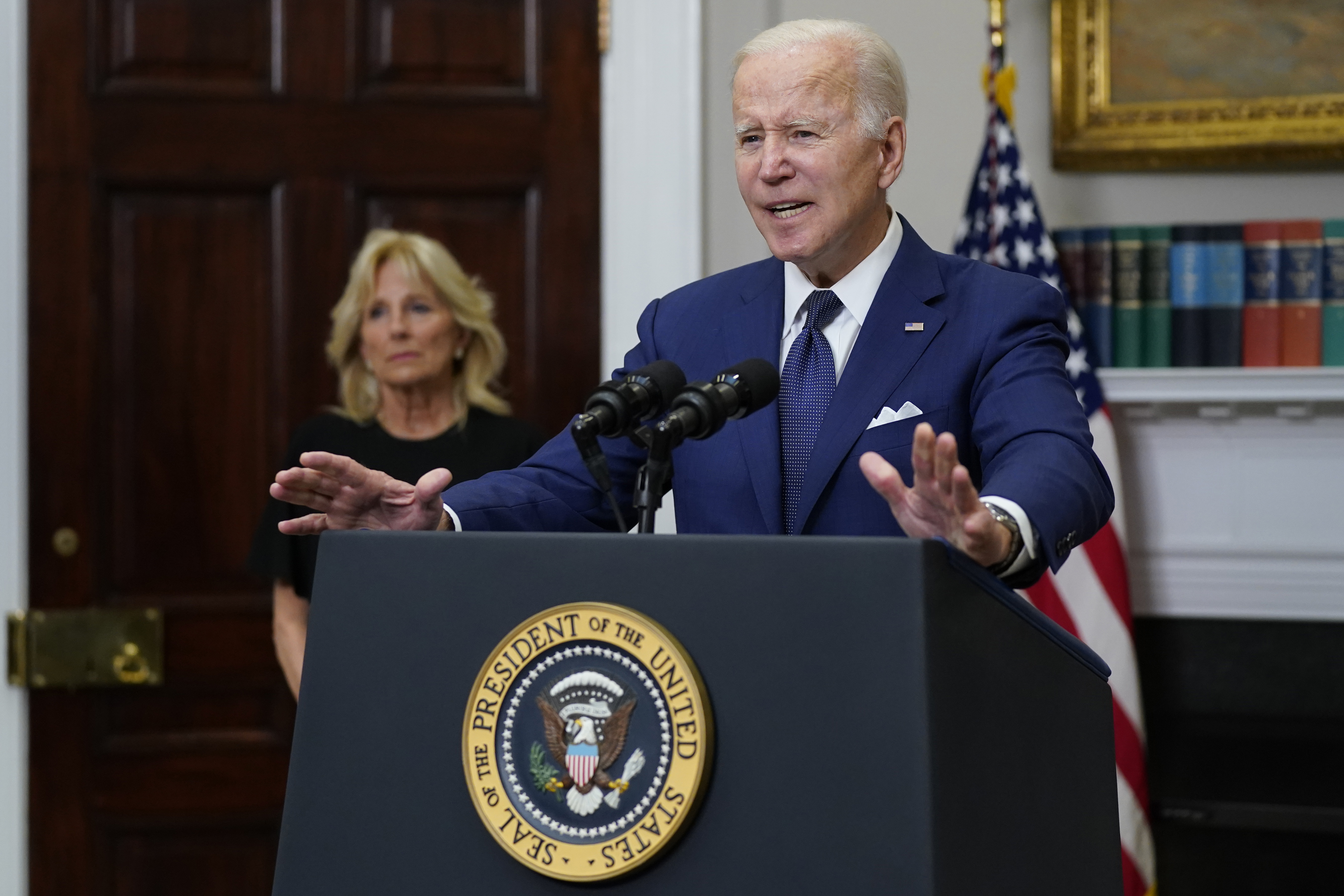 President Joe Biden again tried to comfort a nation grieving after a mass shooting, urging action to counter powerful gunmakers and repeatedly questioning why the country he leads lacks “the backbone” to stem the bloodshed.

In a prime-time address, a visibly emotional Biden asked what it would take to convince fellow lawmakers that “it’s time to act.”

“How many scores of little children who witnessed what happened — seen their friends die as if they’re in a battlefield, for god’s sake” said Biden. “To lose a child is like having a piece of your soul ripped away. There’s a hollowness in your chest.”

“When in god’s name are we going to stand up to the gun lobby?” Biden said with fervor in his voice. “Why are we willing to live with this carnage?”

Ten days after a racist mass shooting in Buffalo, N.Y., killing 10 people in a predominantly Black community, Biden returned from his trip to Japan and South Korea to another, more deadly one. This time, at least 18 children were killed at an elementary school in Uvalde, a heavily Latino town in Texas Hill Country. At least one adult was also killed, although there were conflicting reports on how many adults died.

Prior to landing, senior staff briefed Biden on the shooting aboard Air Force One and he called Texas Gov. Greg Abbott, a Republican, to offer assistance. The president also ordered flags at the White House and all federal buildings to be flown at half-staff for the rest of the week. But the mass shooting Tuesday and the thousands that preceded it followed an all-too-familiar pattern of outrage across the country followed by the expectation of stasis in Washington.

The cascade of carnage is a daunting, possibly even impossible challenge for a president and White House under increasing pressure to act — particularly as Congress appears unwilling and unable to. And the nature of the Texas shooting — more children, at another elementary school — serves as a painful reminder to Biden of how these moments of tragedy don’t actually produce legislative momentum. Nearly a decade ago, a then-Vice President Biden oversaw a task force to curb gun violence after the shooting at Sandy Hook Elementary in Newtown, Conn., left 20 children dead, all 6- and 7-year-olds, and claimed the lives of six adult staff. Biden was able to streamline a host of executive actions, but the legislative push he recommended was watered down and then defeated by a Republican-led filibuster in the Senate.

As president, gun-safety groups and activists for several months have called on Biden to take executive actions to address the growing casualties. And they’ve grown increasingly alarmed at the lack of action, a feeling that’s intensified over the last week.

“For a year, we’ve called on the president to name a national gun prevention director, and we’ve called for him to declare a national emergency. The White House has acknowledged our pleas but has repeatedly rebuffed us,” said Zeenat Yahya, policy director for March for Our Lives. “That’s unacceptable. Last week, Buffalo. This week, Uvalde, Texas. Everyone in power needs to do absolutely everything they can to fight for our lives. Children are dying. Frankly, we’re livid that the president hasn’t fought harder, and we aren’t the only ones.”

Igor Volsky, executive director of the advocacy group Guns Down America, said he was disappointed Biden didn’t use his Tuesday address to lay out a specific plan.

“How is he going to stand up to the NRA and push lawmakers to pass-live saving legislation?” Volsky asked. “Today, American parents were reminded of the dangers of sending their children to school. To those parents, Joe Biden offered no plan or strategy or vision for keeping their children safe from gun violence.”

Biden has issued a crackdown on ghost guns — his most aggressive action to date — created strike forces in the Department of Justice to curb illegal firearms trafficking and secured $50 million for violence intervention programs earlier this year in a government-funding bill. But advocates are still awaiting an update on the strike forces work, and they’ve been disappointed by the pace of progress overall.

Last week, nearly 40 of the groups signed onto a letter addressed to Biden and Democratic congressional leadership, calling on them to appropriate more money for Community Violence Initiatives, hold a Senate debate and vote on legislation expanding background checks, and establish a White House Office of Gun Violence Prevention.

“With voters expressing concern about public safety and rising crime, you have a moral and political responsibility to fight for the safer future you promise Americans on the campaign trail every election season,” the letter read. “Voters will hold all lawmakers accountable who fail to.”

Several of the same activists said they still hadn’t heard from the White House (other than to confirm receipt of the letter) and still were not aware of specific steps they are planning. Leaders of civil rights organizations also pressed the White House in the aftermath of Buffalo, urging them to hold a summit on hate, extremism and white supremacy.

So far, the White House has “taken the call for a summit very seriously,” said Marc Morial, head of the National Urban League, but they have yet to provide an answer.