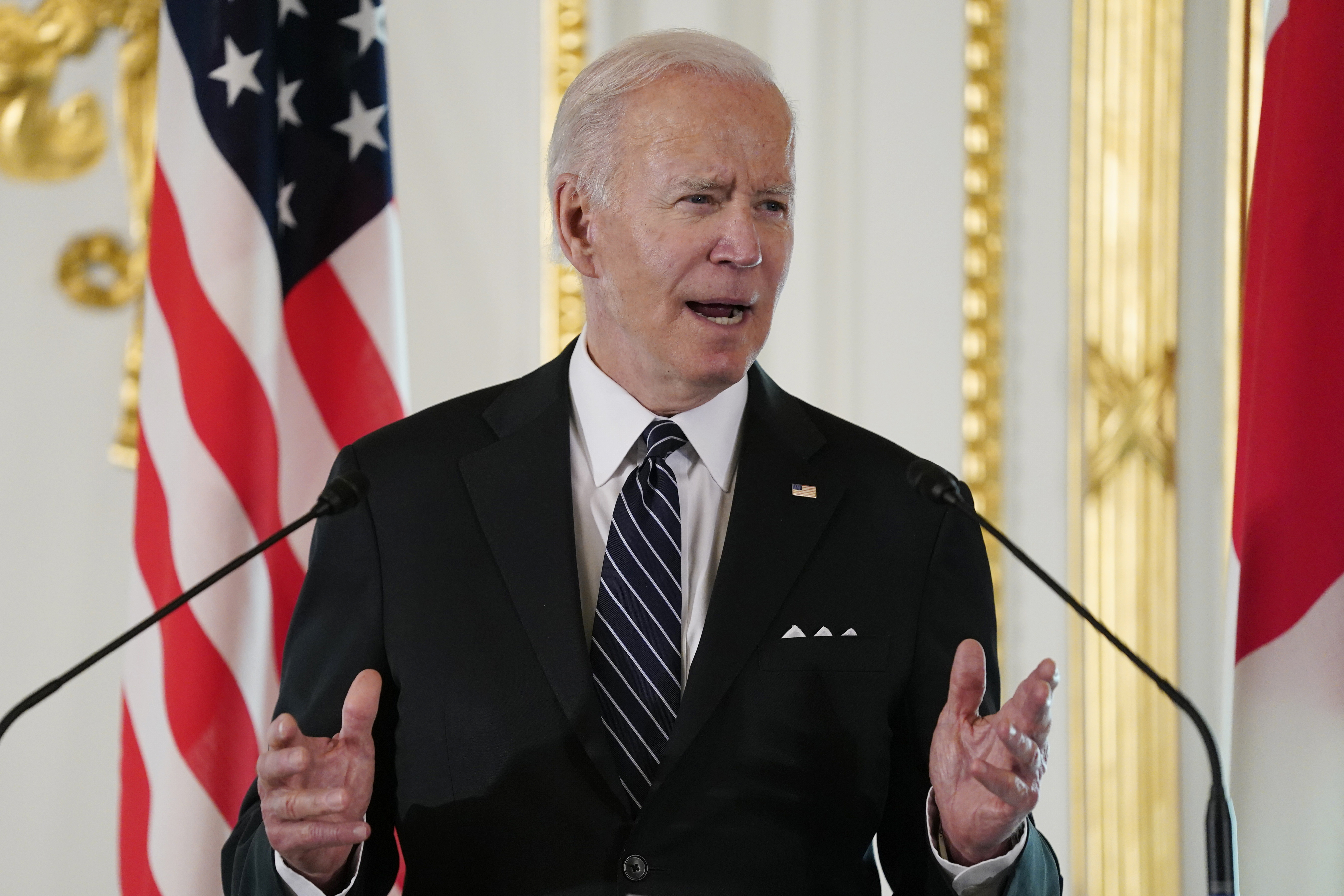 The White House moved swiftly to clarify President Joe Biden’s comments, but his assertion Monday that the U.S. will militarily defend Taiwan in the event of a Chinese invasion attempt may actually pave the way to conflict in the Taiwan Strait.

It’s the second time since October that aides have had to walk back Biden’s comments that appear to reverse the longtime policy of “strategic ambiguity” regarding U.S. willingness to defend Taiwan. “As the President said, our policy has not changed. He reiterated our One China Policy and our commitment to peace and stability across the Taiwan Strait,” a White House official said Monday in a statement. “He also reiterated our commitment under the Taiwan Relations Act to provide Taiwan with the military means to defend itself.”

The Chinese Communist Party considers “reunification with Taiwan,” a self-governing island that the CCP has never ruled, as a “historical task.” It’s also key to the credibility of President Xi Jinping as he seeks an unprecedented third term as China’s leader later this year.

Observers say Biden’s verbal commitments to defend Taiwan may encourage rather than deter Chinese aggression against Taiwan. Some analysts argue that it could prompt preemptive military action by Beijing while China’s military offensive capabilities outstrip U.S. capacity to defeat them.

“I still think this is Biden’s gut instinct reflected in mindless wording, not a policy reversal, but it is needlessly unsettling … if Biden keeps doing this, it could be a ‘big deal’ indeed,” Winston Lord, former U.S. Ambassador to China, told POLITICO in a statement. “We should maintain strategic ambiguity. We can deter Chinese attacks on Taiwan without destroying our ambiguous one-China policy, which has been a core element of our relations with Beijing for a half century.”

The U.S. relationship with Taiwan is spelled out in the U.S.-China Three Communiqués, the 1979 Taiwan Relations Act and the 1982 Six Assurances. The TRA commits the U.S. “to maintain the capacity of the United States to resist any resort to force or other forms of coercion that would jeopardize the security, or the social or economic system, of the people on Taiwan.” None of those documents specifically obligate the U.S. to military intervention to protect Taiwan in the face of a PRC invasion. But the TRA suggests an active U.S. role in maintaining the island’s status quo.

“It’s simply not correct to say that we have a commitment to come to Taiwan’s defense … the fact that [Biden] keeps misstating the policy ends up undermining deterrence,” said Bonnie Glaser, Asia Program director at the German Marshall Fund of the United States. “It might well provoke the attack that we are trying to deter because Xi Jinping could conclude that China should act while it still has a conventional advantage. He might feel pushed into a corner by a U.S. direct challenge to Beijing’s claim to sovereignty over Taiwan.”

A Rand Corporation report published Monday backs Glaser’s assessment of the balance of power across the Taiwan Strait. The report warns that the U.S. currently lacks the capacity to deter and defeat an economic blockade of Taiwan, let alone a full-scale invasion of the island. “The force requirements for the United States are likely to be heavy. The majority of U.S. reactions require sizable military forces. This force needs to be available shortly after the United States decides to react if the response is to be in any way effective,” the report said.

Taiwan says it doesn’t need the U.S. to fight its battles. “Give us something for us to defend ourselves. And speak out in support for Taiwan so that we feel that we are not alone in fighting for ourselves,” Foreign Affairs Minister Joseph Wu said earlier this month.

Despite the risks, there is strong bipartisan support for an explicit U.S. commitment to defend Taiwan regardless of whether the U.S. could actually deliver on that promise. “President Biden is right. Credible deterrence requires both courage and clarity — and Taiwan’s vibrant democracy deserves our full support,” Senate Foreign Relations Chair Bob Menendez (D-N.J.) tweeted Monday.

Rep. Michael McCaul (R-Texas), ranking member of the House Foreign Affairs Committee, echoed that sentiment. “I think China needs to understand that they can’t take this lightly and that we’re not going to sit back idly and watch them invade Taiwan,” McCaul told CNN.

Biden’s Taiwan comments came during the second half of his four-day Asia trip designed to counter China’s growing economic, diplomatic and military influence in the region. That outreach — key to his Indo-Pacific strategy and including the launch on Monday of his Indo-Pacific Economic Framework in Tokyo — has already spooked Beijing. The Chinese government views the Indo-Pacific Strategy as a vehicle “to form small cliques in the name of freedom and openness … to contain China,” Foreign Minister Wang Yi said Sunday.

The Chinese government has reason to be skeptical about White House assurances that Biden’s repeated backtracking on strategic ambiguity don’t reflect U.S. policy. Biden’s team in Tokyo had clearly anticipated that a question about Taiwan would be asked. When he first responded, Biden read carefully from his notes. On the follow-up question, in which he responded affirmatively that “yes,” the U.S. would be willing to get involved militarily to defend Taiwan, he did not consult those notes.

“A question that must be on everyone’s mind in Beijing is whether the U.S. has already changed its [Taiwan] policy. After all, no one speaks with more authority on questions of foreign policy than the president,” said M. Taylor Fravel, director of the Security Studies Program at the Massachusetts Institute of Technology. “[Biden’s] repeated gaffes may be given more weight in Beijing than subsequent clarifications of denials of [policy] change.”

Biden’s messaging on Taiwan constitutes a direct challenge to Xi’s repeated warnings that the U.S. avoid upsetting the bilateral status quo on Taiwan. “Such moves are extremely dangerous, just like playing with fire. Whoever plays with fire will get burnt,” Xi told Biden in their virtual meeting in November. “Should the separatist forces for ‘Taiwan independence’ provoke us, force our hands, or even cross the red line, we will be compelled to take resolute measures.”

Observers warn that those measures could spark a war.

“There are two dangers — Mr. Biden’s verbal blunders represent real policy, which I think the Chinese believe they do … and then we face the 2024 presidential election with a strong possibility of an even harder line by Republican candidates. And this is exactly the sort of thing that would precipitate Chinese action [against Taiwan],” said Chas Freeman, former deputy chief of mission at the U.S. Embassy in Beijing. “Almost everyone who knows the Chinese has believed that an end to strategic ambiguity — meaning an explicit U.S. commitment to defend Taiwan — is a casus belli.”

“The best way to defend Taiwan is for Taiwan to build its defense capabilities,” said retired Adm. Lee Hsi-min, former chief of general staff of Taiwan’s armed forces and a senior fellow at the Project 2049 Institute, an Arlington-based think tank in Virginia. “If we rely on the impression that the United States will intervene militarily … and don’t pay much attention to preparing ourselves, that will be very bad for Taiwan.”

But for many Taiwanese, the potential benefits of an unambiguous U.S. commitment to defend the island from Chinese invasion helps rather than harms.

“We are definitely in a tense time — given China’s weak and exposed position in the lead up to Xi’s anticipated third term, any statement by President Biden can be construed as raising the risk of sparking a reaction from China,” said Kuan-ting Chen, CEO of the Taiwan NextGen Foundation, a Taipei-based think tank. “[But] I think institutionalizing new norms around the U.S.-Taiwan relationship reduces, not raises, the risk of war.”

Alex Thompson contributed to this report from Tokyo.