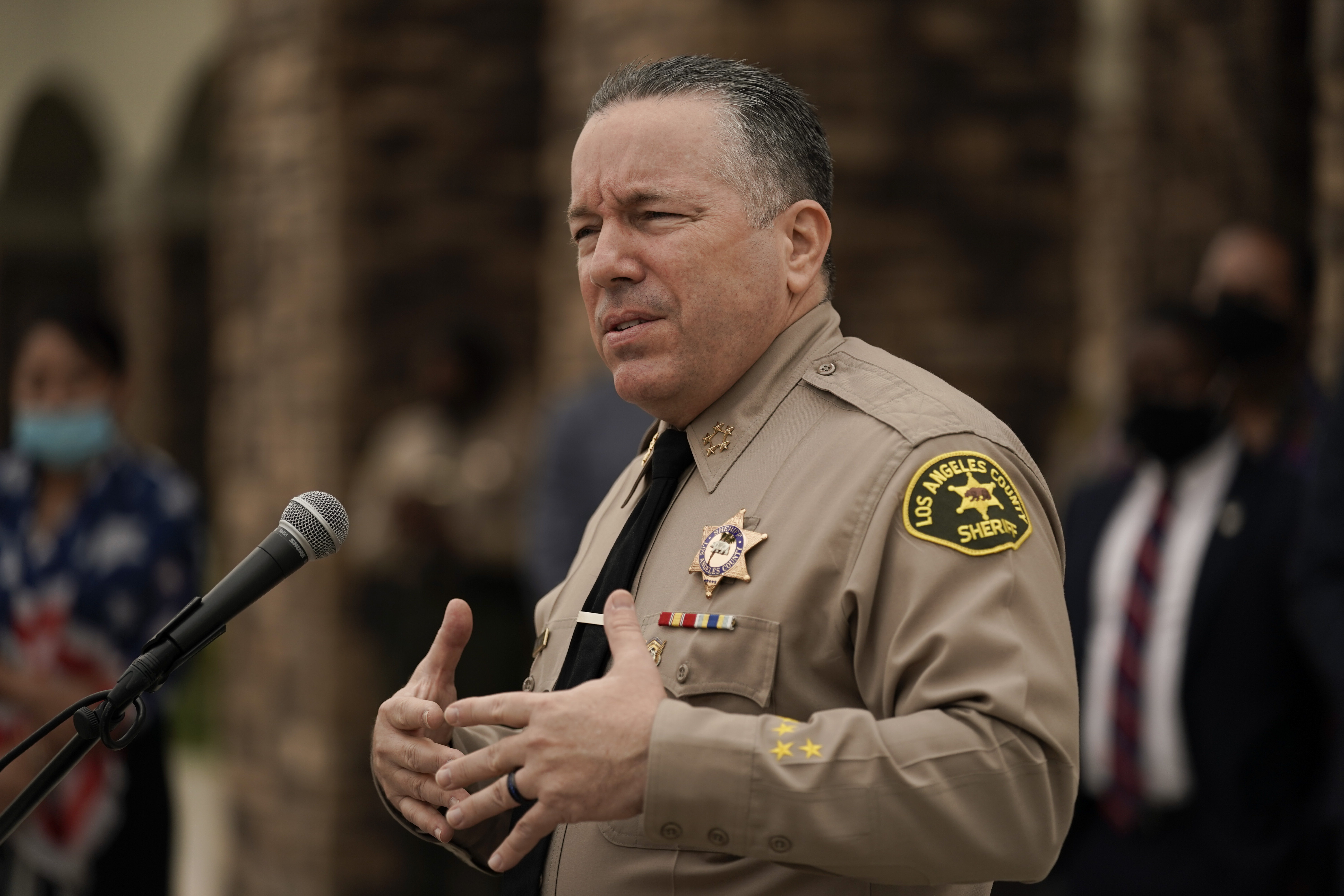 LOS ANGELES — Los Angeles Sheriff Alex Villanueva rode a wave of progressive energy to become the first Democrat and Spanish speaker to win the seat in more than a century. Now his party is having buyer’s remorse.

A campaign promise to reform a troubled department has given way to four years of scandals, attacks on journalists and conservative rhetoric around crime that has shocked Democrats and endeared him to far-right media figures like Tucker Carlson.

It may just propel him to reelection.

Villanueva could cruise to an easy victory next month in the nation’s most populous county. He is banking on the Latino vote and angst about public safety to carry him to reelection on June 7 in the reliably left-leaning area — and he could avoid a general election if he wins more than 50 percent of the primary votes.

The race will be a test of how far Democratic voters are willing to go to support a candidate who promises to clean up the streets as the party nationwide battles to hold seats in competitive districts where crime is among residents’ top concerns.

There’s a feeling of deep regret among some Democrats who propelled Villanueva, a former department watch commander who ran for sheriff in 2018, to power and celebrated his victory as a win for criminal justice reform, said Mark Gonzalez, chair of the Los Angeles County Democratic Party.

Those who backed Villanueva based on promises that he would cut ties with federal immigration enforcement, crack down on department corruption and reduce the prison population are now flabbergasted at his pivot toward Republican talking points — like blaming “wokeism” for declining living standards in the county — and his vitriolic reactions to those who question his policies.

“The same people that helped fund and put you forward in 2018 are the same people that you’re criticizing,” Gonzalez said of Villanueva. “My mama taught me ‘don’t bite the hand that feeds you,’ and that’s the first thing you’re doing.”

Villanueva’s campaign did not respond to multiple emails and calls requesting comment on this story. The sheriff has at many points defended his record as a reformer, pointing out that he banned the transfer of county inmates to federal immigration custody without a criminal warrant. He also touts his ban of deputy gangs in the department, though a civilian oversight commission says it’s still a problem.

But Villanueva may not need the support of his party to win reelection, especially in a year where Californians are on high alert about crime, public safety and homelessness. As a well-funded, Spanish-speaking incumbent who enjoys broad support from law enforcement, Villanueva may be able to rise above the cacophony of controversy that has surrounded his tenure.

A survey of registered voters in the city of Los Angeles conducted this week by BSP Research, a Los Angeles-based polling firm, found that 55 percent of Latino voters had a favorable perception of Villanueva, compared to 24 percent who viewed him unfavorably. BSP Research estimates 1.2 million Latinos will cast votes in the city of Los Angeles alone during the general election, equal to a record turnout for the 2018 presidential election.

Roughly 40 percent of Los Angeles County residents of voting age are Latino, according to data from the U.S. Census Bureau. Like other groups, Latino voters have consistently ranked public safety as a major concern in local polling.

Andrew Acosta, a Democratic political consultant who has worked on law enforcement campaigns in California, said Villanueva’s tough-on-crime platform and calls to remove homeless encampments could be attractive to voters. He also questioned how closely residents are following media coverage of the department’s scandals — most recently, an attempt to investigate a local journalist for reporting on a coverup in the department.

“Just because he says outlandish things and columnists in the LA Times write about him, I don’t know if that makes him a dead man walking,” he said. 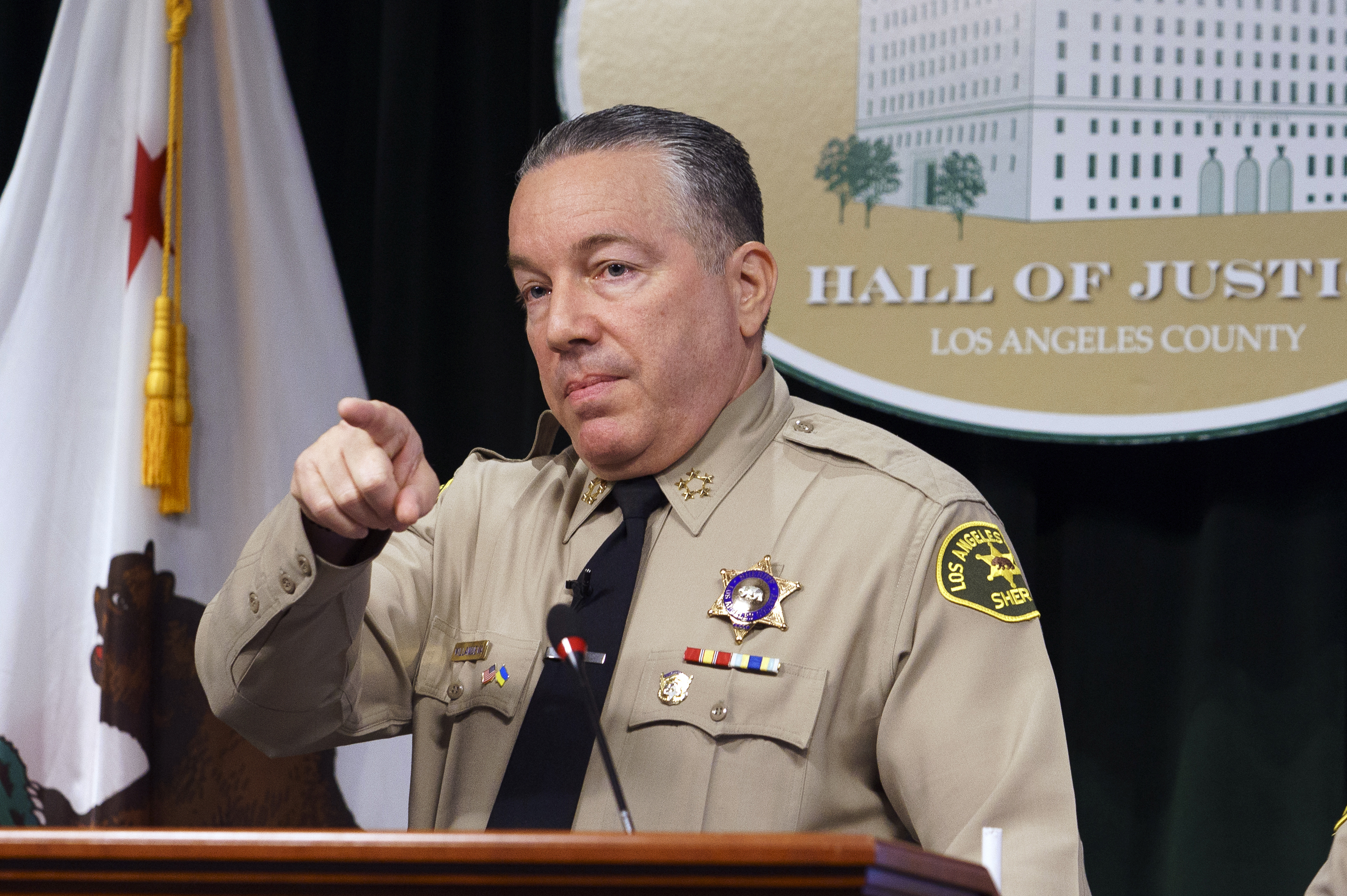 Villanueva’s defensive attitude toward criticism has caused some, including current and former county supervisors, to question whether he’s fit for the job.

Four years ago, Villanueva ousted Sheriff Jim McDonnell, a Republican-turned-independent, with promises to clean house and reform the sheriff’s department around principles of “community policing and ethical standards of conduct.” He vowed to rid the ranks of corrupt officers and make decisions driven by “facts, not agendas.”

Instead, his tenure has been marked by petty rifts brought about by criticisms of Villanueva’s handling of deputy misconduct and a lack of department transparency. Just a few weeks into the job, county supervisors blasted Villanueva for reinstating a deputy accused of stalking a woman. He also angered fellow county officials by defying subpoenas to testify about deputy gangs in the department, a problem LA County has grappled with for decades, and stonewalling investigators who sought to learn more about civilian deaths at the hands of law enforcement.

He’s known to lash out at those who question him. He launched a criminal investigation into the county’s top watchdog, Inspector General Max Huntsman, and accused him of being a Holocaust denier without any evidence. When LA County Supervisor Hilda Solis spoke out about police brutality toward people of color, Villanueva cast a slur used in Mexican culture to demean women as traitors.

Gonzalez, the LA County Democratic Party chair, remembers how furious Villanueva was the first time he publicly criticized him. At that point, nine months into Villanueva’s term, some Democratic delegates were calling on the sheriff to quickly enact the reforms he had promised on the campaign trail. Gonzalez had told the Los Angeles Times that members felt a “bit disappointed by some of the stuff we see in the press about him.”

“He was so pissed about that,” Gonzalez said in an interview this month. “My personal fear — am I being followed? I legit was concerned for my own safety, to think, ‘would he be that petty to do that?’ That unfortunately crossed my mind.”

But the episode that reverberated nationally came last month following a Los Angeles Times investigation that alleged Villanueva had covered up an incident where a deputy knelt on an inmate’s head. At a morning news conference days after the report, Villanueva announced a quest to find the person responsible for leaking surveillance video.

Using a long wooden dowel, he pointed to a screen with the words “WHAT DID THEY KNOW AND WHEN DID THEY KNOW IT?” Underneath were photos of his political rivals — Huntsman and challenger Eli Vera — and LA Times reporter Alene Tchekmedyian.

“These three people have some important questions to answer,” he said. Hours later, he denied having ever implicated the Times reporter in a criminal investigation, contrary to the comments he had made earlier that day in a room of reporters.

In spite of those incidents, which were well-publicized in Los Angeles, Villanueva has a number of structural advantages that will make him formidable, including an overwhelming funding edge, said Sonja Diaz, executive director of the UCLA Latino Policy & Politics Initiative.

The incumbent sheriff has raised more than $1.8 million this election cycle, according to the Los Angeles County Registrar-Recorder/County Clerk — more than the other eight candidates in the race combined. Most of that support has come from individual donors, including department staff.

Cecil Rhambo, chief of the Los Angeles Airport police, has raised around $300,000, slightly ahead of Vera and another leading contender, former Long Beach Police Chief Robert Luna. But those candidates might struggle to consolidate enough support to force a November runoff, Diaz said, especially after the county Democratic Party decided to not endorse a candidate before the June primary.

Diaz argued Villanueva is also getting what amounts to free advertising from billionaire Rick Caruso, a Democratic mayoral candidate who has spent millions on ads painting the region as overrun by homeless encampments and criminal activity. Villanueva’s television and social media spots have pushed a similar message.

A recent ad depicted Villanueva praying for strength to protect the people of Los Angeles from crime, to help the city’s homeless population — and to defend his department from criticism.

The spot featured dramatic pans over statues of saints and slow-motion shots of the sheriff kneeling in St. Alphonsus Church in East Los Angeles, backlit by sun shining through stained-glass windows.

“Lord, give me the humility and patience to not let the naysayers discourage our fine women and men from serving with honor,” Villanueva said in an echoing voiceover. “Amen.”