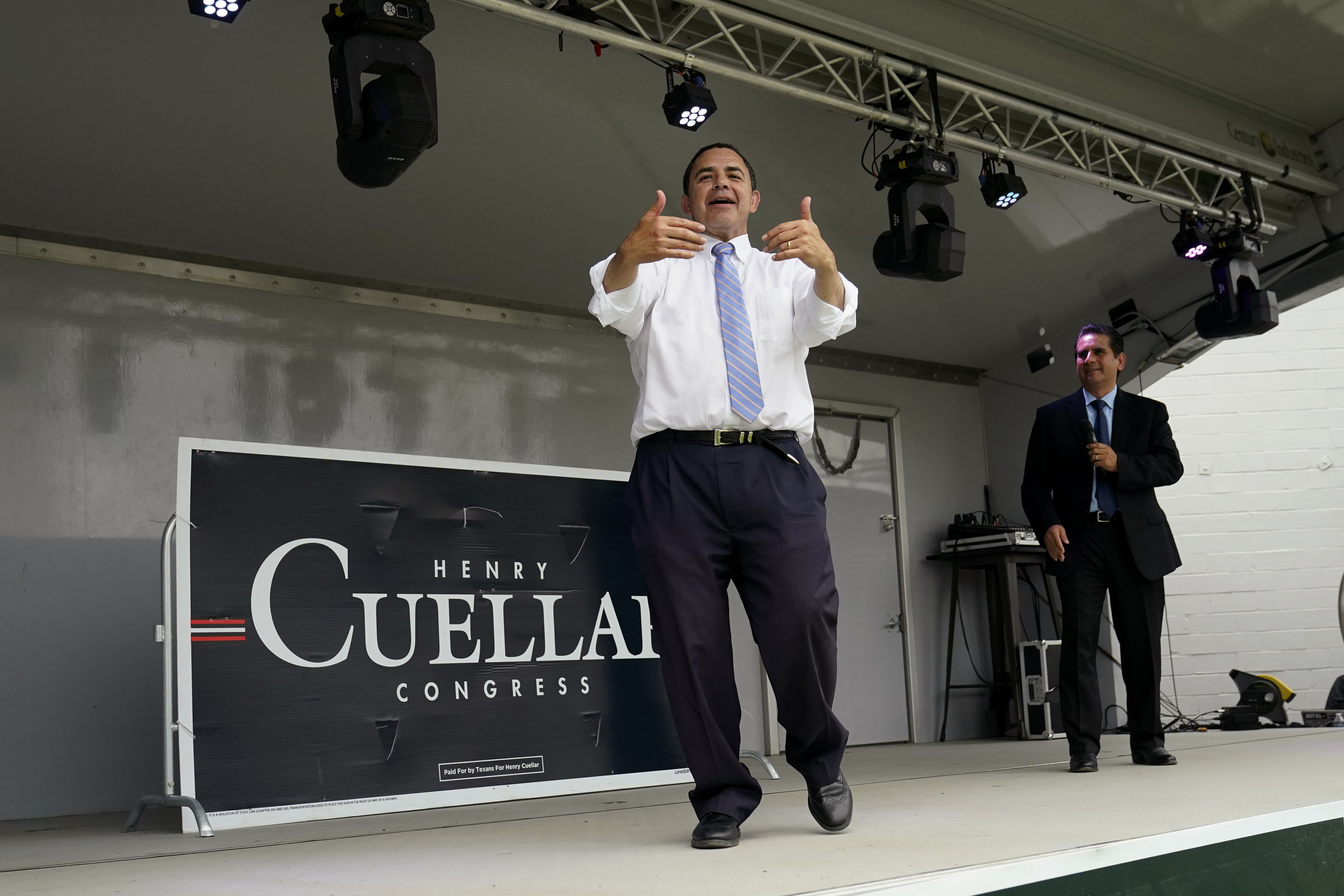 House Democrats have vowed to do whatever it takes to protect abortion rights. But there’s one step many don’t want to consider.

Only a handful of them have endorsed the primary challenger running against Democratic Rep. Henry Cuellar — their only colleague who opposes codifying Roe v. Wade into law — in a Tuesday runoff in Texas. And as dozens of House Democrats gathered on the Capitol steps earlier this month to rally support for abortion rights, they really didn’t want to talk about why.

“I don’t have anything to say about that,” said Rep. Andy Levin (D-Mich.).

Democrats have called the Supreme Court’s preparations to strike down Roe an existential threat to the future of abortion access in the U.S., but there’s been little shift in the party’s stance toward Cuellar. Just five House Democrats out of 221 have publicly endorsed challenger Jessica Cisneros, who is within striking distance of the 17-year incumbent. Cisneros finished second by about 1,000 votes in the March primary, and she fell narrowly short of beating Cuellar in 2020, too.

Democrats say the dynamic is more complicated than it appears. Even progressive members of Congress point to a myriad of reasons they’ve stayed out of the race despite their urgency to fight for abortion rights — particularly the taboo of challenging incumbents, which can lead to friction and ostracization within the caucus. Others say they’re reluctant to weigh in against a colleague to preserve personal relationships, noting Cuellar’s opposition isn’t the reason Democrats can’t codify Roe.

And several privately acknowledge a political factor, too: They fear that boosting an ultraliberal candidate in Cisneros means the party could be more likely to lose the battleground district in South Texas this fall.

Since POLITICO reported the Supreme Court’s draft majority opinion that would overturn Roe, Cuellar, a lifelong Catholic, has affirmed his opposition to abortion — except in the case of “rape, incest, and danger to the life of the mother,” per a recent statement.

Meanwhile, Cisneros and her allies are trying to capitalize on the moment. She has begun to run ads contrasting herself with Cuellar on abortion, and EMILY’s List — the pro-abortion rights group that backs female Democratic candidates — has chipped in with its own TV ads as well.

Still, Cisneros has only earned one new congressional endorsement in that time, from Rep. Pramila Jayapal (D-Wash.), who had previously backed Cisneros in 2020 but was planning, until recently, to stay out this time.

“Historically, there’s always been a lot of reticence on endorsing against an incumbent,” said Rep. Alexandria Ocasio-Cortez (D-N.Y.), an early supporter of Cisneros who famously came to power by ousting a sitting member of Democratic leadership in 2018. “Even when I first got here and even just mentioned the possibility, it was a huge scandal in the caucus and I think that there’s a lot of that that still remains. But frankly, I think that when a member deserves it…”

Asked why she thought her colleagues’ desire to rid Congress of anti-abortion-rights Republicans didn’t extend to Democratic incumbents, Ocasio-Cortez said only: “You’ll have to ask them.”

The reluctance of some of the House’s leading progressives to wade into the race reflects the competing pressures that the party faces, particularly in a tough midterm. Party institutions exist to protect incumbents, and members are wary to abandon that axiom even when it clashes with other core principles.

The Democratic Party, for instance, has not officially imposed a so-called litmus test on the issue of abortion. But its membership has been drifting leftward for years: Speaker Nancy Pelosi recently noted how much her caucus had changed in the last decade, from abortion being a sticking point in Obamacare negotiations to the election of what she called a “pro‑choice Congress” now.

And as several senior Democrats have noted, Cuellar’s vote in the House is not the reason Democrats can’t pass a bill to protect abortion access — which would be stuck in the Senate.

Cisneros, however, argued that the math could one day change. 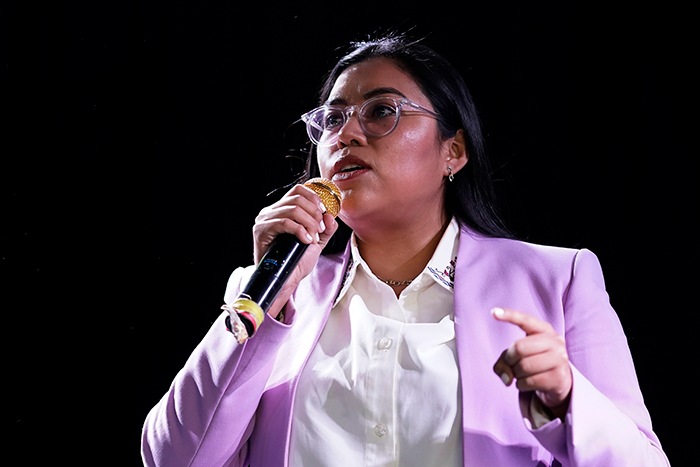 “He could very much be the Joe Manchin of the House,” Cisneros told reporters Friday, referencing to the Democratic senator from West Virginia who regularly blocks pieces of the Democratic agenda. “We just cannot risk that. He cannot be the determining vote on the future of reproductive freedoms in this country.”

Party leaders’ continued support for Cuellar — he has Pelosi’s endorsement, and House Majority Whip Jim Clyburn campaigned for Cuellar in Texas recently — has infuriated progressive organizations. But most progressives in Congress say they are, this time, sticking with their caucus’ unspoken rule on steering clear of incumbent’s primary contests.

“I admire her candidacy and her courage but I as a practical matter stay out usually when there’s a colleague involved,” said Rep. Ro Khanna (D-Calif.), who won his own seat in 2016 by challenging, for a second consecutive election, then-Rep. Mike Honda (D-Calif.).

Yet two years ago, Khanna backed now-Rep. Marie Newman (D-Ill.) in her primary challenge against another anti-abortion Democrat: then-Rep. Dan Lipinski. The difference, Khanna said, is that he recalled from his time in the Obama administration that Lipinski was a “a vociferous opponent” of the Affordable Care Act.

“In general, you don’t see people endorse against colleagues,” added Rep. Mark Pocan (D-Wis.), another senior progressive in Congress. “I don’t think it’s so much a statement on any candidate as it is informally how this place operates.”

Pocan acknowledged that he also had endorsed against then-incumbent Lipinski: “I had met Marie and talked to her a number of times before I made that decision,” he said, noting he hadn’t heard from Cisneros’ campaign.

Even Newman has declined to formally support Cisneros, citing her desire to remain focused on her own competitive primary next month against a colleague, Rep. Sean Casten (D-Ill.). “I haven’t endorsed anybody,” Newman said, adding, “But I love her. And I want her to win desperately.”

And Newman expressed anger that the party institutions were propping up the incumbent: “I’m very disappointed in leadership’s support of Mr. Cuellar.”

Cisneros, meanwhile, has received strong backing from national progressives including Ocasio-Cortez and Sens. Bernie Sanders (I-Vt.) and Elizabeth Warren (D-Mass.). Some political observers, though, were surprised that she hasn’t gotten more help since the primary in March, when the once-longshot candidate forced the nine-term incumbent into the first runoff of his career.

EMILY’s List waited until the last week-and-a-half of the race to go up with TV ads to help Cisneros, even as the millennial challenger was being outspent by Cuellar and two super PACs allied with him — including one trying to muddy the waters on Cuellar’s abortion position. The spots from the EMILY’s List super PAC, backed by a $550,000 buy, targeted Cuellar for opposing abortion rights, among other criticism.

That buy helped Cisneros keep pace with Cuellar on TV. In the final full weeks of the race, she and EMILY’s List have managed to outspend the pro-Cuellar forces on TV. And with five days to go before the runoff, Jayapal — who endorsed Cisneros in 2020 — shifted her stance and decided that she would indeed weigh in on the race. The decision, she said, was in part because of Roe.

“At a time when our reproductive freedoms are under attack by an extremist Supreme Court, we must elect pro-choice candidates that will fight to make sure abortion remains the law of the land,” Jayapal said in a statement to POLITICO.

Earlier this month, Jayapal said she wouldn’t endorse this cycle, saying that as co-chair of the Progressive Caucus’ PAC, “this year is a little different for me.” The Washington Democrat is also seeking a leadership position in the next Congress.

There’s another complicating factor in the 2022 cycle, which several Democrats speculated had led their colleagues to remain on the sidelines.

Republicans are targeting Cuellar’s district, as the region has become increasingly competitive. President Joe Biden won it by just 7 points in 2020 after Democratic presidential candidates carried the seat by double digits for years. The GOP’s likely candidate, Cassy Garcia, is widely expected to wage a competitive general election, and Republicans believe a battle over abortion could help hem in the predominantly Catholic city of Laredo.

And neighboring Rep. Vicente Gonzalez (D-Texas) said he thought Republicans would have an easier time going after the district if Democrats nominate a progressive.

“South Texas is a moderate area. Once you get south of San Antonio, politics change,” Gonzalez said. “Progressive politics, I don’t think, will get people elected in the long term.”

“It’s no different than running a Blue Dog in the Bay Area or in New York City or in Boston. I wouldn’t support that as a Blue Dog,” he continued. “I would not support funding and backing candidates in places they don’t fit the district.”