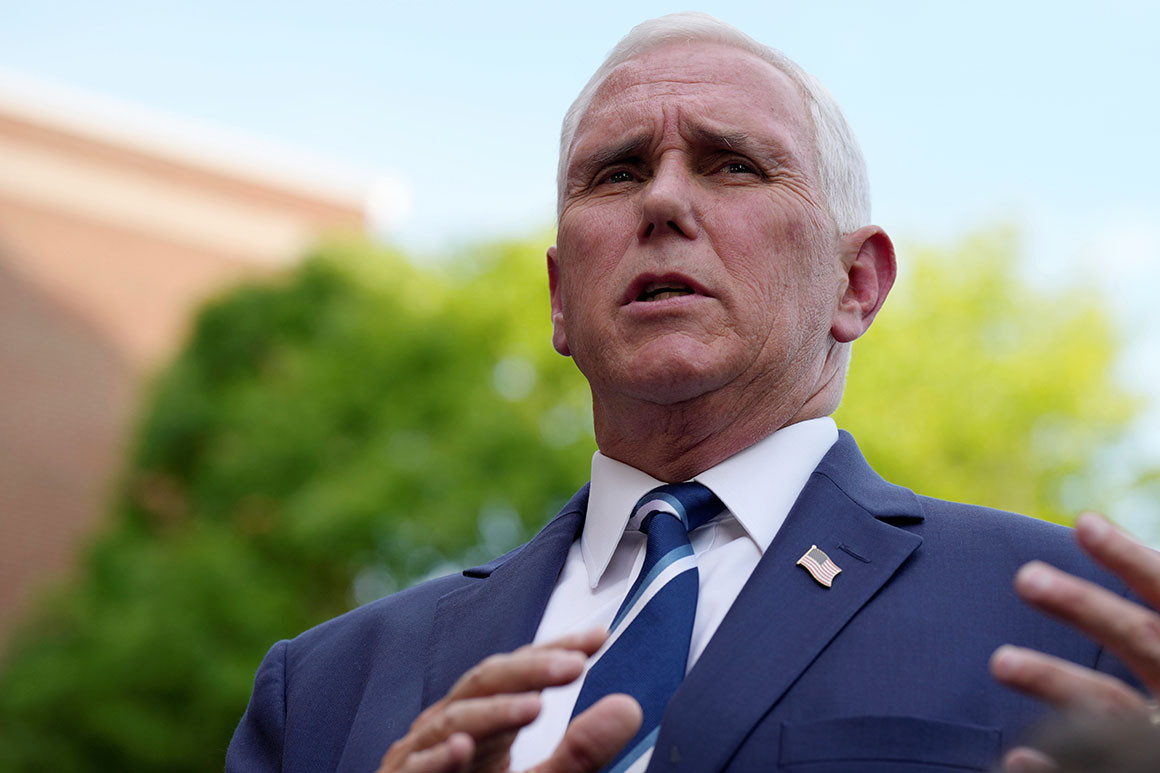 After years of loyal service and genuflecting as Donald Trump’s former No. 2, Pence is capitalizing on carefully choreographed split screens with his former boss on everything from endorsements and appearances to policy and photo-ops.

Nearly a year after he was booed and jeered as a “traitor” at the Faith and Freedom Coalition conference in Orlando for his refusal to overturn the election results, Pence’s tightly scripted comeback ahead of a potential 2024 presidential bid is showing returns.

Since POLITICO reported on the Supreme Court’s draft opinion overturning Roe v. Wade, Pence has moved to channel a newly simpatico GOP base. He is finding purposeful ways to contrast with Trump on issues ranging from highlighting his own decadeslong record of anti-abortion advocacy to calling for a muscular response to Russia’s invasion of Ukraine. Next week, he’ll cross Trump by holding a rally with Georgia Gov. Brian Kemp on the eve of his GOP primary, a direct challenge to Trump’s endorsement of Kemp challenger David Perdue.

And he’s embraced familiar terrain on the culture wars, launching his own so-called freedom agenda ahead of the midterms, focusing on issues like parental choice in the classroom. Long before Republicans like Florida Gov. Ron DeSantis warred with Disney, Pence was attacking the entertainment company as far back as 1999 in an op-ed criticizing the film “Mulan.”

“The issue set feels like it could be coming to him a little bit because he’s good on the culture war stuff,” said David Kochel, a veteran Iowa Republican strategist who said he heard positive reviews of Pence’s April visit to the state.

“As we get into the sanctity of life issue and the potential of having Roe. v. Wade overturned, he has been a champion of life,” said Bob Vander Plaats, president and CEO of The Family Leader, a conservative Christian parent organization for the Iowa Family Policy Center. “It’s definitely in his comfort zone. If this becomes a big issue, a defining issue when it comes to 2024, that will be in his wheelhouse.”

Now, fresh off of warmly received appearances in the early GOP presidential primary voting states of South Carolina and Iowa, and ahead of scheduled stops in New Hampshire and North Carolina later this month, Pence is winning back political ground. Booing crowds have been replaced by cheering, swollen audiences of social conservatives.

“Pence is doing everything he can to position himself if there’s an opening in 2024,” said Alex Conant, a Republican strategist and former adviser to Marco Rubio’s 2016 and Tim Pawlenty’s 2012 presidential campaigns.

Pence’s campaign-in-waiting is perhaps the strongest test case of whether Trump’s appeal with his base is purely personality or policy-driven, all id or also ideas-based. If the former, Pence’s relaunch is likely doomed. If the latter, Pence’s fidelity to Trump’s record and his decades of toiling in the trenches of the culture wars could pay off. No 2024 GOPer, after all, is closer to Trump’s accomplishments while in office.

Pence has executed this high wire political comeback against a backdrop of presidential-like photo-ops on the Ukrainian border and a stop at a crisis pregnancy mobile ultrasound unit last week. He has undertaken quiet moments that are more the province of a head of state. He spoke at the Indiana funeral of one of the Marines slain in the Afghanistan exit last year, Cpl. Humberto Sanchez. And while he was doing an Omaha fundraiser for Rep. Don Bacon (R-Neb.), he visited the family of Cpl. Daegan Page.

By month’s end, Pence will have visited the early primary states of Iowa, South Carolina and New Hampshire at least three times each since leaving office. Last month, he sold out and keynoted a Story County Republican Party fundraiser on an Iowa swing.

“He’s 100% pro-life, and people love all the things he’d done through the Trump administration,” said Iowa freshman Rep. Randy Feenstra, a key caucus power broker ahead of 2024 who joined Pence in serving breakfast at Iowa’s 4th District Convention in late April. “I mean, the tax cuts, the Supreme Court justices, that really bodes well for him.”

Pence is also lavishing attention on South Carolina, the “First in The South” presidential primary state packed with his brand of rock-ribbed social conservatives. His first post-vice presidency event was at the Palmetto Family Council, the Columbia-based conservative nonprofit. Last year, he enlisted state Sen. Josh Kimbrell of deep-red Spartanburg County to help him navigate the state’s politics.

“He’s building a groundswell of grassroots support here,” Kimbrell, a former Christian talk radio host, said. “He’s done a great job with that. He’s done a very good job of connecting with what I would say is the bread and butter of the Republican primary electorate — hitting the right cities, going to the right events, meeting the right kind of voters that he would need to be successful if and when he decides to run for president.”

At a fundraising gala for the Carolina Pregnancy Center in Spartanburg last week, he drew a crowd of approximately 2,000 people. In remarks, he contrasted himself with Vice President Kamala Harris, herself a potential 2024 presidential contender should President Joe Biden not run for reelection.

“How dare you?” Pence said, responding to Harris’s similar refrain directed at GOP lawmakers who want to restrict abortion rights in a speech to EMILY’s List, the pro-abortion rights political action committee. It was his third trip to the state since leaving office. Pence’s Southern swing even earned a prebuttal from Democratic National Committee Chair Jaime Harrison.

“It’s not just enough to go to Iowa and South Carolina and these places,” said one Pence adviser. “You’ve got to leave an impression. I think we’re doing that.”

“People were thrilled to see him because he’s so respected, and he just embodies the values of South Carolina — of faith and family,” Newman said.

While Trump’s response to the draft abortion opinion has been subdued, Pence seized on the issue in his South Carolina visit. Last July, Advancing American Freedom — his 2024 campaign shop-in-waiting — filed an amicus brief to the Supreme Court arguing in support of Mississippi’s 15-week abortion ban. And though he has never fully articulated whether he supports a total ban on abortion without exceptions — a ban on abortion has been the cri du coeur of his political life.

“Having been involved in the cause of the right-to-life for all of my adult life, politics is the least of my concerns, that we have a historic opportunity to restore the sanctity of life to the center of American law, and I welcome that,” Pence told a gaggle of local and national reporters in a rare media conference. He often favors more controlled interviews with friendly outlets.

Pence has headlined or plans to hold fundraisers for more than a dozen candidates in pivotal races in key states. On May 24, he’ll appear at a fundraiser for the North Carolina GOP. Two days later, he’ll be back in New Hampshire for an event with the Federation of Republican Women. Earlier this year, he made an 11-state, $10 million ad buy targeting vulnerable Democrats over energy prices through Advancing American Freedom.

Back home in Indiana and newly wealthy for the first time, Pence is living his best life after inking a two-book, seven-figure deal and marshaling speaking fees. He resides in a $1.9 million dollar, seven-bedroom mansion in tony Carmel, a northern suburb of Indianapolis. There, he chips away at his autobiography — the first volume of which is expected to be published by Simon & Schuster in 2023 — and enjoys his family ritual of pizza and O’Doul’s on Friday nights.

Pence is all strategy, and Trump is all instinct.

Farther from home, Pence’s path to a potential 2024 GOP primary is still fraught and marked with potential obstacles. A March Morning Consult poll of 2024 GOP candidates found Pence with just 10 percent of support, trailing Trump — 54% — and DeSantis — 14 percent. Even given his focus on South Carolina, he faces other prospective candidates who have even firmer footholds there — favorite son and daughter candidates, including former Ambassador and Gov. Nikki Haley and Sen. Tim Scott — and DeSantis, who is making inroads with fundraisers there.

“Pence has more strengths and more vulnerabilities than almost any other potential candidate,” Conant, the Republican strategist, said. “High name ID, familiarity with donors and experience are his clear strengths. His vulnerability is that he doesn’t have a clear base. And his relationship with President Trump is a big unknown.”

But what seemed like an impossibility a year ago — Pence as a serious contender ahead of 2024 — is now very much a possibility. He’s resuscitated himself back from the political dead.

“He clearly left the administration with his stock very low,” Conant said of Pence. “But he’s executing a methodical strategy to better position himself. Pence is all strategy, and Trump is all instinct.”