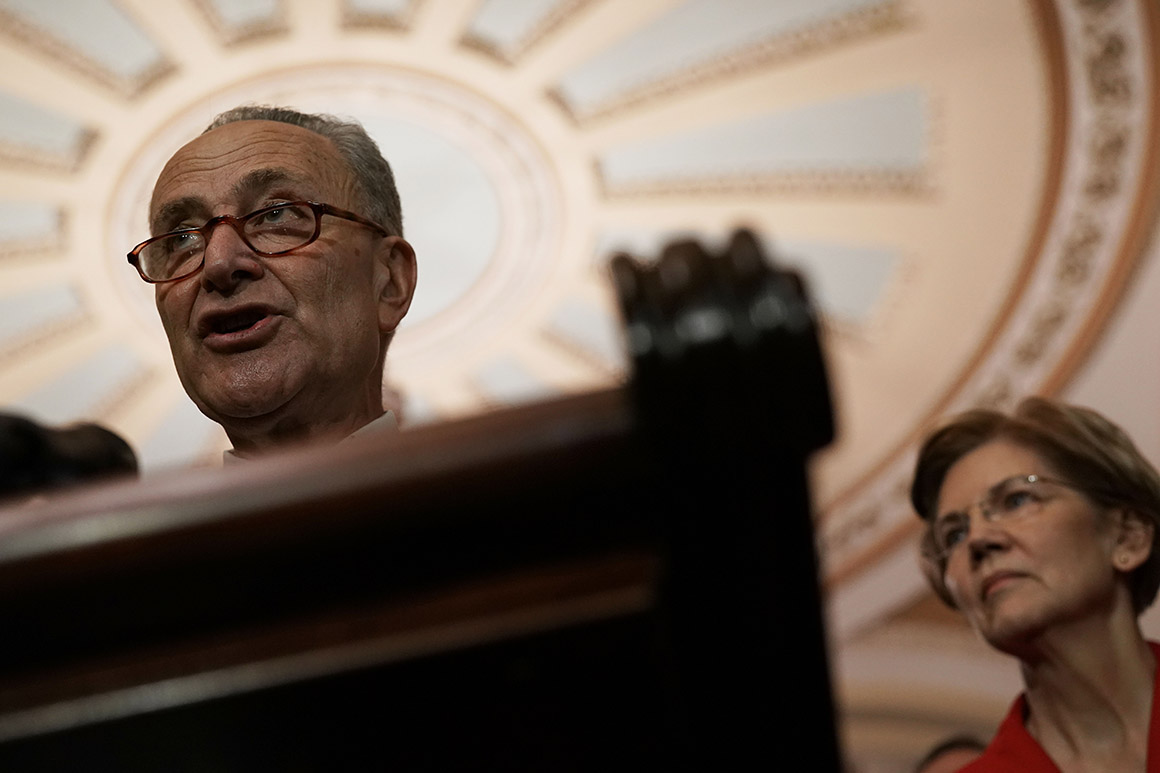 Senate Democrats don’t want President Joe Biden to make a move on canceling student loan debt until they get one last chance to push him to go as big as possible.

Majority Leader Chuck Schumer, as well as Sens. Elizabeth Warren (D-Mass.) and Raphael Warnock (D-Ga.), communicated to the White House that they want Biden to hold tight on any executive action until they can press him one last time, according to two people familiar with the matter who spoke on condition of anonymity. The three senators met this week to plot student loan strategy and are seeking a meeting with Biden as soon as he will do it, one of the people said.

“Senator Reverend Warnock has heard from countless Georgians about how burdensome student loans are hurting their pockets and making it harder to navigate our changing economy,” said a Warnock spokesperson. “President Biden told the senator months ago he wanted to meet about this issue, and the senator wants to make sure the president hears why Georgians want strong debt relief before the White House takes any action.”

The student loan fight is a key friction point between Biden and Senate Democrats. Schumer, Warren and Warnock are pressing Biden to cancel as much as $50,000 in student loan debt for borrowers, but Biden is considering much smaller relief.

The progressive wing of the party believes big debt relief will energize voters, though centrist Democrats generally prefer a more measured approach. Warnock himself could benefit as he prepares to face voters this fall.

Biden publicly ruled out $50,000 in cancellations last month but said he’s considering canceling “some” student loan debt. Schumer and his allied Democrats have been unbowed, keeping pressure on Biden to take big action ahead of the midterms and avoid making a move too minor to help at the ballot box. The White House did not return a request for comment.

There’s no meetings on the books, but a White House source anticipated that Biden would be amenable to one.

A spokesperson for Warren declined to comment on private conversations with the White House. But Warren is all in on the issue, even setting up a war room to push back on criticisms that canceling student loan debt would be unpopular or inordinately benefit the wealthy.

In an interview last month, Warren made clear she wants Biden and Congress to work hand-in-hand to produce far more tangible results for Americans ahead of the midterm elections — with student loans at the top of priority list.

The Biden administration has paused repayments on student loans through August, and the president himself has sounded a sympathetic note about the importance of some cancellation is needed while aides explore just how big he can go. His administration is exploring a way to limit higher earners from getting the benefits of cancellation.

Biden is expected to make an announcement soon, and Senate Democrats want to make sure they are some of the last people to speak to him before that decision. After this story published, the NAACP’s national director of youth and college Wisdom Cole said that “canceling $10,000 in student debt will not help the Black community. Means-testing will not help the Black community.”

There’s a risk, of course, in upsetting the handful of fiscal conservatives in the Democratic Party while some of Biden’s agenda is still up in the air in Congress. Privately some Democrats would like any announcement on debt relief to come later in the year to put it closer to the elections and to give them more time to negotiate a party-line climate and tax reform bill without upsetting any of their centrists.

Jonathan Lemire contributed to this report.