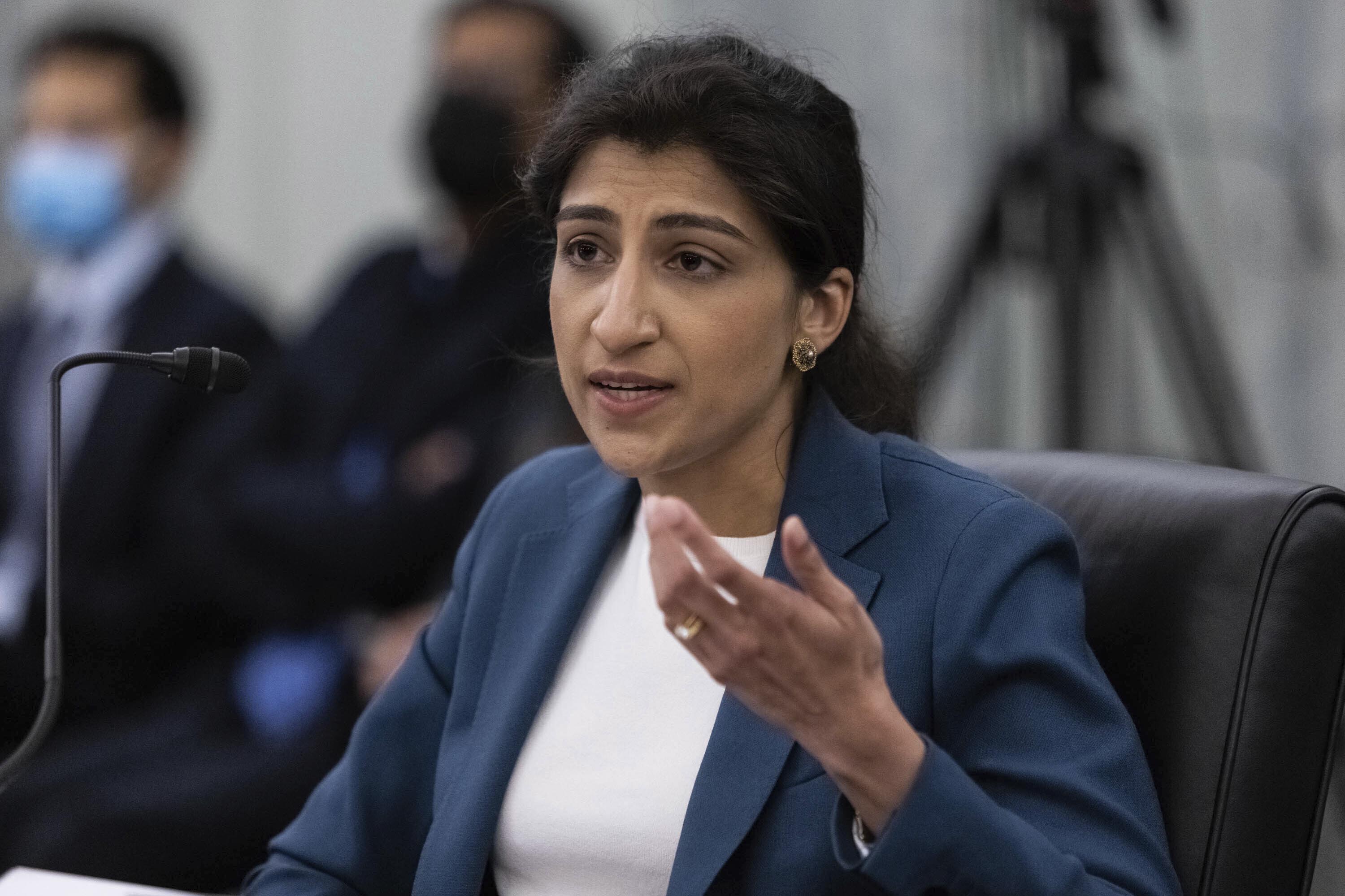 Federal Trade Commission Chair Lina Khan now has the Democratic majority she needs to turn her progressive vision for antitrust and privacy into reality.

The Senate’s confirmation of Georgetown University law professor Alvaro Bedoya on Wednesday will end a 2-2 partisan deadlock that kept many of Khan’s priorities on ice since October.

Now Khan has the leeway to pursue a potential antitrust suit against Amazon, crack down on employers’ non-compete agreements and go after middlemen blamed for increasing pharmaceutical prices — while taking steps to protect consumer privacy. And she may be able to cause headaches for Elon Musk’s deal to buy Twitter.

It’s all part of an aggressive anti-monopoly and consumer-protection agenda that has elated progressive activists and angered many Republican lawmakers since Khan took the helm of the agency in June.

But don’t assume Bedoya will be an automatic yes on everything Khan advances.

“It’s too soon to say that he will be a bulldog on antitrust issues, for instance,” cautioned Mary Lehner, a partner at the law firm Freshfields.

Still, Bedoya’s arrival at the FTC means the agency’s two Republicans no longer have the power to stymie Khan’s priorities. Here are some areas where he could provide the key vote:

The FTC is looking into Musk’s $44 billion bid to buy Twitter, according to Bloomberg, conducting a review of its potential consumer protection implications that is required by law. The agency has a month to decide if it wants to take an even closer look at the Musk sale.

Experts say the deal is unlikely to raise any red flags for antitrust regulators, but it’s still within the FTC’s purview to make sure the deal went through a legally sound process and will not harm competition. The FTC is also investigating Musk’s failure to disclose his initial 9 percent Twitter stake in a timely manner, The Information reported last month.

Anti-monopoly groups like the Open Markets Institute have pressed the FTC to closely investigate and potentially even block Musk’s acquisition. That process would require buy-in from all of the agency’s Democratic commissioners, now including Bedoya.

Khan was a Yale law student when she made a name for herself by writing a law journal article calling for a rethinking of how antitrust laws should apply to Amazon. Now she has the leeway to move forward with a potential antitrust suit against the e-commerce giant, which the agency has been investigating since 2019.

That probe has been largely on the backburner since the FTC’s Trump-era leaders chose to make a priority of their antitrust case against Facebook. But since becoming chair last summer, Khan has dug in on Amazon, revamping some of the investigation’s focus.

That could mean trouble for Amazon’s recently closed deal to buy MGM Studios, which will let Amazon combine its own movie, television and streaming operations with the company that owns the James Bond and Rocky franchises.

Khan never called for a vote on challenging the purchase, anticipating that the two GOP commissioners would block her from going forward. But with Bedoya in place, Khan may have the votes to bring an antitrust suit that could cite the MGM acquisition as part of Amazon’s efforts to maintain its monopoly.

A letter to the FTC from major labor unions after the deal closed outlined several arguments the agency could offer in court — for example, accusing Amazon of using MGM’s content as leverage to force other streaming platforms to use products such as Amazon’s cloud services.

The FTC set the stage for such a suit soon after Amazon announced its MGM acquisition in May 2021. The commission persuaded the Justice Department’s antitrust division to let it review the merger, arguing that the deal could fit into the commission’s monopolization investigation, three people familiar with the talks said.

The agency has also been scrutinizing Amazon’s use of “dark patterns” — confusing design interfaces that are intended to trick consumers into signing up for something online — to gain more subscriptions for its Prime service. Since taking over as chair, Khan has aimed to break down the silos within the FTC that separate competition and consumer protection investigations.

An Amazon suit with both antitrust and consumer protection elements could make a tempting target for Khan to test that new approach.

In an executive order last summer, President Joe Biden urged the FTC to bar or limit companies from requiring workers to sign deals that restrict their future employment. Such non-compete agreements, once the province of CEOs and other high-paid executives, have become ubiquitous throughout the economy, even among low-wage workers. About 1 in 5 Americans today is bound by non-competes — particularly in tech and health care, where the clauses are common.

Non-competes and other factors limiting competition for labor (such as non-disclosure agreements or mandatory arbitration) reduce workers’ wages between 15 and 25 percent, a Treasury Department study released in March found.

The widespread use of non-competes spawned Biden’s interest in improving antitrust and competition, he said during a speech in January.

“It stunned me,” Biden said, “when I realized how many people out there with no special insight to having access to patents or anything else had to sign a non-compete clause — people making hourly wages.”

The Trump FTC had already begun setting the stage for rulemaking on the issue, holding a workshop in January 2020. But action has stalled since the FTC’s two Republican commissioners have said they are generally opposed.

Some within the Biden administration have expressed frustration that Khan didn’t move forward with a non-compete rulemaking last summer, when she still had a majority before the departure of then-Commissioner Rohit Chopra. The presidential interest plus that additional pressure make the start of a non-compete rulemaking likely a high priority for the new Democratic majority.

The FTC has long been interested in so-called pharmacy benefit manufacturers, middlemen who negotiate rebates from pharmaceutical companies and develop lists of what drugs health insurers will cover.

The highly concentrated PBM industry is a frequent target for lawmakers, patient groups and independent pharmacies who accuse the industry of contributing to high drug prices. The top three PBMs — CVS Caremark, Express Scripts and OptumRX — represent nearly 80 percent of the market and are either owned by or own insurance companies. The trio also represents three of the four largest U.S. pharmacies by prescription drug revenue.

But despite significant support, the FTC deadlocked in February on approving a study of the industry because of concerns raised by the agency’s two Republicans. Instead of changing the study — as Khan agreed to in November when facing a similar obstacle to researching supply-chain disruptions — the FTC chair opened a public comment period on the PBM issue, a move that didn’t require a vote from the agency’s other commissioners.

In a recent appearance, Khan said she would revisit a study into the PBM industry once Bedoya is in place.

“We’ve heard a lot about the role of PBMs and particular concern around both the impact of their business practices on independent pharmacies but also on drug costs, including insulin pricing,” Khan said, adding that launching the study was “of great interest” for the agency.

The FTC’s research authority allows it to subpoena companies for documents — information that can later be used in a lawsuit challenging conduct by the PBMs.

With Congress stalled on consumer privacy legislation, the FTC has been laying the groundwork to move forward with rules for businesses on data privacy and security.

It’s an issue that then-Commissioner Chopra had tried to advance before he left the agency in October, using an unorthodox maneuver that GOP commissioners have derisively labeled “zombie votes.”

Chopra left behind dozens of motions for actions he hoped the agency would carry out, including a proposal to begin a privacy rulemaking, according to two people familiar with his votes. Under the commission’s rules, his votes could remain in effect for as long as two months after he cast them — but because Chopra was gone, his proposal could not be edited.

Concerned about the wording in Chopra’s privacy motion and the legality of the “zombie votes” themselves, Khan allowed the motion to expire, leaving the issue for a later day — and Bedoya’s input, a third individual with knowledge of the situation said.

Earlier this year, the agency told the White House Office of Management and Budget — which has some oversight for rulemakings — that it intended to begin a rulemaking this spring “to curb lax security practices, limit privacy abuses, and ensure that algorithmic decision-making does not result in unlawful discrimination.”

A privacy rulemaking is one area where the FTC’s Republican minority may be able to have some influence, though Bedoya’s arrival might lessen their effect.

For more than a year, Republican Commissioner Christine Wilson has said she is open to the idea of privacy rulemaking given Congress’ inaction. But Wilson, a self-described “privacy hawk,” has also publicly stated an “aversion to rulemaking,” likely making her vote conditional on a narrowly tailored rule.

As a privacy expert and former congressional aide, Bedoya is expected to take a leading role in the FTC’s privacy rulemaking. And with a Democratic majority, Khan may be able to move forward with broader rules than would be possible with GOP support.

While those four issues are likely among the biggest immediate priorities for Khan, the FTC told OMB that it wants to move forward with a few other rulemakings as well, including an update on children’s online privacy, making it easier for consumers to cancel recurring subscriptions like gym memberships, and requiring franchise corporations like 7-Eleven, McDonald’s and Subway to disclose more information to people who operate individual locations, such as when they much purchase goods from preferred vendors.