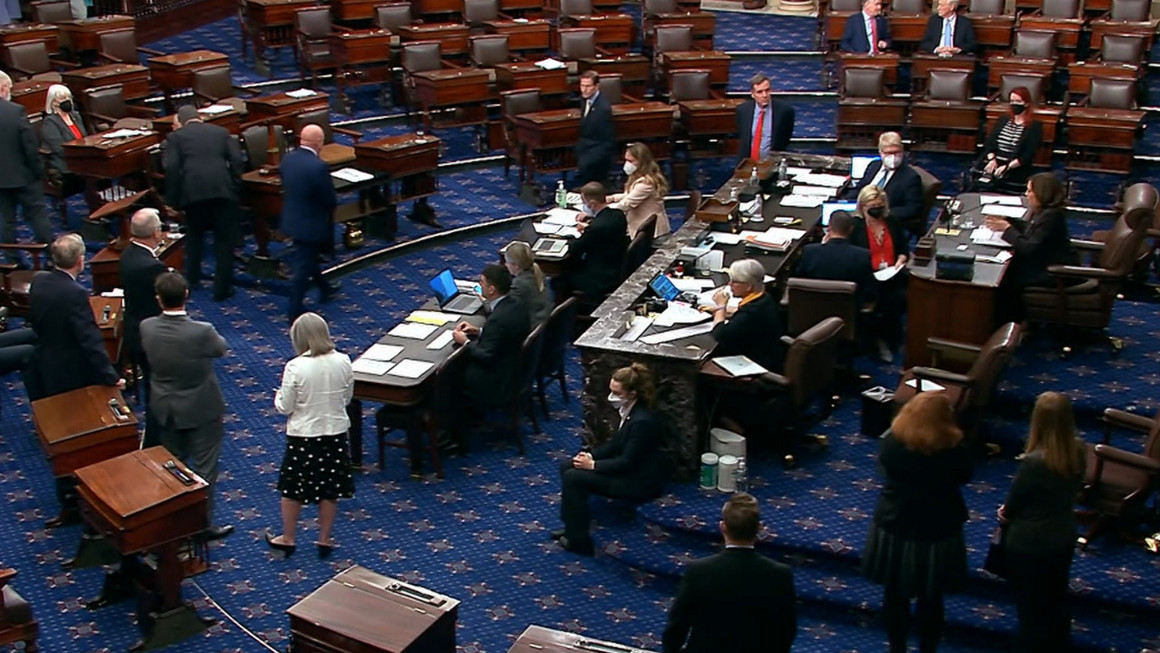 In a 49-51 vote, the Senate rejected the Democratic legislation, with Sen. Joe Manchin (D-W.Va.) and all Republicans voting against the measure. While the outcome was no surprise and mirrored a similar vote on abortion protections the Senate took in February, Majority Leader Chuck Schumer suggested the court’s draft opinion, published by POLITICO last week, had raised the stakes.

“Today’s vote is one of the most consequential we will take in decades because for the first time in 50 years, a conservative majority, an extreme majority on the Supreme Court, is on the brink of declaring that women do not have freedom over their own bodies,” Schumer said in a floor speech Wednesday morning, adding that the decision “will live in infamy.”

The failed vote is the latest example of the constraints Democrats face in a 50-50 Senate. While the possible reversal of Roe has some senators calling for a workaround or end to the legislative filibuster to pass abortion rights legislation, there’s zero chance of that happening this Congress given opposition from Manchin and Sen. Kyrsten Sinema (D-Ariz.). Further, even if they could kill or amend the filibuster, Democrats don’t even have a simple majority that would vote to enact federal protections for abortion.

Both Sens. Susan Collins (R-Maine) and Lisa Murkowski (R-Alaska), who support abortion rights, opposed the Democratic bill. They see that legislation as too expansive and are instead pushing a narrower alternative that would codify the Roe and Casey decisions the Supreme Court is expected to overturn.

And Manchin, who doesn’t support abortion, also announced Wednesday morning that he planned to vote against the measure.

Democrats are “trying to make people believe that this is the same thing as codifying Roe v. Wade. And I want you to know, it’s not,” he argued, referring to the bill’s ban on some state restrictions on the procedure currently allowed. “This is not the same. It expands abortion.”

Meanwhile, Sen. Bob Casey (D-Pa.), who has previously backed abortion restrictions, announced his support for the underlying bill earlier this week. He had voted to move forward on the version of the legislation the Senate took up in February.

Advocates on both sides of the abortion fight have considered it inevitable that the Supreme Court would overturn or at least restrict Roe ever since the court took up Mississippi’s challenge to it last year — an assumption strengthened by the court’s oral arguments on the case in December. But Schumer argued Wednesday that the release of the court’s draft opinion amps up the pressure on lawmakers to act, as the issue is no longer theoretical or abstract.

Many Democrats, however, concede their options to protect abortion rights in Congress are limited. They mainly view Wednesday’s vote as fodder for the midterm elections.

Senate Republicans, meanwhile, unanimously opposed the Democratic bill, with many citing that it would allow abortions later in pregnancy.

“Democrats could not have written more extreme legislation,” Senate Minority Leader Mitch McConnell said Wednesday. “It is chilling that anyone would write legislation like this in 2022 … The American people need to see what the far left has become. So I’m glad the Senate will vote today.”

The Democratic legislation, led by Sen. Richard Blumenthal (D-Conn.), would go beyond codifying Roe v. Wade. It would ban states from enacting many kinds of abortion restrictions, including those currently allowed under Roe that are deemed “medically unnecessary,” like mandatory waiting periods and regulations on clinics, known as TRAP laws. In the latest version of the bill, Democrats removed nonbinding language about transgender rights and the disparate racial impacts of abortion restrictions, amid concerns from moderate members of the caucus. The House passed similar legislation last fall.

Democrats have largely dismissed Collins and Murkowski’s legislation — which would allow those kinds of state limits on the procedure to continue — as insufficient. And, so far, they aren’t planning to bring it up for a vote.

“We are focused on solutions that actually meet the moment,” a Senate Democratic aide told reporters on a Monday night call, on condition of anonymity.

By not specifying exactly what kinds of state laws create an unconstitutionally “undue burden” on people seeking an abortion, the aide argued, under the Collins-Murkowski bill the country would “be left to the same chaos in the courts that we see now.”

Collins and Murkowski, meanwhile, view the Democratic legislation as too broad in overriding state laws. Collins also expressed concerns about its potential impact on hospitals and medical workers with religious affiliations — a point Democrats vehemently dispute.

“She very earnestly wants to codify a national standard that codifies Roe and Casey,” said Kaine, who also supports the broader Democratic bill and abortion rights, though he personally opposes abortion. “We’re having some good discussions. Nothing’s going to happen in the next couple of days but we’re having good discussions.”

Manchin said Wednesday he hadn’t been in those negotiations so far, but “if anyone wants to talk I’m happy to talk.”

Lawmakers and advocacy groups on both sides of the abortion fight are already vowing to make their opponents pay for their vote on the Democratic bill.

Anti-abortion activist groups like the Susan B. Anthony List had lobbied senators on both sides of the aisle to oppose the bill, and plan to run ads against any vulnerable swing-state Democrats who cast their vote for the legislation.

“We’re focused on Democratic incumbents who are anywhere close to a battleground state,” Marjorie Dannenfelser, the president of SBA List, told reporters on a Tuesday call. “Certainly [Arizona Senator] Mark Kelly would be way up there. We spent, very recently, a million dollars attacking him in Arizona for just this reason — his abortion decision.”

Democrats, meanwhile, are equally confident the vote will help mobilize their base this November.

“Unquestionably, the Roe opinion that has been leaked already and the final opinion that’s likely to come will ignite a firestorm of electoral energy. And I think it will be a major motivating factor,” Blumenthal told reporters.

Burgess Everett contributed to this report.