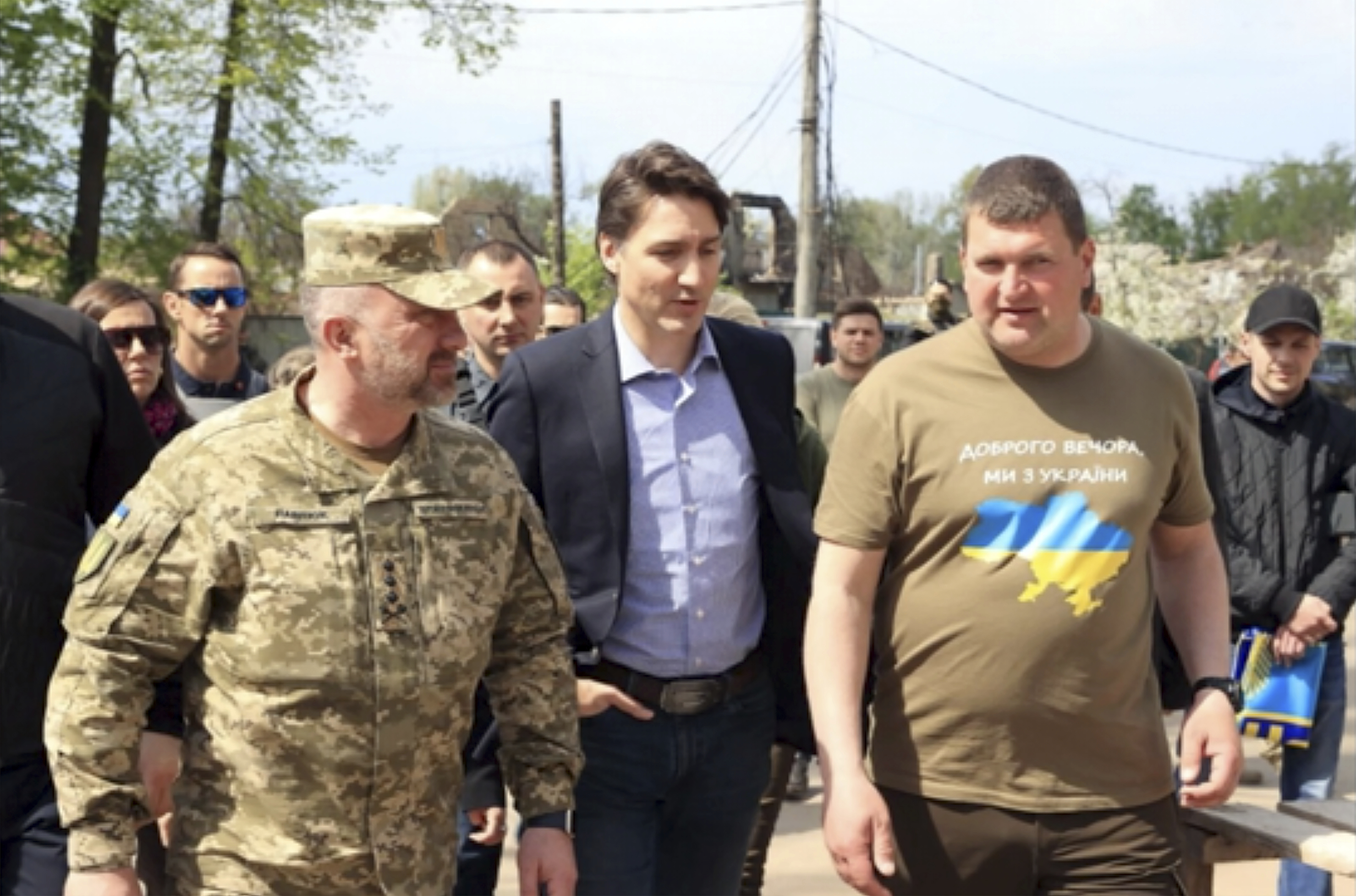 Prime Minister Justin Trudeau made a secret visit to Ukraine on Sunday, joining the list of VIPs who have visited the war-torn country since Russia’s invasion began in February.

Trudeau was joined by Deputy Prime Minister Chrystia Freeland, Foreign Minister Mélanie Joly and Canadian Ambassador to Ukraine Larisa Galadza as he raised the Canadian flag at the embassy in Kyiv and announced its reopening.

“Having the Canadian flag fly over the streets of Kyiv once again is yet another testament to the incredible strength and solidarity of Canadians and Ukrainians,” Trudeau said in video shared by Global News.

Speaking in French, Trudeau said the embassy had been reopened and Canada’s ambassador would be posted there as of Sunday.

In a statement, the Prime Minister’s Office said Trudeau would meet in person with Ukrainian President Volodymyr Zelenskyy to “reaffirm Canada’s unwavering support for the Ukrainian people.”

Trudeau’s visit comes a day before Russia’s Victory Day celebration, which marks the defeat of the Nazis in World War II. Military analysts have been bracing for Russian President Vladimir Putin to use the day to potentially escalate violence in Ukraine.

News of the prime minister’s trip broke Sunday morning when photos of the delegation in Irpin showed up on social media.

Photos shared by the mayor of Irpin, Oleksandr Markushyn, show Trudeau touring the town outside Kyiv, which was heavily attacked earlier in the conflict.

“He came to Irpin to see with his own eyes all the horror that the Russian occupiers had done to our city,” Markushyn wrote on Telegram. “And, of course, he was shocked.”

Trudeau had been facing pressure in recent weeks to visit Ukraine, as several European leaders have done. Joly had suggested as recently as last week that the embassy would reopen imminently, after closing at the start of the war.

“I’m in Ukraine with @cafreeland and @melaniejoly today. We’re here to show our support for Ukraine and its people,” Trudeau said later on Twitter. “Our message to President @ZelenskyyUa and Ukrainians is this: Canada will always stand shoulder to shoulder with Ukraine. More to come on our visit.”

The prime minister is expected to join a meeting of G-7 leaders from Kyiv later Sunday, which Zelenskyy will also attend.

A G-7 leaders’ statement, released Sunday, included a pledge to phase out or ban the import of Russian oil “in a timely and orderly fashion,” to “continue to take action against Russian banks” and to increase “collective short-term financial support” for Ukraine.

“Both leaders underscored their commitment to continue holding Russia accountable,” according to a White House readout of the call. Biden has yet to visit Ukraine since the start of the conflict, though first lady Jill Biden was also in the war-torn country Sunday.

Trudeau told reporters last week that he speaks regularly with Zelenskyy and that his deputy is “always on the phone” with her Ukrainian counterparts.

“They like me to call them at the end of their cabinet meeting, which is usually around 11:30 or midnight their time, so it’s our afternoon,” she confided during an armchair chat with the Vancouver Board of Trade.

Three weeks into Putin’s brutal invasion of Ukraine, Zelenskyy made an 11-minute virtual address to Canada’s Parliament. He appealed to Canada’s Ukrainian diaspora — one of the world’s largest, at 1.4 million people — to offer their “practical support” to the country.

“Volodymyr, in the years I’ve known you, I’ve always thought of you as a champion of democracy,” Trudeau told Zelenskyy before the March 15 address. “And now, democracies around the world are lucky to have you as our champion. Your courage, and the courage of your people, inspires all of us.”

With files from Zi-Ann Lum.